British Forces Gibraltar (BFGib) personnel recently said a fond farewell to Lieutenant Commander Jonathan P Taylor Royal Navy who returns to the UK at the end of his appointment as Queen’s Harbour Master.

The farewell was even more poignant as he will shortly be retiring from the Royal Navy having completed 42 years of service.

Lt Cdr Taylor began his service in Porpoise-class submarines, the first class built after World War 2 and based upon a modified German Type 21 U-Boat.

He went on to serve in Oberon-class submarines throughout the world before making the transition from diesel to nuclear power.

Having spent 14 years as an enlisted man he undertook the Admiralty Interview Board in 1993, from which he was selected to attend the British Royal Naval College (BRNC) Dartmouth as a Special Duties officer where he was awarded the prestigious College Sword.

Following his Officer of the Watch training, he returned underwater, only surfacing to be awarded the ‘top navigator’ award whilst serving in HMS BEAVER.

Lt Cdr Taylor has also been commended for his exceptional operational effectiveness with a 4* Commendation awarded by the Commander United States Pacific Command (USPACOM) for his service at the Naval Ocean Processing Facility, Virginia.

His tenure as QHM has been extremely interesting, the British Forces Gibraltar said in a statement.

“When he joined HQBF in 2017 as the Queen’s Harbour Master, BFGib was in the final stages of project Euston.”

“During the same year, as part of Operation Ruman Gibraltar received and prepared HMS Ocean to deliver humanitarian relief to the Caribbean after Hurricanes Irma and Maria struck.”

“Through Jon and his team’s efforts the ship was able to sail and effect true humanitarian relief to thousands of people.”

In 2018 Lt Cdr Taylor oversaw the first overseas visit by HMS Queen Elizabeth where, together with the ship’s staff, he created the plan that allowed the Royal Navy’s future flagship to berth safely. 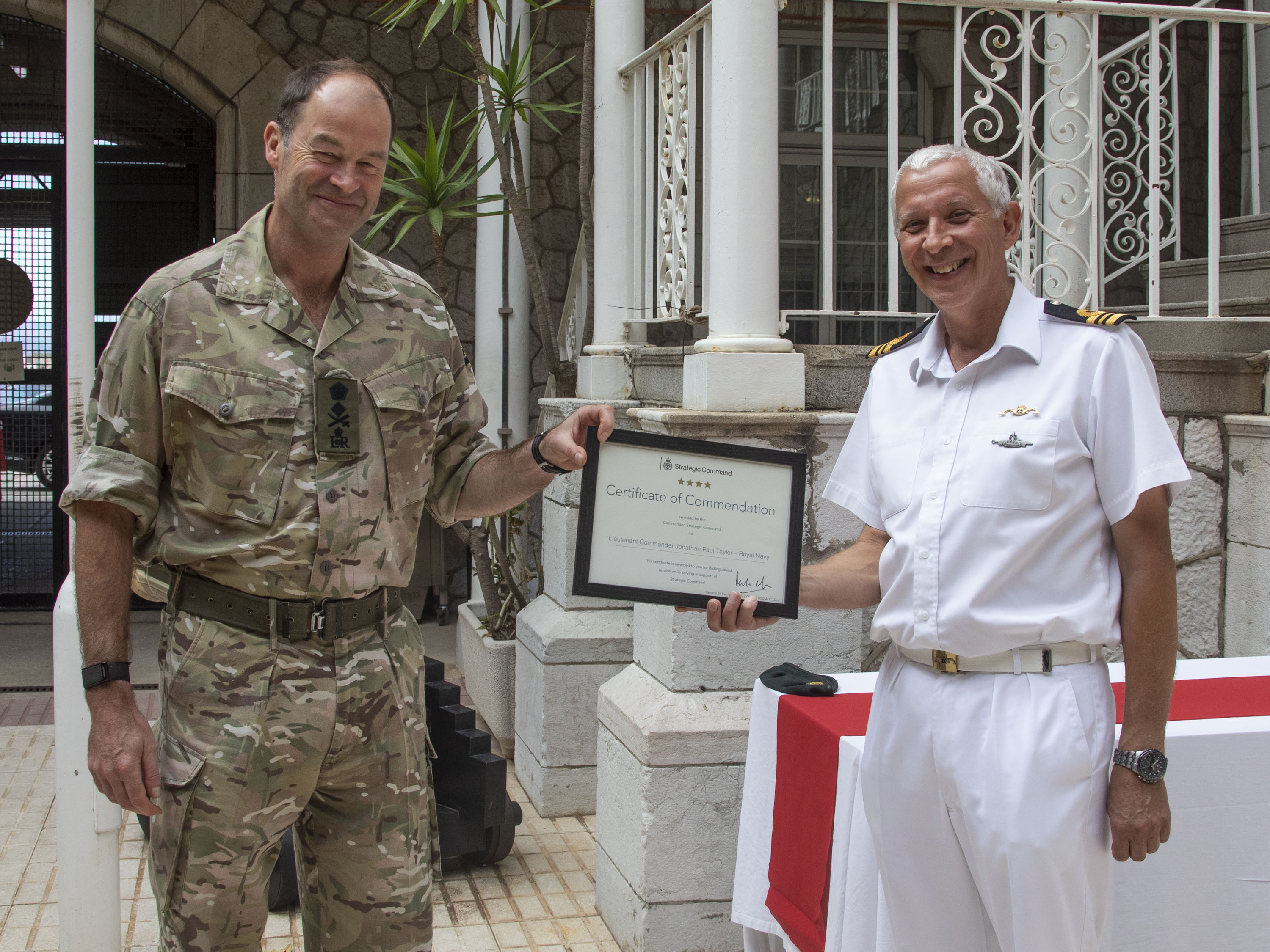 In 2019, the busiest year of submarine operations Gibraltar has seen for over 20 years, Jon and his team were also able to support the simultaneous berthing of two Ship Submersible Nuclear (SSN) submarines in Gibraltar when HMS Talent and the USS Olympia came alongside.

“Without the work of Jon and his team Talent would not have been able to provide strategic effect to the Government,” British Forces Gibraltar said.

“During his time as the Queens Harbour Master, Lt Cdr Taylor has ensured that the MOD continues to operate the harbour facility safely and his work means that Gibraltar is on a path to be better prepared for a less certain future. Jon also contributed to the development and prosperity of Gibraltar by nurturing strong relationships across the entire maritime enterprise.”

“Working in his own time, he supported the Gibraltar Port Authority and helped make the first ‘Maritime Week, Gibraltar’ a success.”

Commodore Steve Dainton, Commander British Forces Gibraltar not only thanked Lt Cdr Taylor personally for his excellent service to the Command, the RN, and Gibraltar but also reflected the positive impact he has had whilst serving as the QHM.

“Jon’s dedication and attitude have been an example to all who meet him,” Commodore Dainton said.

“Of course, British Forces Gibraltar’s ability to respond to the extraordinary means that it must maintain the ordinary to the highest standards and Jon Taylor goes beyond what is normally expected.”

“I am thankful that you have the vocation for naval service. You have been instrumental in the continued operation of HMNB Gibraltar for the past three years and you have set the bar of expectation very high for your relief. We wish you the very best in your future endeavours.”

During his last week as QHM, Lt Cdr Taylor was also awarded another 4* Commendation, this time from UK Strategic Command.

As has become the traditional recently for personnel leaving after many years’ Service, friends and colleagues came together in a socially-distanced gathering to line the Naval Base to bid farewell to Jon.