London held a vigil on Monday for two people killed near London Bridge by a convicted terrorist who had been released early from prison, an incident that thrust criminal justice to the centre of a campaign 10 days before a national election.

Jack Merritt, 25, and Saskia Jones, 23, both former students active in a programme on prisoner rehabilitation, were killed on Friday when Usman Khan went on the rampage with kitchen knives at a conference about the programme beside London Bridge.

At the vigil, London's mayor, Sadiq Khan, said the British capital had gathered "in a spirit of defiance to say that London will never be cowed or intimidated by terrorism."

"The best way to defeat this hatred is not by turning on one another but is by focusing on the values that bind us to take hope from the heroism of ordinary Londoners and emergency services who ran towards danger."

Friday's attack has become a political issue ahead of the December 12 election. Prime Minister Boris Johnson has promised a tougher stance on the release of prisoners if his Conservatives win a majority, criticising the Centre-left opposition Labour Party's leader Jeremy Corbyn as soft on terrorism.

Labour says cuts to policing and social services under a decade of Conservative leadership have made it harder to fight militancy, to track former prisoners and to reintegrate them.

Confronted by bystanders, including a Polish man brandishing a narwhal tusk and others with fire extinguishers, the attacker wearing a fake suicide vest was wrestled to the ground. He was then shot dead by British police.

Mr Johnson and Mr Corbyn both attended the vigil in Guildhall Yard, in the heart of the City of London, held to honour the dead, those injured, the emergency services and the members of the public who intervened.

The attacker had been sentenced to a minimum of eight years in 2012 for offences including plotting to blow up the London Stock Exchange and British parliament. He was released a year ago without an assessment from the parole board of whether he was a threat to the public, despite a warning from the sentencing judge that such an assessment should be made.

"I absolutely deplore the fact that this man was out on the street, I think it was absolutely repulsive and we are going to take action," Mr Johnson, whose party has been in power since 2010, said on Sunday.

BLAME GAME
Mr Corbyn said Conservative cuts to community policing, probation, mental health, youth and social services could "lead to missed chances to intervene in the lives of people who go on to commit inexcusable acts".

A veteran peace campaigner, Mr Corbyn has also said convicted terrorists should not necessarily serve their full prison terms, and has long said that British foreign policy in the Middle East has played a role in motivating militants.

Amid the political and media rhetoric, the father of one of the dead called on the media and politicians not to use his son to justify division or hatred.

"Don’t use my son’s death, and his and his colleague’s photos - to promote your vile propaganda," David Merritt said in a tweet above images of the front pages of right-wing tabloids, the Daily Mail and Daily Express, both of which described a government plan for a "blitz on freed jihadis".

"Jack stood against everything you stand for - hatred, division, ignorance," he said.

Both the dead were involved in the University of Cambridge's Learning Together programme to help educate and rehabilitate prisoners, which was holding the event where the attacker began his rampage. 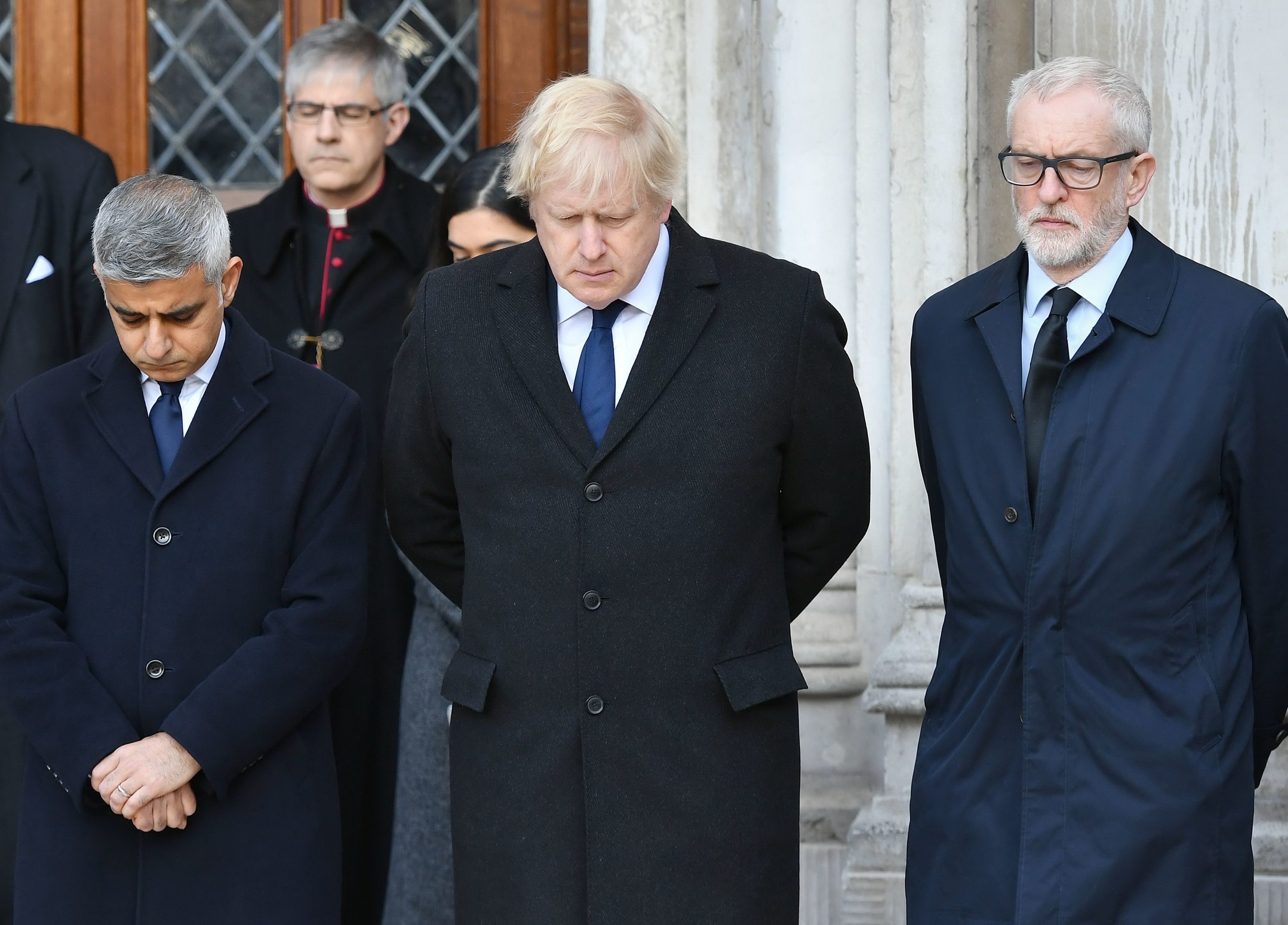 London Mayor: Best way to defeat hatred is by focusing on values that bind us

Sadiq Khan called on Londoners to come together "in a spirit of defiance" against terrorism during a vigil for the victims of Friday night's attack.

The London Mayor was joined by Prime Minister Boris Johnson and Labour leader Jeremy Corbyn at the memorial to Jack Merritt and Saskia Jones in Guildhall Yard in the City of London on Monday morning.

After a minute's silence at 11am, Mr Khan said: "We come together this morning as Londoners to remember, to honour and to mourn the innocent lives lost as a result of this horrific terrorist attack on Friday.

"The best way to defeat this hatred is not by turning on one another but by focusing on the values that bind us."

The mayor thanked the public and members of the emergency services who "ran towards danger, risking their lives to help others they didn't even know".

Mr Khan called on Londoners to "draw inspiration from the lives of Jack and Saskia who, from a very early age, chose to dedicate themselves to helping others".

He added: "We come together in condolence but also in a spirit of defiance to say that London will never be cowed or intimidated by terrorism."

The ceremony was led by Bishop of London Sarah Mullally, and Mustafa Fields, director of multi-faith organisation Faith Forums for London, also spoke.

Mr Fields offered prayers for the victims and emergency services and "all the Muslims grieving at the attacks in the name of their faith".

After the vigil, those present entered the Guildhall to sign a book of condolences to the victims.