There were scenes of traffic chaos across Gibraltar on Friday as local and Spanish-registered vehicles queued up to panic buy petrol ahead of next week’s planned hauliers strike in Spain.

But despite the frenzied buying, the Gibraltar Government reassured the members of the public that contingency measures are in place to ensure the ongoing supply of fuel in Gibraltar.

Gib Oil was working towards bringing in more unleaded fuel across the frontier before the weekend to ensure there is enough stocked up.

There is no threat to the continuity of supply to diesel as this comes to Gibraltar via the sea.

The message from both was clear: there is no need to panic buy.

The race to buy fuel began on Thursday night as all petrol stations in Gibraltar saw large numbers of driver queuing up in the vehicles to buy petrol.

This continued early on Friday morning and the Royal Gibraltar Police had to deploy extra officers to manage the flow of traffic and start a diversion at Morissons Supermarket so that shoppers could enter the carpark at Harbour View’s Road and exit the normal way. 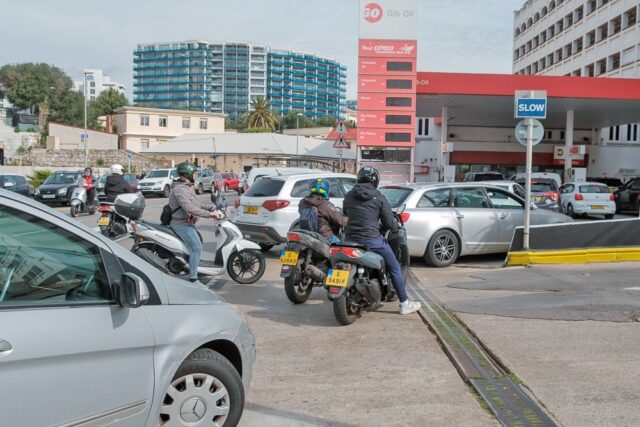 The Spanish lorry drivers have cited an increase in the price of fuel and fears of a shortage of supply as the reason for next week’s proposed strike.

According to Spanish news reports fuel prices have increased by 36.58% in comparison to this week last year.

The war in Ukraine and economic sanctions against Russia have shaken the price of fuel around the world, with retail gasoline and diesel prices soaring to record highs in many countries across the world this week.

Mr Murphy said he believes the panic buying over the past 24 hours has been a result of a few factors, including the war in Ukraine pushing up oil price globally, and the fact that these increases have been reflected in retail prices in Spain far quicker than in Gibraltar.

The planned strike in the Spanish transport sector for Monday and its perceived impact of supply was cited as another reason.

“Our suppliers have said that unless some major transport union in Spain steps in and this escalates dramatically, their plans are business as usual for our supplies on Monday, Tuesday, Wednesday, and going forward,” Mr Murphy said.

“Things with the strike can change overnight and discussions are ongoing.”

“There are two major issues here and one is the strike, and the other is the fact that fuel prices in Spain have raised dramatically.”

According to Gib Oil’s market research, the cheapest price for diesel in the Campo was priced at €1.87 per litre, while in other places it had exceeded the €2 mark.

Since Russia’s invasion of Ukraine some 16 days ago, the global price of a metric tonne of oil has shot up from 700 to 750 US dollars to 1,400 US dollars per metric tonne. 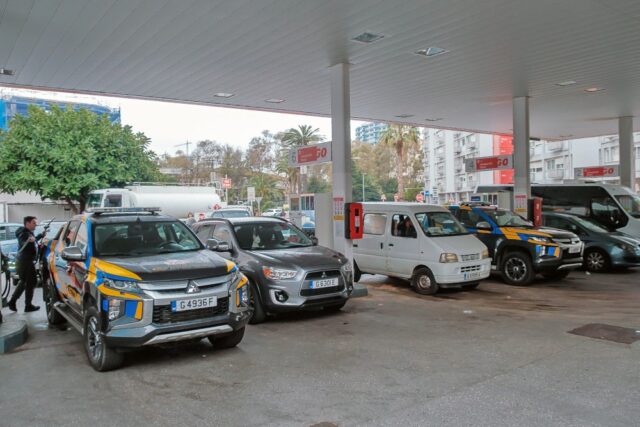 “This price has been reflected globally in the price for consumers,” he said.

“Spain has pushed up its price quicker than Gibraltar, where Gib Oil, and possibly other vendors, have wanted to mitigate the rate of increase.”

“Prices in Gibraltar are usually cheaper than in Spain, but given that Spain has pushed up its prices up more quickly, that differential has increased in recent days, making Gibraltar’s petrol stations more attractive for Spanish drivers.”

“We follow month-average pricing, but Spain has immediately implemented the spot price per day, which is much higher than what the price might be.”

Gib Oil is having to push its prices up daily to lessen the differential and reflect the rising price of a barrel of oil, Mr Murphy said.

“Gib Oil is monitoring the market where prices are changing by the hour and it is difficult because of the war,” he added.

“Price reflects our acquisition costs and we will have to do that.”

“In terms of supplying the market we have put measures in place so that we have continuity in the supply for this weekend and beyond.”

“We brought additional trucks in from Spain on Friday and they are in our terminal in North Mole, and we will be filling the petrol stations over the weekend.”

“Our message to the public is not to panic buy, there is no need to rush out to buy fuel.”

“If the situation escalates and it becomes a general strike, there is no issue with diesel because that comes in via the sea using our own tankers.”

“With petrol we are monitoring the situation and we are working with our suppliers in Spain and other alternative means of supply to ensure that we can continue to supply the general public.”

In the short term, if Gib Oil sees that the situation becomes difficult and it reaches a particular level of stock, the company will not go beyond that stock and its yacht terminal and its Line Wall Road station will be dedicated to emergency service and public vehicles.

“If we restrict use to those groups only, we have two weeks’ supply but we are not envisioning a long-term issue here,” Mr Murphy added. 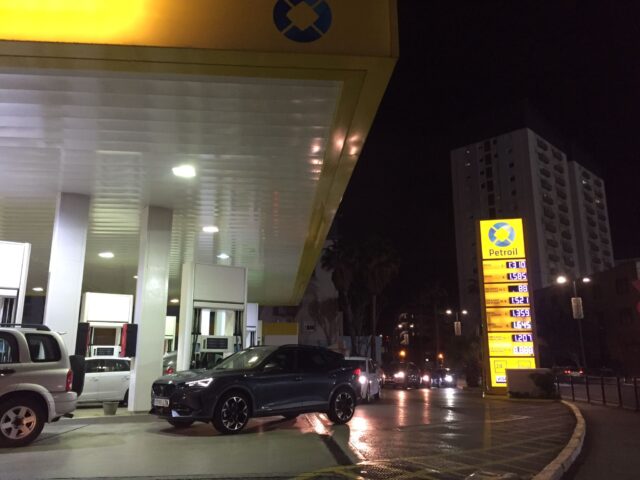 For its part, the Gibraltar Government told the Chronicle local fuel companies have contingency measures in place in order to mitigate the impact of the Spanish hauliers’ strike.

“This includes the filling up of retail stations, yacht terminals, tanks and bunker barges,” it added.

“Impact on diesel or Marine Gasoil (MGO) is negligible as this is supplied by sea, and there is sufficient supply of Aviation fuel.”

“The Gibraltar Government therefore does not expect there to be an impact on the supply or price of electricity locally as a result of the Spanish hauliers’ strike.”

The Government spokesman said a number of local fuel companies use 100% own-employed drivers and, therefore, they report that they expect there to be limited impact of the strike on supply to Gibraltar.

“The availability of petrol in Gibraltar is currently affected by panic buying, both by Gibraltarians in anticipation of the strike and by Spanish consumers affected by overnight price increases across the border,” the Government spokesman added.

“The Gibraltar Government is actively monitoring the situation as it develops and is in constant contact with the main local fuel supply companies.”

“Contingency measures are in place to ensure that there is sufficient supply of petrol for essential service and public service vehicles and vessels in the event that the strike has a prolonged impact on the availability of petrol in Gibraltar.”

“The Gibraltar Government reminds the public that the stockpiling of large quantities of fuel is extremely dangerous and is prohibited under the Petroleum Act.”

“We strongly discourages people from buying more petrol than they normally would and they immediately need.”

A Gibraltar-registered vehicle was stopped by the RGP on Friday after two large canisters filled with fuel were found on the passenger seat of the vehicle.

“We would like to remind the driver of this vehicle that the stockpiling of large quantities of fuel is extremely dangerous and is prohibited under the Petroleum Act,” the RGP said on their Twitter.

A spokesman for the police said officers had seized the cannisters of fuel and the Gibraltarian driver “will be dealt with in due course”.

The story has been updated to correct fuel prices. 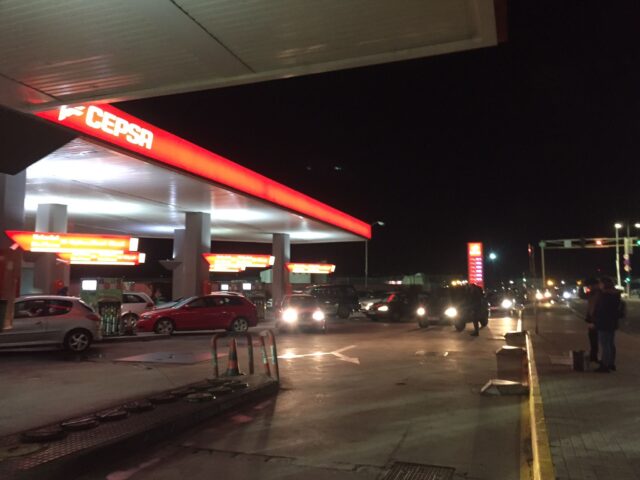