Mayflower captain's home to be opened to public

The house where the captain of the Mayflower once lived is to open as a tourist attraction, as his Essex hometown seeks to reaffirm its links to the story of the famous ship.

The Mayflower set sail from Plymouth in the UK to the New World in 1620, carrying the Pilgrim Fathers to North America, but the ship was registered in Harwich in Essex, where its captain, Christopher Jones, was from. 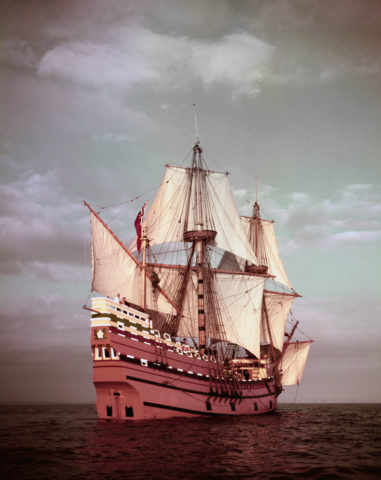 Its landing site was named Plymouth Rock, the settlement was called Plymouth Colony, and it developed into the town of Plymouth, Massachusetts.

"They are part of this thing."

But he said it was only by chance that the Mayflower went to Plymouth, after an accompanying ship sprang a leak and they both turned back.

If this had not happened "Plymouth wouldn't have come into the equation", he said, adding: "If that hadn't happened and the two ships had gone across there, would there be Plymouth Rock?"

He said that Harwich was where the Mayflower was registered, and its captain Christopher Jones once lived in King's Head Street in the town.

The house is being leased by the local council and will open to the public for the first time next year, 400 years after the ship's voyage, with historical information displayed inside.

His one son from his first marriage died in 1596. He had eight children with his second wife.

Mr Whittle said that the rebuilt church and the guildhall, where a copy of the charter is displayed, will be included in Mayflower guided tours next year.

He said the first person to step ashore at Plymouth Rock was Harwich barrel-maker John Alden, whose descendants are said to include Marilyn Monroe and Dick Van Dyke.

It is known that the Mayflower, a "very popular name" for ships at the time, is the vessel from Harwich, due to the will of passenger William Mullins, who died in America, Mr Whittle said.

He said there were three witnesses to the will, including Christopher Jones of Harwich, captain of the Mayflower.

He said that "people in America don't know about Harwich" and that visitors are "absolutely astounded" when they are told.

Mike Carran, head of sport and leisure at Tendring District Council, said: "I think the beauty of this is, if Harwich has been lost out of the story to some degree in the US, this is the opportunity to re-cement those links."

He said sites around the UK that are connected with the Mayflower have worked together with the US travel trade to create new Mayflower tours.

More than 30 million people can trace their ancestry back to the 102 passengers and about 30 crew of the ship, according to the Mayflower 400 website, which was established ahead of the anniversary year.

A new visitor centre is being created in Harwich, and images will be projected on to Captain Jones's house on Friday as part of an international Mayflower 400 opening event called Illuminate, involving locations connected with the Mayflower.

In UN decolonisation seminar, a Spanish nod to Gibraltarians as a people