The Mayor of Gibraltar, Christian Santos, yesterday thanked the Equality Rights Group for its work championing gay rights in Gibraltar over many years, and vowed to follow the group’s lead.

“I am in a position right now that is very privileged to be as a gay person,” Mr Santos told the men.

“Because it is a role that has a voice that so many people have fought for. People like you,” he added, addressing both Mr Alvarez and Mr Trico.

He noted that he had left the Rock and, by the time he came back, the ERG had already achieved so much and done the fighting for him.

“I am just so happy that I can be part of all this and I can say ‘thank you’ to people like you,” he said.

Mr Alvarez told him they were grateful to see Mr Santos in the position as it was the result of lots of years of work to see somebody that is able to be totally open, to come out and hold a position that has some weight in the community.

Mr Santos, in turn, said it was their work that led to a situation where it was fine to have an openly gay man as the Mayor and this was something that the Government was also happy to promote.

“It is because of people like you,” he told them.

“I have done very little other than reap the fruits of your labour.”

“This is now the chance for me to continue that.”

Mr Alvarez told him it was a generational issue.

“Our generation were in a position where we had to get the whole thing going and it took 21 years. But your generation now needs to take it on. And we are glad to see you are heading that leadership,” said Mr Alvarez.

He added that new groups can be created and not just ERG doing all the work and it would be great to see young people now take the burden.

The men noted that legally, equality is “more or less there”, but that the attitude of some members of the community needed to change. In addition, equity was now an issue to be worked at.

“Fine, we can put a man and a woman, a straight person and a gay person on the same standing but they don’t necessarily have the same opportunities and that is equity. And that is where we need to go next,” said Mr Alvarez.

He also noted that as more members of the LGBTQ+ community age and will be in need of care, there is concern that care facilities will not be set up for them.

“These are not yet important issues in Gibraltar, but they will be in 10 to 15 years’ time,” he said.

“It is happening in the UK and everywhere else, so we need to look forward and that is where younger people such as yourself can take the lead.”

When the men finished discussing achievements and goals, Mr Santos was presented with the artwork created by Ms Attias when she was a teenager. 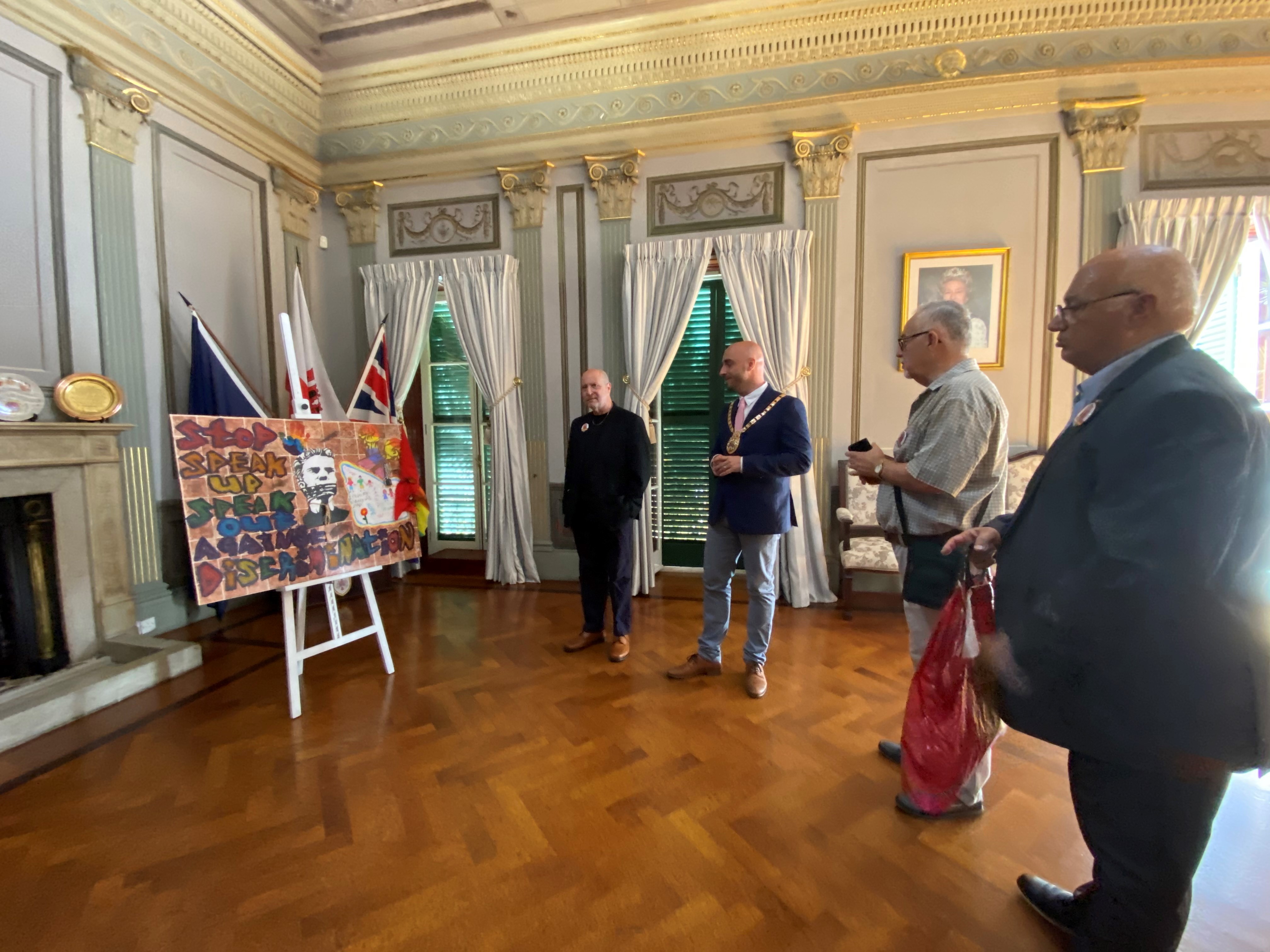 The painting was originally donated to the group in June 2013 in recognition of the NGO’s work in human and civil rights for all.

“This was one of Allyson’s projects she did for her GSCEs, one of them. I know that a lot of thinking and a lot of thought went into this final product,” said her father, Mr Attias.

When Ms Attias was creating the piece, she would not let her family see the process and instead opted for a big reveal when it was completed.

“When I saw the final product, I could see the message,” he said.

“You can see that this sketch is very childish but it is supposed to be. It is an actual wall in a common area anywhere in the world where people will testify their thoughts on a certain project.”

“You have the drawing that was supposed to be done by children. Then obviously you get the struggle of the community against the discrimination and what gay people have gone through.”

“And hence why she did the flag burnt as well as it shows the struggle.”

She achieved a high mark in her GCSE for the work.