Meet the star species of David Attenborough’s A Perfect Planet

Photo of a tiny male flamboyant cuttlefish attempts to mate with a much larger female in Indonesiaís Lembeh Straight. PA Photo/Silverback Films. WARNING: This picture must only be used to accompany PA Feature TRAVEL Attenborough.

By Sarah Marshall
From volcanic eruptions responsible for crafting much of the earth’s surface, to weather patterns increasingly dictating our modern way of life, forces of nature are responsible for constantly reshaping the planet we call home.

In a pioneering break from traditional natural history documentary-making, new five-part BBC series A Perfect Planet studies these powerhouses and looks at how different species have adapted to their demands.

Narrated by Sir David Attenborough, programmes cover the ocean, the sun, weather, volcanoes and perhaps the most powerful force of nature in recent times: humans.

Stark warnings about climate change are woven into each episode, but there are also plenty of high-spirited wildlife sequences, featuring characters so weird and wonderful, they promise to steal our hearts.

Discover some of our favourites and find out how to see them in real life.

Flamboyant cuttlefish
Although measuring less than 5cm long, this tiny muck dweller is big in stature, and rightly earns its reputation for being one of the ocean’s most colourful characters. Choosing to walk across the seabed rather than swim, it can easily camouflage both the texture and colour of its skin to match surroundings. But when a female comes into view, the super-charged suitor gives an electrifying display, dazzling his larger lady (she’s four times the size) with a jukebox of flashing lights. 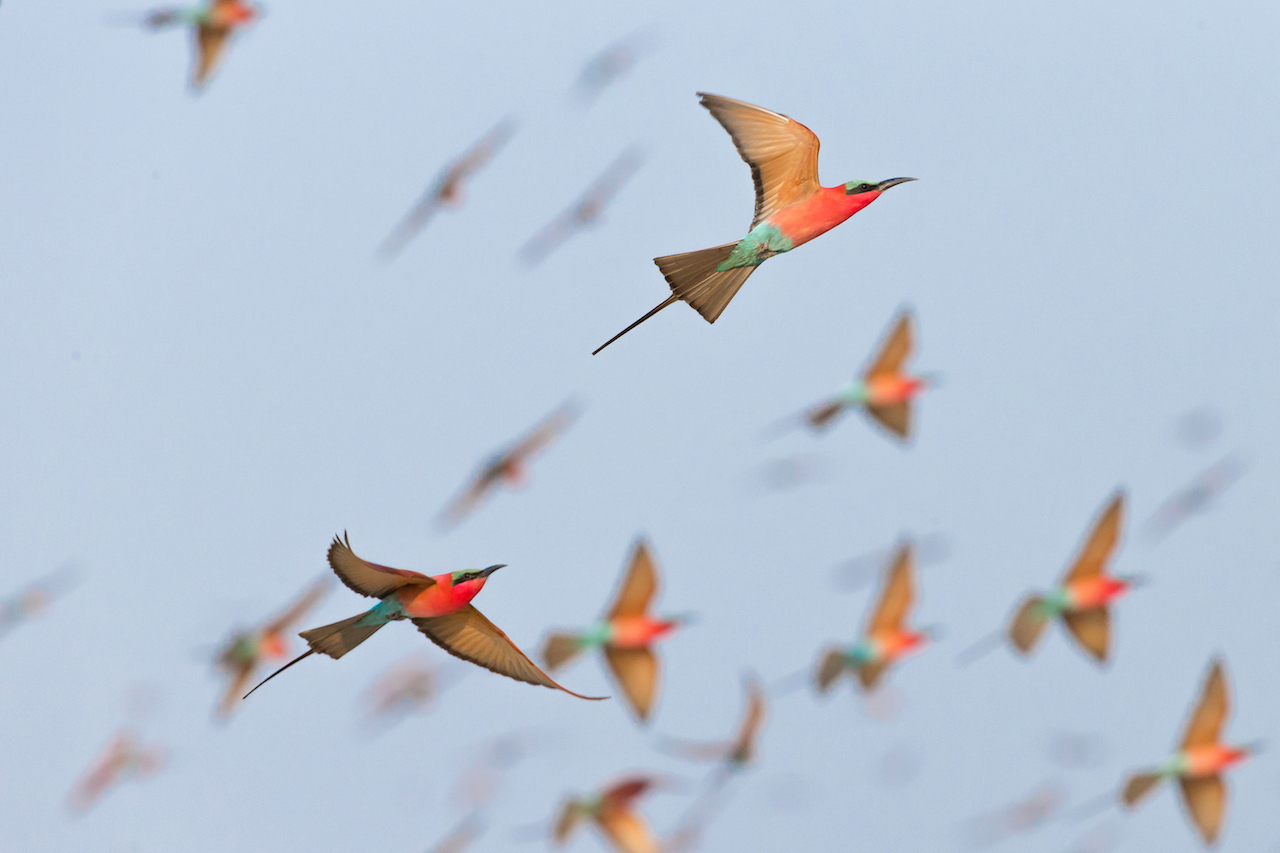 Carmine bee-eaters
Fluttering like petals of sunset-red confetti, these elegantly attired birds decorate Zambia’s dry, barren riverbanks when they migrate there to nest. Out of reach from predators, their waterside apartments were once a safe place to rear chicks, but droughts and changes in weather patterns are increasingly rendering them unstable.
“This is not just a little fantasy; we are facing a real crisis,” says Sir David Attenborough, referring to our rapidly changing climate. And it’s not just bee-eaters who are at risk. If we warm the earth to such a degree that the Arctic melts, every big city in the world will be underwater, warns the sage conservationist.

Lesser flamingos
Described by Sir David Attenborough as one of the most extraordinary sequences filmed for television, scenes of flamingo chicks racing across the caustic soda flats of Tanzania’s Lake Natron will stay with audiences forever. Sitting in the shadow of Ol Doinyo Lengai, Tanzania’s most active volcano, the lake has almost the same PH value as household bleach, keeping most predators at bay. But adults will only nest when water levels are low enough for the centre of the lake to dry out, which could happen just once every five years, making it one of the natural world’s rarest spectacles.

“Up until relatively recently, more people had landed on the surface of the moon than had stood amongst the flamingos in the middle of the Rift Valley,” says cameraman Matt Aeberhard.

Red crabs
Imagine a crab who’s afraid of water? It’s hardly a recipe for survival, but somehow crustaceans on remote Christmas Island have managed to find a way to procreate without getting their claws too wet. Every November, during rainy season, millions make their way from forests in the highlands to the coast, to spawn in the warm Indian Ocean surf. Picking the right night – or even beach – is tricky, but the display is like nothing else.

“We’d try to grab a few hours’ sleep before the main event in an SUV near to the spawning ground,” recalls camera woman Sophie Darlington. “But it often descended into hysteria as the odd 4kg robber crab attempted to join us in the sweltering heat.”
(PA)