The MoD confirmed it had agreed a £9.9million deal with Merseyside-based Marine Specialised Technology (MST) to construct the vessels.

The six-year contract, which will support 30 jobs and create a further 25, will see construction of the two boats beginning in July 2020 and will take approximately 18 months, with the first boat due to be delivered in 2021/22 and the second in 2022/23. 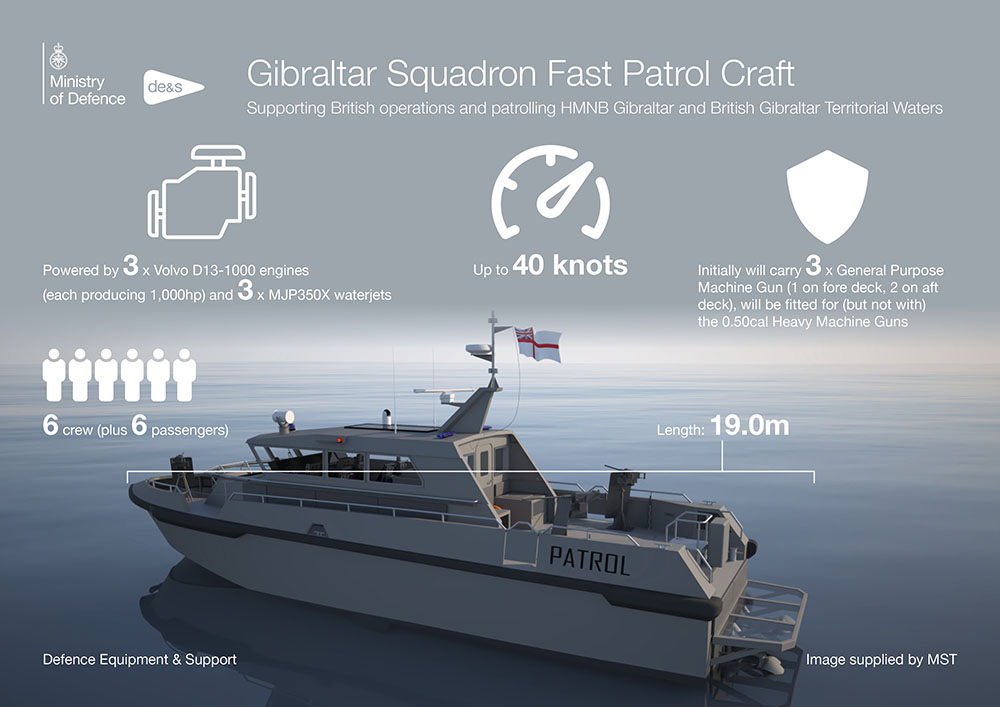 The remainder of the contract will provide an additional four years of local In-Service Support.

Both boats, which have been designed specifically with Gibraltar in mind, will be used to patrol British Gibraltar Territorial Waters.

They will also support British exercises and operations in the area and will keep close watch over Gibraltar’s shores, the MoD said.

“Putting technological advancement at the fore, the vessels will demonstrate UK sovereignty of Gibraltar as well as providing force protection to designated visiting UK and Allied military vessels,” the Ministry said in a statement.

Defence Minister Jeremy Quin said: “These new vessels will enable the Royal Navy to maintain the security of British Gibraltar Territorial Waters and protect British, NATO and Allied ships transiting through the region.”

“This contract will also support highly skilled jobs across the UK which clearly demonstrates how national security and regional prosperity go hand in hand.”

In a statement British Forces Gibraltar said the replacement of HMS Scimitar and HMS Sabre with the P2000s had brought a significant increase in capability to both tackle greater sea states and provide much improved crew habitability.

The vessels, which are a stop-gap while the new boats are built, are older and slower than the Scimitar-class patrol boats, but have longer range and are better equipped to deal with rough seas.

“Dasher and Pursuer will now assume the duties previously delivered by Scimitar and Sabre, providing security and demonstrating the sovereignty of British Gibraltar Territorial Waters,” the statement said.

Lt Cdr Lloyd Cardy, the Commanding Officer of the Squadron, said: “The arrival of the two P2000s to the Squadron is of great benefit to our personnel and the mission.”

“We are suitably equipped to counter the challenges of the local environmental conditions and the added size of the craft offers an increase to our physical presence on the water.”

“We are very proud to welcome the two units to the Squadron as an interim replacement until the newly designed craft arrive.”