Prostate Cancer Gibraltar’s awareness campaign ‘Movember on the Rock’ was launched by the Mayor Christian Santos at an event in City Hall on Monday morning.

Also present at the event was Derek Ghio the chairman of PCG, the Chief Minister Fabian Picardo, former mayors, other dignitaries and GHA health workers.

Movember is a month where ‘Mo bros’ grow a moustache in a bid to raise awareness of the disease and ‘Mo sisters’ support these men.

Mr Santos credited Mr Ghio and the PCG for bringing such awareness to prostate cancer symptoms on the Rock.

“And to encourage all men to be proactively have PSA screening tests,” he said.

“I cannot stress enough how important raising awareness is. Early detection of prostate cancer can literally save lives.”

He stated that the reality is prostate cancer can affect any man but that it is not just the individual themselves that is impacted, but also their families, friends and co-workers.

“Prostate Cancer Gibraltar can offer practical support, helping with information, advise and counselling all very welcomed by those dealing with this. They do not need to do this alone,” he said.

“The charity also strives to better the health services provided to men not just with prostate cancer but also prostate related diseases.”

“They work alongside our health services to ensure all have access to the best care available.”

“Because of the great work PCG does I am extremely proud to have been invited to launch the ‘Movember on the Rock’ campaign."

Finally the Mayor thanked all present, who included family members of loved ones who have battled prostate cancer, as well as representatives of other cancer charities on the Rock. 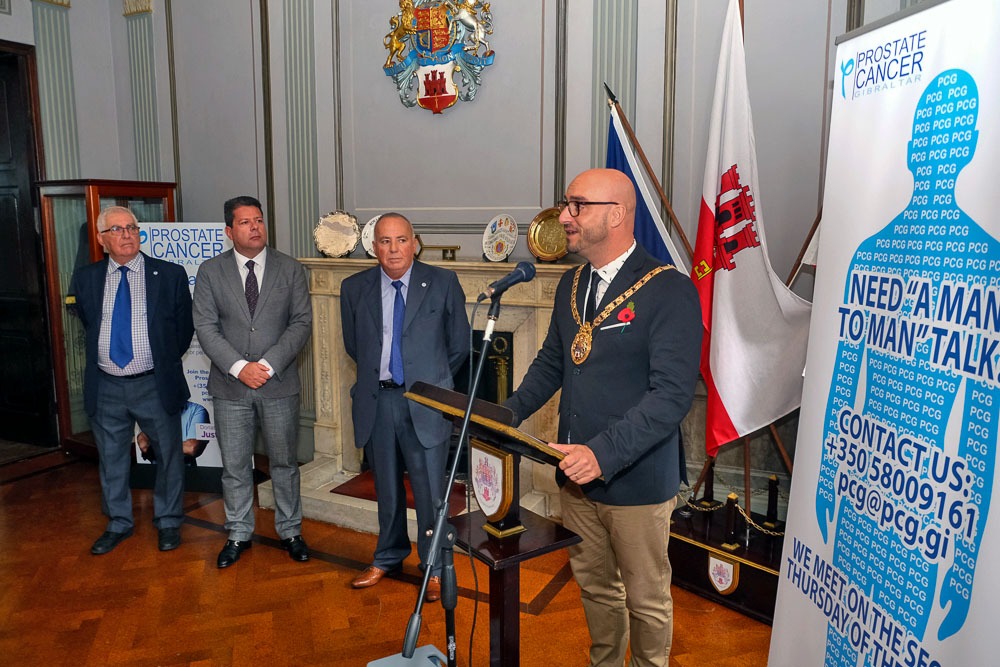 Addressing those present, Mr Ghio reminded everyone of the Government’s recent meeting with PCG where the charity was thanked for its fundraising efforts towards new medical equipment for the GHA’s Urology Department.

“Three weeks ago the Chief Minister announced that a new targeted prostate biopsy medical equipment would be introduced and operational by the GHA by the 30th of this month,” Mr Ghio said.

“Thank you as without your personal interest in our project and support to overcome the many obstacles in our way we would never have achieved the introduction of this service.”

The transperineal 3D MRI and ultrasound system image fusion biopsy medical equipment allows for more precise readings that also reduces the risk of infection for patients who are undertaking biopsies.

“It will allow patients to undergo a less invasive procedure and this will go hand in hand with an introduction of a 35 pathway in our quest for an early diagnosis,” Mr Ghio said.

“This medical procedure will not only mean it is repatriated to Gibraltar but it will also serve to vastly reduce the anguish and anxiety felt by patients without the need to travel abroad.”

Kusuma Trust Gibraltar and Prostate Cancer Gibraltar have jointly funded the equipment and have donated it to the GHA.

The cost has been approximately £200,000. The funds were raised over a period of a few years.

Mr Ghio thanked Kusuma Trust, other corporate sponsors and all who donated.

He explained that MRI imagining is crucial for the detection of prostate cancer, before any symptoms may appear. The scan takes 15 minutes.

With this in mind the PCG hopes the scan will form part of a screening programme for men over 50 years of age.

“Prostate Cancer Gibraltar would like to see this screening programme with the use of an MRI scanner introduced in Gibraltar in the next two years,” said Mr Ghio.

“One of the advantages being that the MRI scan can detect prostate cancer before any symptoms are manifested.”

“We wish to see patients who need an MRI to have this done at the GHA and not have to travel abroad.”

“We plan to have initial discussions with the Chief Minister and the senior management of the GHA later this month,” he added.

In addition, Mr Ghio noted that PCG will be inviting other cancer charities to participate in the project at the appropriate time.

Mr Ghio took a moment to reflect on the lives of men who have been instrumental in advocating for prostate care in Gibraltar, including the first chairman John Diaz.

He also thanked the staff members of the GHA who take care of all the prostate patients giving a special mention to Dr Paul Hughes and to Dr James Allan the consultant urologists.

“The difference they have made and are making has not gone unnoticed,” he said.