By Sherna Noah
The National Gallery has finally raised the last £2 million needed to buy a painting dating from the 17th century - more than 20 years after its first attempt.

He painted the biblical scene in around 1630, during his 12-year residence at the court of King Charles I in London.

The painting, depicting the infant Moses in a basket, was a royal commission, to celebrate the birth of the king's son, Charles II.

Described as having "outstanding importance" for Britain's "national heritage", the painting had been on long-term loan to the gallery from a private collection for almost 20 years. 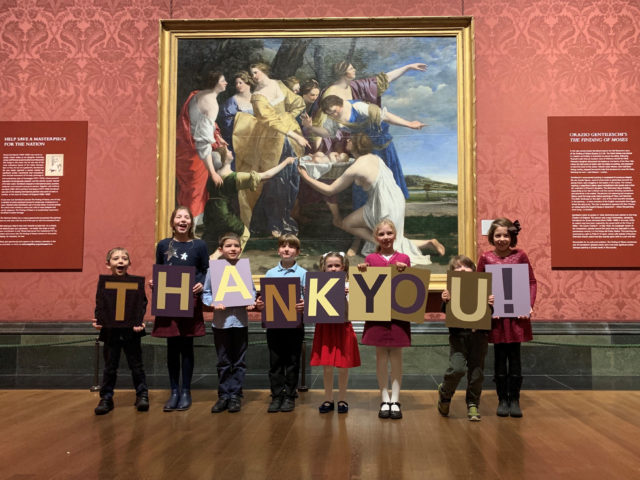 Vast in scale - measuring 8ft 5in (257cm) by 9ft 10.5in (301cm) - it is displayed in the Italian Baroque gallery alongside masterpieces by artists such as Caravaggio.
The National Gallery first attempted to buy the painting in 1995.

It later launched a fresh bid and an appeal in November, asking the public to help raise the last £2 million it needed.

That final figure has now been reached with contributions from individuals, trusts, and the public.

The gallery's director, Gabriele Finaldi, said: "From the small gifts of a few pounds to those of many thousands, I am really thrilled that so many people have contributed in the last lap of the campaign to enable us to acquire the painting for the nation.

"Big donors and little ones have ensured that The Finding Of Moses can be enjoyed by all. Our thanks to all of them."

Art Fund director Stephen Deuchar said: "Orazio Gentileschi's The Finding Of Moses is a masterpiece of visual brilliance and epic storytelling, whose acquisition Art Fund's trustees supported with £1 million - one of only a handful of grants of this magnitude we have ever given.

"Our enthusiasm is clearly shared by everyone who has donated to the gallery's public appeal."

The full cost of the painting is £22 million but the net cost to the gallery is £19,471,340, taking into account the tax remission available under private treaty sale rules.

Gentileschi worked briefly in Genoa and Paris before moving in 1626 to London, where he was employed as court painter for Charles I.

He was one of the first practitioners of Caravaggism in England and remained in the country for the rest of his life.

Culture Secretary Nicky Morgan said: "This beautiful painting, which has been an important focal point of the National Gallery's collection for so long, will now remain on permanent display for current and future generations to study, admire and be inspired by.

"I congratulate the National Gallery and everyone who has helped make this happen."
(PA)

Are you getting enough fibre? Here’s why it’s so important