A screen grab from the video showing the Royal Navy RHIB during the incursion.

The Royal Navy was accused this week of “harassing” a Spanish customs vessel that was offering assistance to a Spanish-flag yacht that ran into trouble in British waters off Europa Point last week.

Officials here dismiss claims that a Royal Navy Rigid-Hulled Inflatable Boat (RHIB) had navigated in a dangerous manner during the incident on February 2.

The Chronicle reported at the time that the Gibraltar Squadron intervened when a crewman from the Servicio de Vigilancia Aduanera (SVA) vessel Fenix tried to board the yacht.

Although this was compliant boarding of a vessel in distress, the move was regarded by the UK Government as the Spanish crew conducting unlawful executive action in British waters.

The SVA left the area after it was warned by the Royal Navy’s Gibraltar Squadron and was escorted out of British waters. The UK said it would file a diplomatic protest.

Authorisation was later given for a Spanish maritime rescue vessel to tow the yacht to Spain.

But days after the event, Spanish media began to run articles saying the Royal Navy RHIB had rammed the Spanish Customs vessel.

Video emerged yesterday filmed by a Spanish Customs agency showing how the navy RHIB approached the patrol boat and the yacht, coming up against the SVA vessel as it blocked its approach to the yacht. 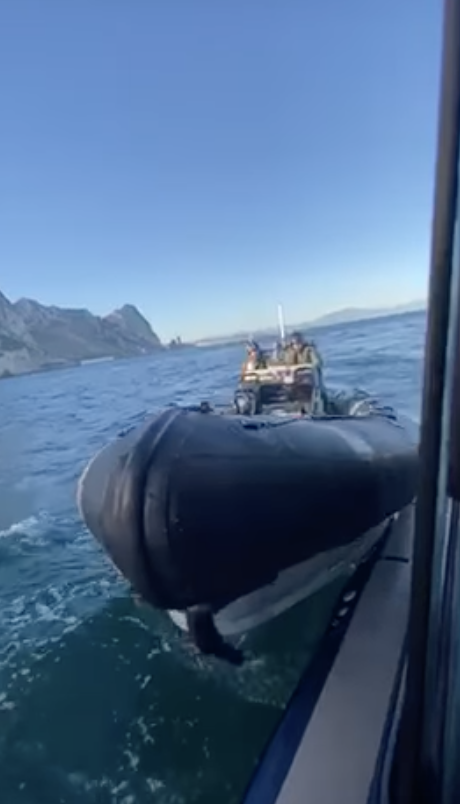 Spanish media, law enforcement representative bodies and politicians said the manoeuvres were dangerous, something officials on this side of the border said was not the case.

Either way, the Spanish Government will likely make a diplomatic protest about the incident.

Spanish media also highlighted two other incidents that same day, including one in which the Royal Navy and other Gibraltar agencies prevented a Spanish survey vessel from conducting operations in British waters in the bay.

They flagged too the fact that HMS Pursuer had conducted live firing exercises in international waters east of the Rock, complaining that the Royal Navy had not given prior warning.

This was dismissed by The Convent on Wednesday, however.

A spokesman said: “The vessel observed all necessary safety protocols.”

He added that at no point during any of the three incidents did Royal Navy or Gibraltarian vessels enter Spanish territorial waters.

There was another incident on February 2, although this has not made the Spanish news.

That night, an SVA vessel with flashing blue lights came close to the shore at night near Emerson’s Place and Waterport Terraces, alarming many residents in the area.