Interpretation panels have been placed within our Old Town in order to provide information on the Rock’s Medieval History, namely Gibraltar’s Islamic and Spanish Periods.

Organised by the Ministry for Heritage the three new interpretation panel have been placed at Tarik Passage immediately adjacent to the entrance to the Old Prison. This provides information on the Almond Tower. This tower is part of the medieval defensive complex of the Moorish Castle located just outside the outer keep of the castle.

The tower dates back to our Islamic Nasrid period, although partially reconstructed on at least three occasions. It was last restored in 2019 by the Gibraltar National Museum. 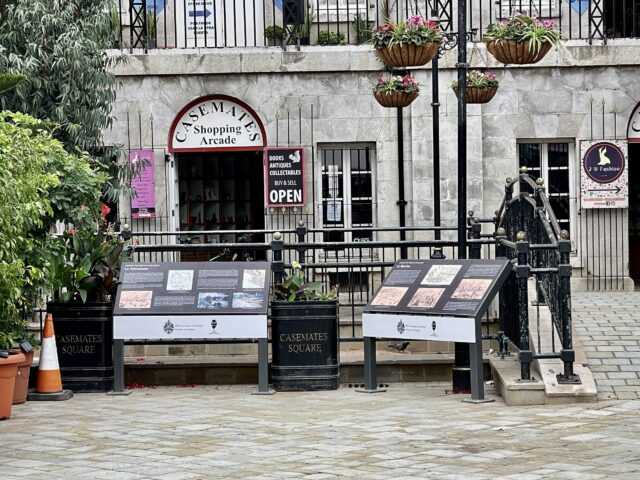 Two interpretation panels have also been placed at Casemates Square, showcasing one of the most ancient parts of the City of Gibraltar.

The first panel features information on the ‘Atarazana’, a large galley house where ships were repaired at a port dating back to 1160, in what is now Casemates Square.

Successive occupations by the Spanish and British saw major changes in the built fabric of the area. The exposed section of the medieval building was excavated by the Gibraltar National Museum in 1998.

The second panel features what the ‘Atarazana’ became during the Spanish Period, after the conquest of Gibraltar in 1462; the galley house was abandoned with the advent of new shipping technology.

“There has been a great deal of emphasis on the cultural and military heritage of the past three hundred years, but our medieval and social heritage are as important,” said the Minister for Heritage Dr John Cortes.

“These panels have been placed at prime locations such as Casemates Square and the Upper Town allowing Gibraltarians and tourists to inform themselves about some aspects of our medieval past.”

“Highlighting our cultural heritage fosters understanding of past histories and is not limited to archaeological discoveries. This is yet another example of the Government’s continued effort to promote the whole of our history and heritage and to make it accessible.”