A nine-year-old has successfully run the distance from Big Ben to the Eiffel Tower at home to raise money for the NHS – and says he might cycle the return trip next week.

Josh Hall from Blean, Kent, also crossed the Channel on a rowing machine as part of his 341km (212-mile) virtual journey from London to Paris – which culminated with him jogging up and down his stairs to climb atop the French capital’s famous tower. 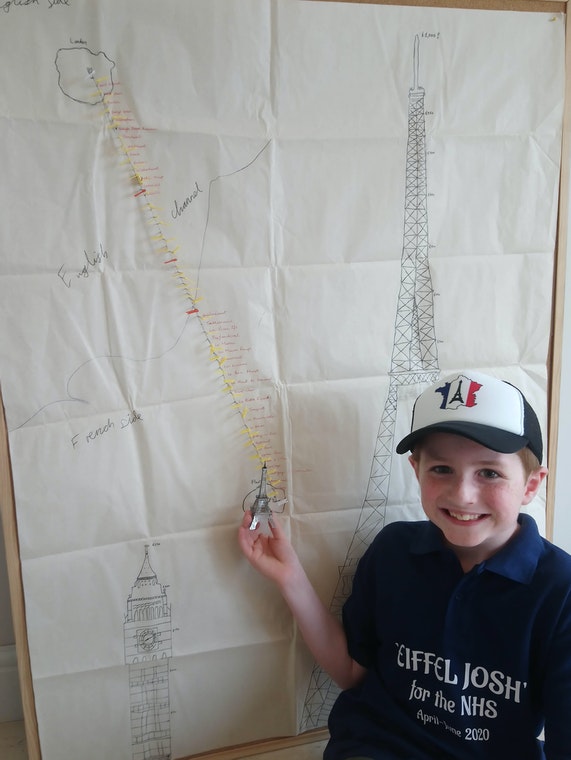 He started the challenge on April 16, running 6km (3.7 miles) per day over three sessions in his garden and in local green areas, completing the trip 75 days later on June 30.

“It was difficult at the beginning… I was like I really want to get there but I don’t think I can… now I’m just shocked,” Josh told the PA news agency.

“I thought I was going to stop somewhere in the Channel.

“I’m thinking of cycling back from Monday next week.”

After being inspired by Captain Sir Tom Moore’s fundraising efforts, Josh said he had initially wanted to run to Cairo for his challenge but his mum, Rebecca Hall, asked him to choose a more “realistic” distance.

“I had thought Paris was too close,” he said.

So far Josh has raised over £1,000 for NHS Charities Together on hisJustGiving page.

“The NHS is struggling because of coronavirus patients – facilities cost money so… I thought I could try and raise money,” he said.

Josh was cheered via Zoom call by his friends as he finished his final 20 flights of stairs at his home.

When one friend asked him what the view like from the top of the Eiffel Tower, Josh replied: “It’s kind of lower than I expected, we’re just at the top of my house.

“But once lockdown is over my mum and dad are going to take me to the top of the Eiffel Tower in real life.”

Asked how he would celebrate finishing the distance, Josh said he and his family would be eating pizza and apple pie and watching a film.