‘Outside the comfort zone’ for charity

Tyre flipping, devil lifts, burpees and even skipping formed part of an intensive personal training session that six members of the RGP endured early Friday morning, all in aid of feeding families in need in Spain.

Putting the officers through the course, shouting intense words of encouragement when necessary, was JoJo France, a personal trainer based mainly up the coast in Spain. 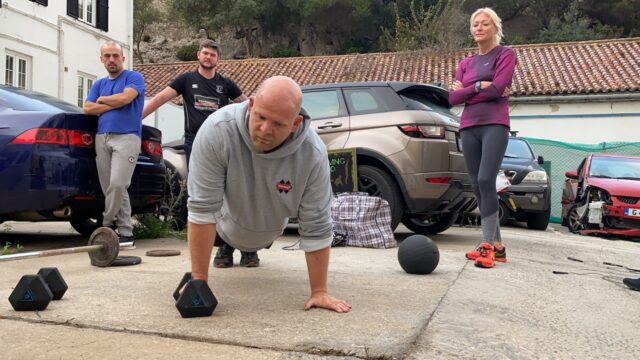 She explained that at the moment a lot of the families are finding themselves in hardship beyond their control.

“Maybe they lose their jobs and they get a Government handout from the Spanish Government, but it does not last. And once that handout is finished there is nothing else,” she said.

“There are no jobs, no more money, no unemployment benefit long term.”

This is where the Saint George charity, based in Sabinillas, steps in.

She recalled one family where both the parents had worked in a hotel, the father was a manager and the mother a receptionist. However, when Covid-19 hit they lost their jobs and they found themselves without money and with two young children who needed food and other essentials.

“They had money up until January this year and now they come to us for all their food. They come to us at the food bank where we give them their evening meal every day,” she said.

This warm meal is prepared by volunteers and all the food has been donated.

While this soup kitchen had been in action for a number of years before Covid-19 and had been supplying families with hot meals daily it became clear that some children were not eating any other meal that day.

“Some children were going to school with no breakfast in their bellies. So this was then the start of the ‘Feed A Child’ campaign. But, because of Covid there is no longer just vulnerable children but adults as well,” she said.

“It used to be just food but now we do everything. So they can come to us for a care package, toiletries, nappies, sanitary products the whole works.”

All the families are on the social services list, so the organisers are sure that they are families in legitimate dire need and while they would not turn away helping someone living in the country illegally, all the people they do help are legally resident in Spain.

Social services officials in Malaga gives the Saint George charity a list on a daily basis and will detail how many are in a family, what are the age groups and genders of the families members and the charity caters for that.

“We may only cater for them for one month but it very well may be that the Mum is in further education and she is going to be a nurse then we will continue to pay for her costs to continue to go to college,” said JoJo.

“Because that will get her and her family off social services.”

Two other faces behind the campaign locally are Katherine Grant from Image Graphics and David Deardon from Specialist Medical Centre. This is not their first time taking part.

“Last year, Gibraltar raised over £4,500. Shows the natural giving nature of the Gibraltarian people to those that are in need – whether right within our community or on the doorstep of it,” said Ms Grant, who together with Mr Deardon did 100 burpees a day for the 12 days of Xmas in festive attire. 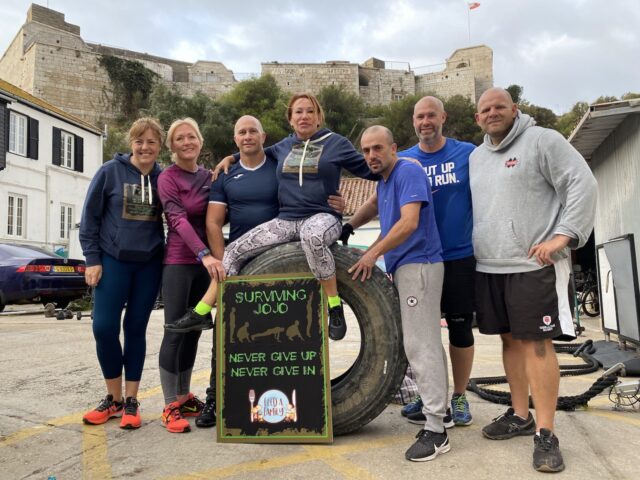 The charity is aiming to raise well over the 12,000 euros it has on other occasions across seven events taking place in Gibraltar and Spain, including the training of the police officers.

Four members of the police in Spain were also due to train with their counterparts on Friday morning, but given the ongoing demonstrations across the border their chiefs needed the officers on duty.

Other fundraising events including, selling space on JoJo’s t-shirt that she will be wearing when she is on GBC’s The Hub next week, a pub quiz in the Hairy Lemon in Sotogrande, some non-runners taking part in the Malaga half marathon in December and a Boxing Day swim.

In addition, to these is the burpee challenge where teams of four will do 1,200m of burpees to broad jumps around a track in Pueblo Nuevo. A challenge JoJo herself has only completed once in her life such is its intensity.

Via the Feed A Family Campaign it costs 250 euros to feed a family of four in Spain for one month. To support the cause go to https://www.gofundme.com/f/StGeorgeXmas2021