The Gibraltar Parliament has unanimously approved an emergency budget to prepare Gibraltar to fight the Covid-19 virus in the coming months, as Chief Minister Fabian Picardo said he did not discard forming a cross-party government of unity and warned that Gibraltar could face a total lockdown in coming days.

The legislation passed by MPs extends the current financial year to the end of September, paves the way for the government to borrow up to £500m, and provides emergency 90-day powers for the Chief Minister to legislate and make swift spending decisions with the support of the Leader of the Opposition, but without having to go to Parliament.

Mr Picardo also outlined plans for a new raft of measures aimed at helping businesses to remain solvent and, in doing so, continue to keep paying their staff.

In the public sector, government departments will receive 50% of their current budgets, enabling them to pay salaries and operate as normal over the next six months. No new public projects will be commenced in the coming months.

The Gibraltar Health Authority, however, “…will have whatever it needs to face this crisis,” Mr Picardo said.

In a sombre rallying call that placed the community on a war footing against coronavirus, Mr Picardo said the world had changed and that nothing would be the same again.

And as he praised the community for coming together to fight Covid-19 and protect its most vulnerable members, he said Gibraltar must brace for a new reality in the coming weeks and months.

“The age of entitlement is long gone now,” he said.

“The age of responsibility is all we have left.”

And he later added: “Things will never be the same.”

“Normality will return but it must be different.”

Mr Picardo said the focus of efforts in recent weeks had been on bolstering Gibraltar’s public health services and putting in measures and restrictions to shield the elderly and the vulnerable from the worst of the virus.

The GHA now has 96 available beds and is “…as ready as possible for what is to come,” he told MPs.

But in parallel, he said too that the government was working to alleviate the economic impact across many sectors of the economy as a result of restrictions put in place on the advice of public health officials.

Society is no longer functioning normally, he said, and businesses already stretched to the limit “…will be pushed to further extremes in the weeks to come.”

Mr Picardo said the financial impact of the crisis was difficult to foresee because it was a dynamic and fast-changing situation.

But he said the government already had £150m of “readily available cash” and was able to borrow up to £500m without breaching established debt ratio limits of 40% of GDP, factoring in existing gross debt.

The government has established a Covid Economic Liaison Advisory Council [CELAC] made up of business organisations and unions which will meet tomorrow to begin analysing the economic impact of the crisis and prepare measures to help businesses.

But the underlying focus of those initiatives is workers, including a warning to any business “profiteering” from the situation.

“No worker, no person, no family will go without,” the Chief Minister said.

Speaking just days after he invited the Leader of the Opposition, Keith Azopardi, to attend a meeting of his Cabinet, Mr Picardo said he did not discard forming a government of national unity if necessary and inviting Mr Azopardi into his government on agreed terms.

And he was clear that the situation facing Gibraltar and the world would worsen before it gets better.

“A total lockdown may come in days and our community must be ready,” he said, although he cautioned that such a decision would only be taken on the advice of public health professionals. 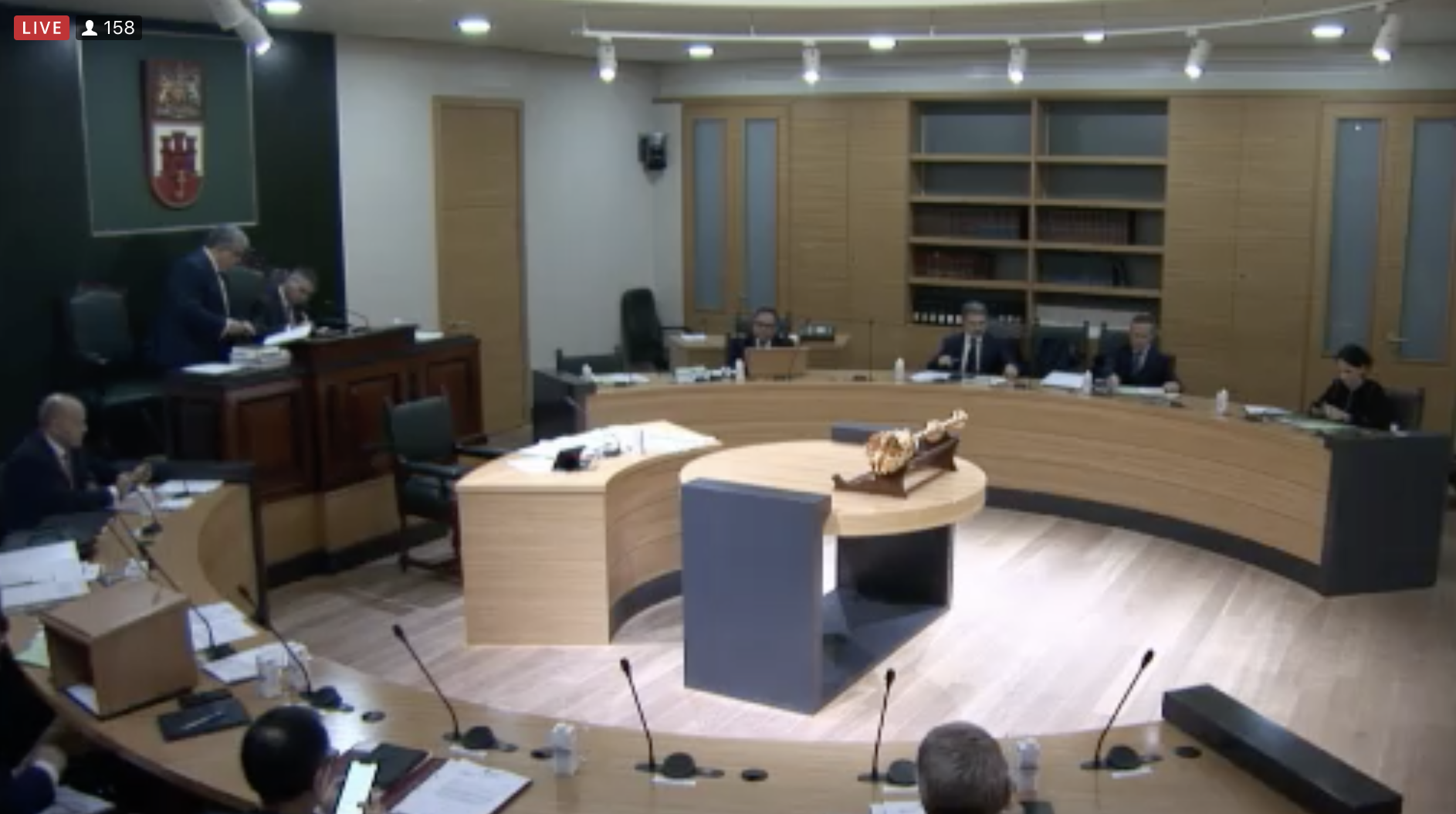 The unprecedented parliamentary session was attended by just a few MPs on either side of the chamber as Gibraltar’s parliamentarians led by example and ensured social distancing, particularly for older and vulnerable members including Sir Joe Bossano, who is 80, and Daniel Feetham, who lost his spleen in a knife attack while he was Justice Minister.

The session was presided over by government minister Gilbert Licudi, who stepped in for Speaker Melvyn Farrell who is over 70.

Despite their well-known positions on public finances and debt, the Gibraltar Government and the Opposition agreed to set aside their respective differences - for now, at least - in order to focus on the crisis facing this community.

GSD MP Roy Clinton, who has been tough on the government’s spending over recent years, acknowledged that this was the right decision.

“I’m satisfied with the numbers that have been put together [in the Bill] and that they do reflect exactly what the Chief Minister has said,” he told Parliament.

“We are not in normal times. This is not business as usual.”

“We have to do what we can with the resources that we have.” 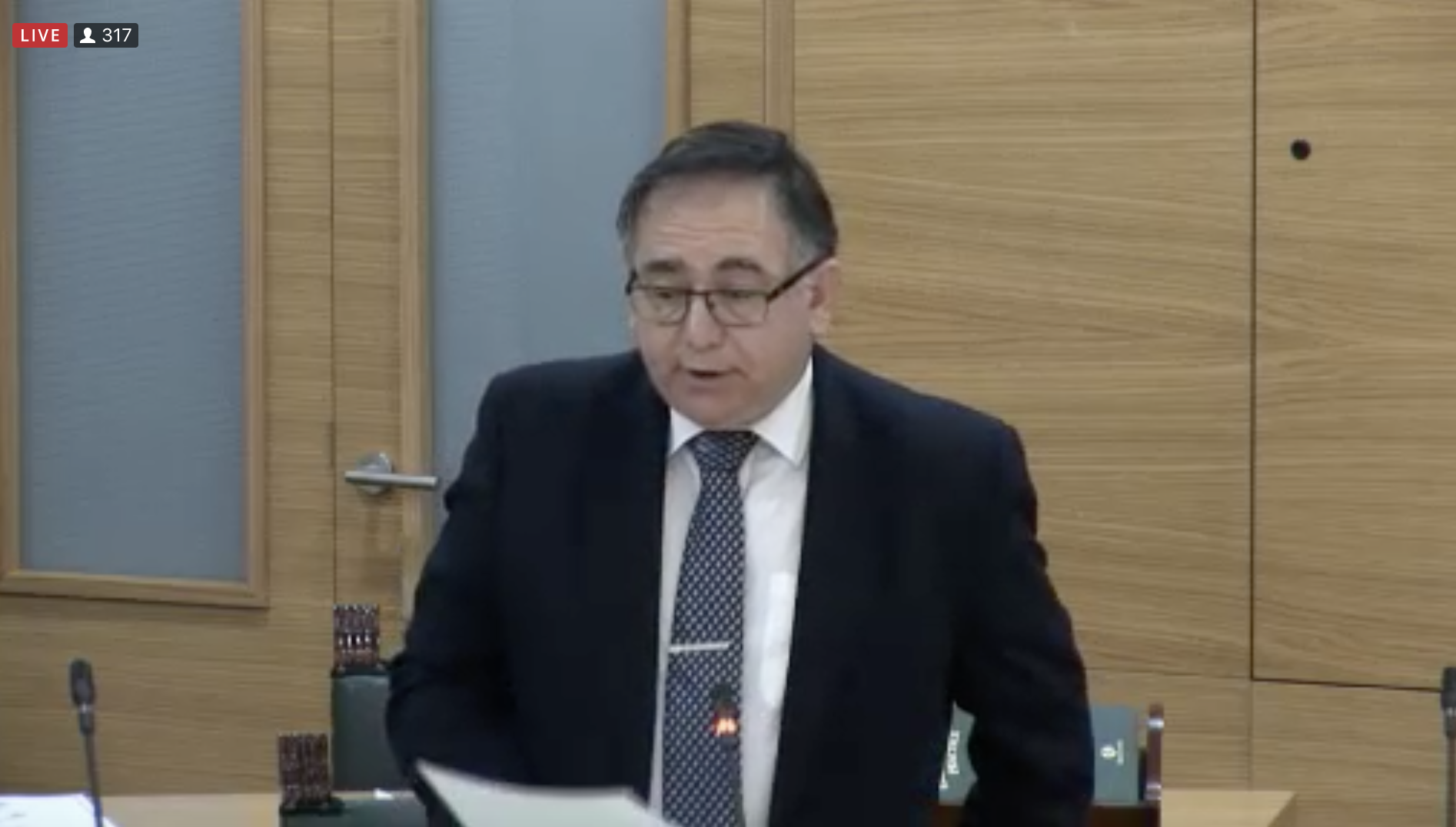 Mr Clinton also acknowledged the emergency powers granted to the Chief Minister in the legislation approved by Parliament, which allow Mr Picardo to legislate and make public spending decisions without first going to Parliament, albeit in consultation with the Leader of the Opposition.

The time-limited powers allow the Chief Minister to amend any primary or secondary legislation, as may be necessary to put in place measures to assist businesses, registered employers and employees and the self-employed.

He stressed though that any monies used in line with those powers must be targeted “in the correct way”.

Mr Clinton said that economic measures were vital alongside the public health drive undertaken by the government, adding that “businesses can’t wait”.

The virus, he said, had delivered “a sudden demand shock” that would hit all sectors of the economy, describing it in stark terms as a “simultaneous nuclear wipeout” that required immediate palliative measures and minimum red tape.

“We need to look at what we do and how we do it, but from what I have heard today, we are doing just that,” he said. 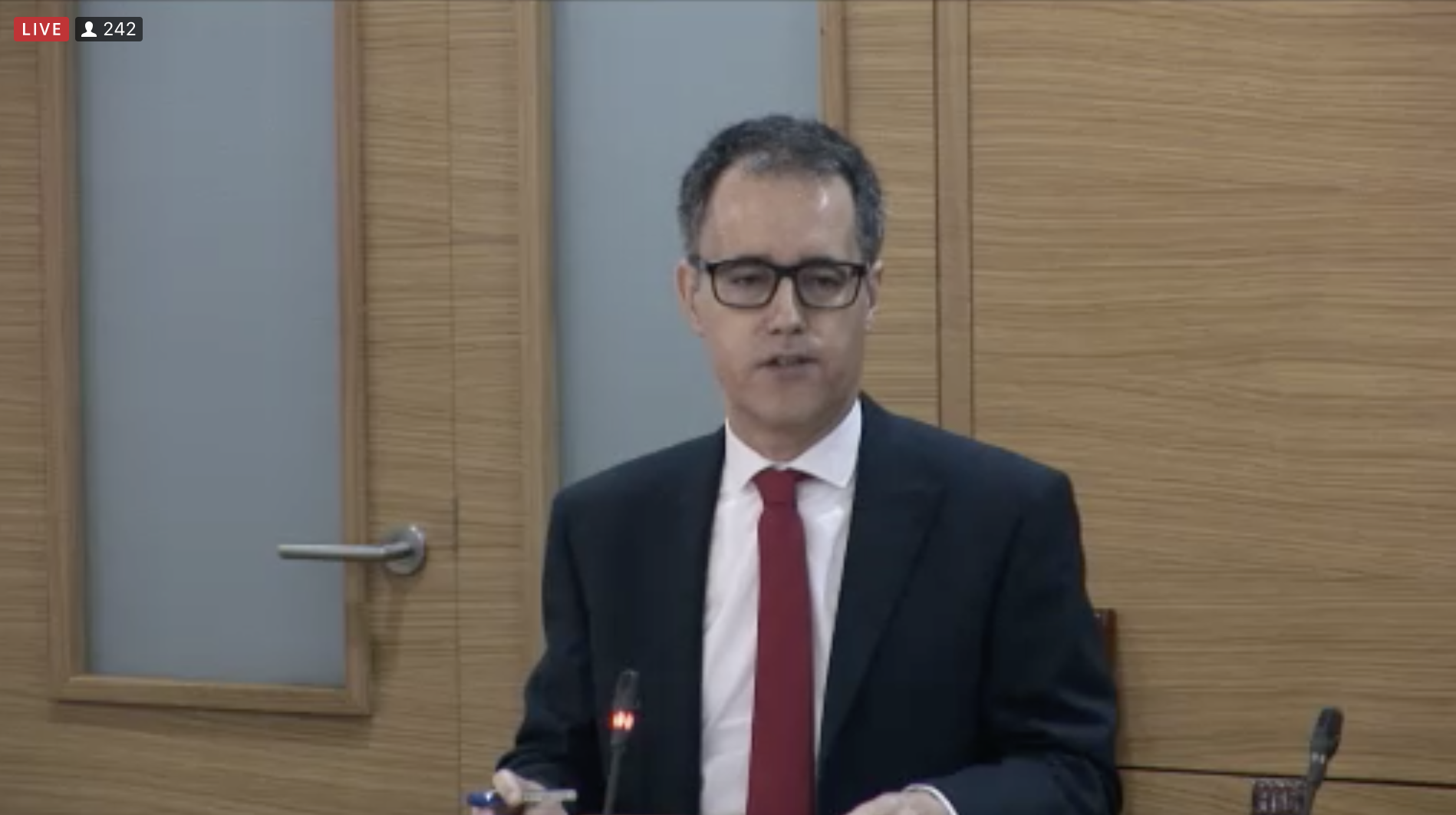 But he echoed the Chief Minister and said there was more hardship to come.

And he urged Gibraltarians to draw on this community’s “indomitable spirit” that was rooted in past experience including the evacuation and border closure, insisting that it was vital everybody follow the advice of public health officials. 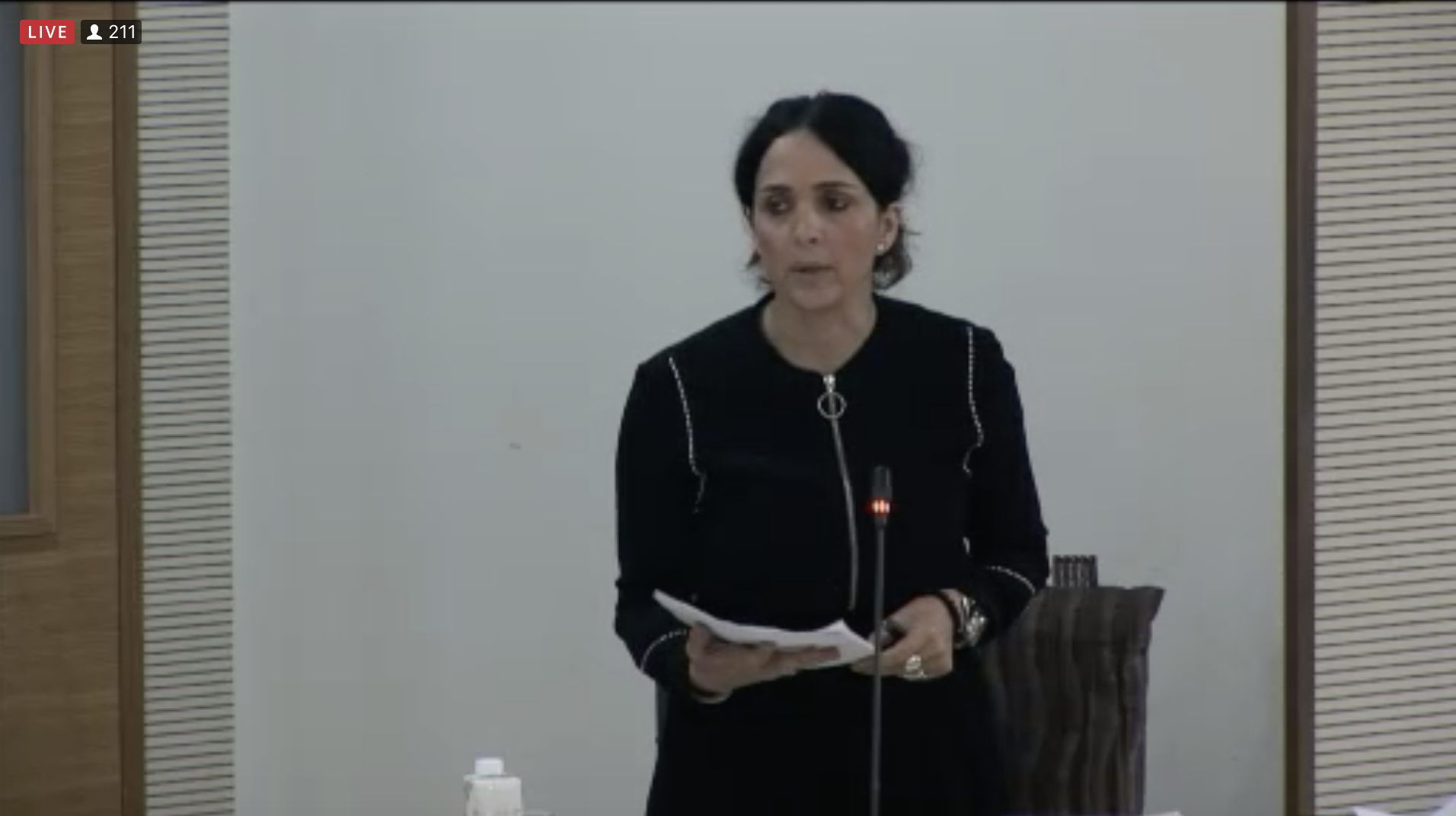 Together Gibraltar Leader Marlene Hassan Nahon renewed her party’s call for tougher restrictions to flatten the curve of infection of the virus in Gibraltar, adding too that businesses needed “robust support”.

“Now is not the time for half measures,” she said.

Government minister Vijay Daryanani stepped in for Sir Joe Bossano and read a speech that reflected on the wider, global economic impact of the virus.

Sir Joe, who drew on past experience including the closure of the dockyard and the border, said the health of people had to come first and that Gibraltar would have to adjust its expectations to guarantee the necessary resource to deal with the health crisis in the first instance.

“We shall have to cut our suit to fit our cloth,” he said.

Albert Isola, the Minister for Finance and Gaming, said his team was already working on the Gibraltar Government’s strategy for economic recovery after the crisis is over.

“We need to be ready from day one,” he said.

“We are doing what we can to prepare for the other side.”

“Our economy is going to need a big kick to get going again.”

GSD MP Elliott Phillips raised a vital issue that all MPs agreed needed to be prioritised in the coming months, and that is the impact of the crisis on mental health.

Mr Phillips said the community was faced with “information overload” and that much of the new was stark in nature.

“I’m deeply concerned about the mental health impact of this information overload,” he said.

For his part, Housing Minister Steven Linares outlined the work that his team at the Ministry for Housing was doing to ensure that older people living outside the pensioners’ accommodation were properly cared for in the coming days. 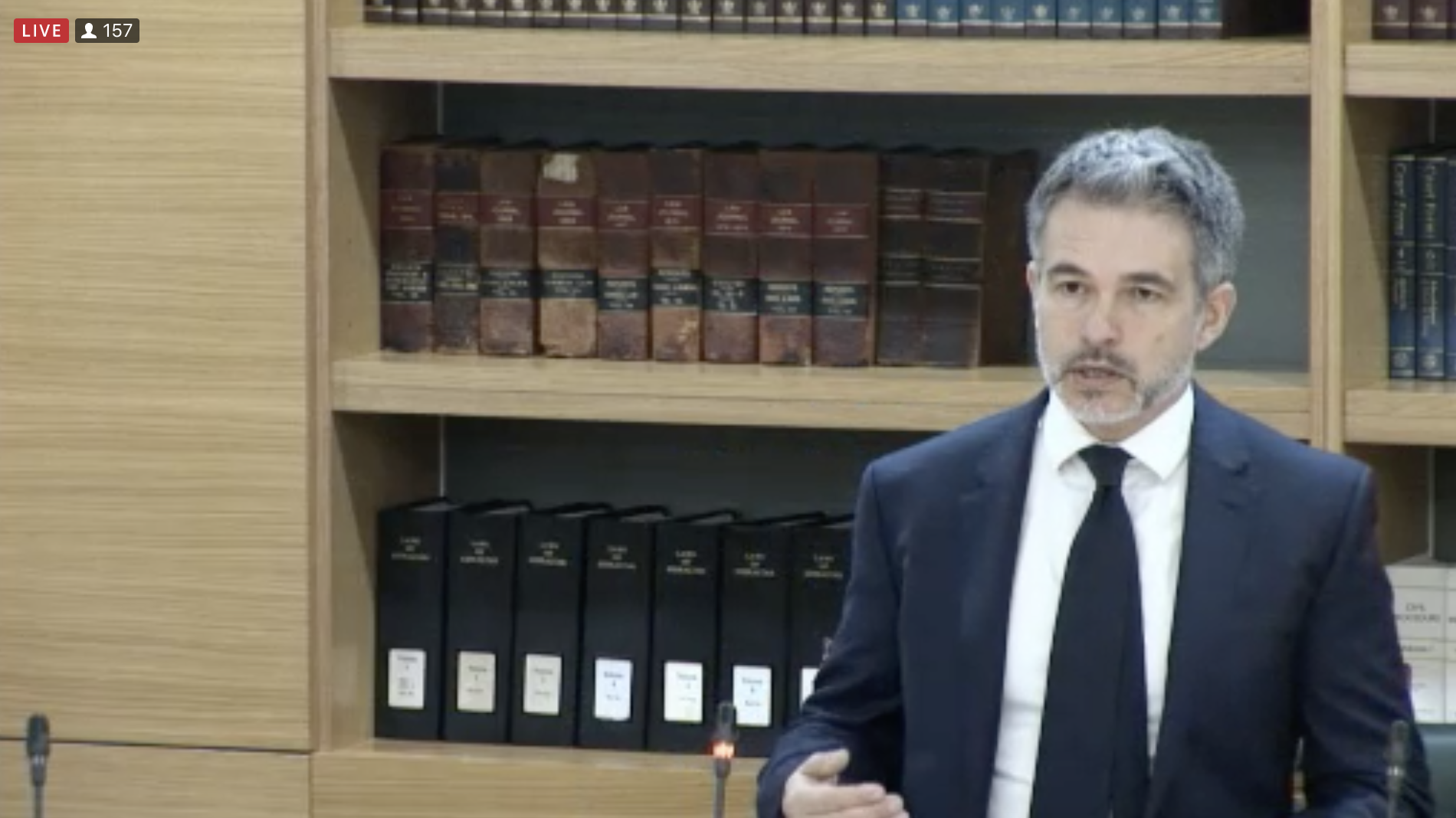 Keith Azopardi, the Leader of the Opposition, said the current situation was a reminder of mankind’s fragility, describing these as “unprecedented times requiring extraordinary actions”.

He said the GSD was determined to work with the government to deal with the crisis “decisively”, adding that this was a “seminal challenge” for Gibraltar collectively and for Gibraltarians as individuals.

“It will be the mark of our strength and our spirit to overcome this crisis,” he said.

Mr Azopardi said the GSD supported everything that had been done to date, even if it had different views on emphasis on some issues, for example on wider testing in the community.

And he underscored the view that all sectors of the economy would be impacted by this crisis and the measures put in place to mitigate it.

“All sectors are affected, that is already happening,” he said.

“Very quickly, we have seen a massive slowdown in the economy.”

He said Gibraltar must take measures over the coming months not just to help companies to protect existing jobs, but also to seek ways of stimulating activity.

“The funding of paralysis by the tax payer will not get this economy going as we emerge,” he said.