Polls close with turnout of just 52.75% in abortion referendum

Votes in Gibraltar’s abortion referendum are being counted after polling stations closed at 10pm with a lacklustre turnout of just 52.75%.

Despite steady voting through the day, particularly early in the morning, just 12,313 of the 23,343-eligible voters cast their ballots at the end of a campaign that at times was tense and exposed rare but deep divisions in this close-knit community.

Today’s referendum will see the electorate decide whether or not to enact legislation amending the Crimes Act to allow abortions to happen in Gibraltar under certain defined circumstances.

After years of campaigning, with the referendum postponed last year due to the pandemic, the decision will finally be reached later tonight when civil servants count the ballots at the University of Gibraltar.

Throughout Thursday, polling stations around the Rock witnessed a flow of voters as people exercised their right to decide whether Gibraltar’s law on abortion should be changed.

In the run-up to the vote, campaigning had often been intense as the two sides in the debate offered starkly opposed positions on the proposed law.

As the community engaged in the discussion, some of the exchanges, particularly on social media, were often heated and sometimes unpleasant.

But on Thursday, the vote itself transpired without incident and in a spirit of mutual respect.

With 23,343 people registered to vote including 329 postal votes, the day marked an end to a campaign that had been extended by over a year due to Covid-19.

At Central Hall polling station, one campaigner stated that she believed that Covid made the campaigning this year “less acrimonious” with people having more empathy and sympathy for each other despite their divergent views.

Outside polling stations, each side in the referendum - ‘Gibraltar for Yes’ and ‘Vote No, Save Babies’ stood – maintained a presence next to banners setting out their campaign slogans.

Some stood on the opposite sides of entrance to the polling stations, while others sat close side by side. 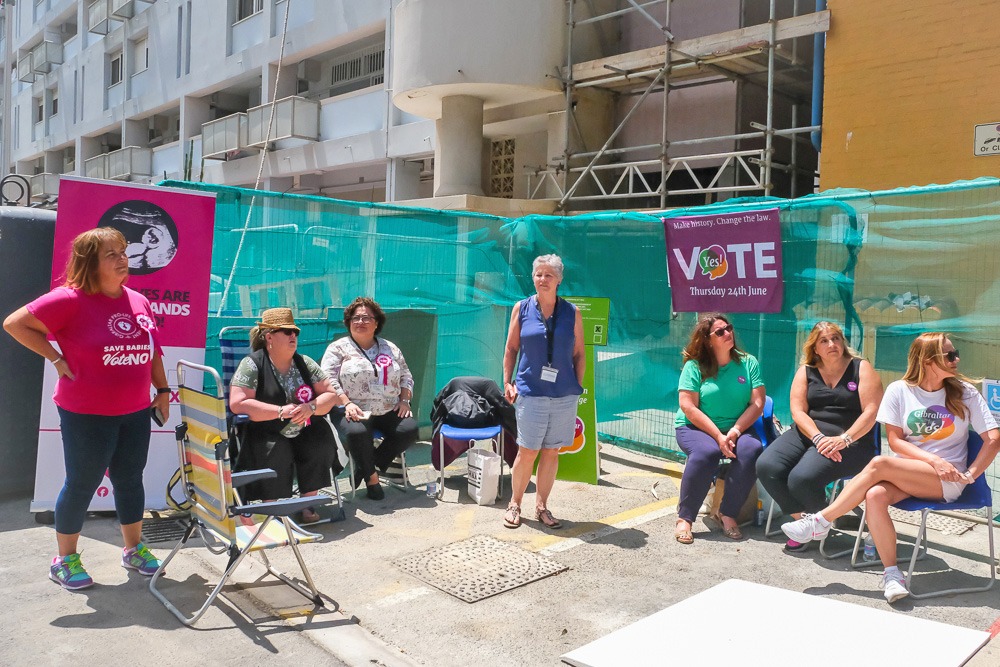 There was an obvious atmosphere of respect with both sides merely aiming to give voters a reminder of what their vote would mean.

Embracing his first vote was Noel, whose ambition is to study law and enter the world of politics.

“It felt very weird but very empowering I suppose because I can finally give my own opinion, my own decision and I partake in this democracy,” he said.

“I was quite excited walking here.”

Now aged 18, two years ago Noel made a point in an interview that the abortion referendum should include 16 year olds.

“I was pushing for this a few years ago… I think it has been very important that 16 and 17 year olds have been able to vote,” he said.

Ultimately though, just 429 eligible voters in that age range – or 3.5% of the total - cast their ballots on Thursday. That was a good share, however, of the 534 people in that age range who had registered to vote.

During the day the Governor, Sir David Steel, visited a number of polling stations to see the process and reflected on the process.

“This is a historic moment for Gibraltar,” he told the Chronicle.

“Referenda are very rare in Gibraltar. Gibraltar has an elected parliamentary process and democratic process and you only hold a referendum on those issues that have the most significance to society and this is one of them.”

“And I am not surprised that there will be a divide in Gibraltar between the Yes vote and the No vote but this is democracy in action and to see this polling station is just an example of the democratic process working well.”

He acknowledged that it was an emotional subject for the people of Gibraltar but felt that people will accept the vote either way and will move forward.

He referred to the 2016 Brexit referendum in which 96% of Gibraltar voted in favour to stay in the EU. But when that did not happen, people got up the next day and accepted the vote.

Returning Officer Paul Martinez reported that there had been no issues with the new voter ID systems.

“They have been a great help and it has been working well,” he said.

“The system is a good aid to the process.” 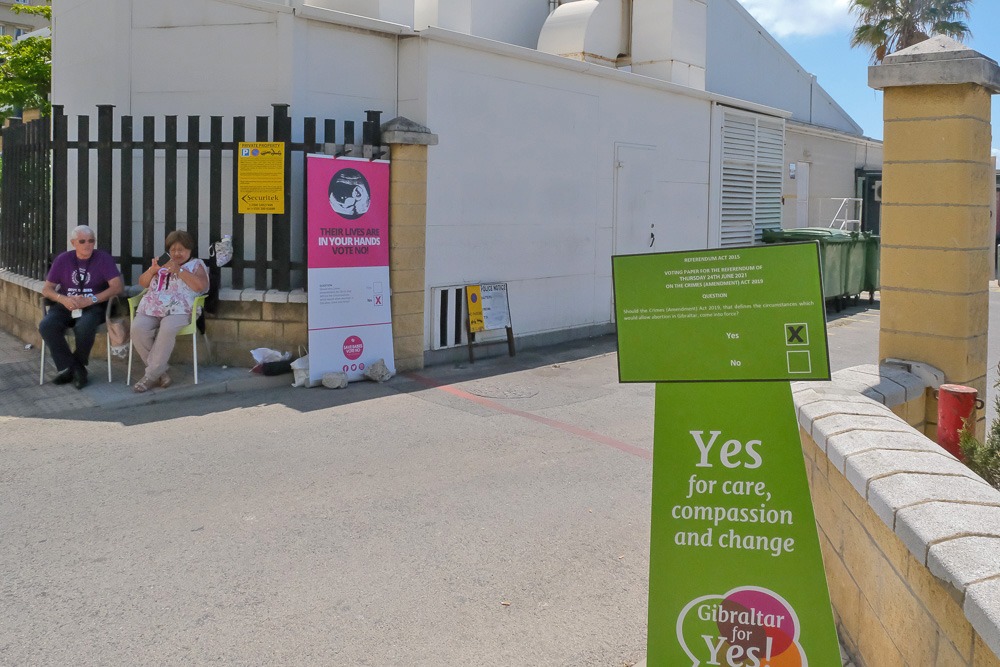 Casting his vote on Thursday morning, Chief Minister Fabian Picardo said the referendum, no matter the outcome, would be historic.

“It is a pleasure to see Gibraltar going out to the polls again as usual in peace having heard all of the arguments from all of the sides that had something to say in this important seminal referendum on women’s reproductive rights,” Mr Picardo said.

“Today I expect will be a day just like every time Gibraltar goes to the polls where people will express their views peacefully and by marking that option on the ballot paper that they believe is the best for the future of our community.”

“I very much look forward to this day being a day that goes down in history whatever the result tonight and that the people of Gibraltar will have spoken with the result that is announced tonight by the referendum returning officer.”

“Thank you very much indeed for forming part of this day of democracy in Gibraltar.”

Mr Picardo said he would not speculate the outcome and the next steps after the result.

“At the moment Gibraltar is going to the polls,” he said.

“Forgive me for not speculating what the result will be I believe it is important to allow the democratic process to be seen out completely and the Government will act in keeping with the views of the people of Gibraltar as expressed.”

Leader of the Opposition, Keith Azopardi, who has campaign for ‘No’ said the referendum has been "emotional and divisive".

“I think the message is it has been a very important issue, we have never had this kind of debate in Gibraltar it’s been an emotional and divisive campaign in many respects but I think the important moment now has come for people to reflect and make a decision and I encourage everyone to do so," Mr Azopardi said.

Together Gibraltar leader, Marlene Hassan Nahon, remained firm in her position that the legislation should have passed without going to referendum, adding that it has caused rifts within the community.

This is the fifth referendum being held in Gibraltar’s “short political history” which Ms Hassan Nahon said is going to “cause a lot of division” because the others had a resounding one-way vote each time.

“We didn’t want this to happen, we thought that parliamentarians and the Government should have whipped a majority in order to force this issue of human rights especially when they are saying it is going to be forced on us anyway, so it has been a bit of an exercise of cynicism to get that legislation passed without needing a clause for a referendum,” she said.

In the event of a ‘No’ vote winning, Ms Hassan Nahon, a staunch pro-choice supporter, said her party will continue to lobby for legislation, based on what is being seen in Northern Ireland and elsewhere.

Deputy Chief Minister Dr Joseph Garcia said the referendum had seen intense campaigning and once the result is announced he called for reconciliation.

“It is important that I think that once the result is known is that everybody comes back together as a community family atmosphere that Gibraltar has always had,” he said.

“I have always felt very strongly that the women of Gibraltar are entitled to have a safe abortion in Gibraltar in controlled and defined circumstances rather than be forced to go to Spain or to United Kingdom or elsewhere.”

When asked if he was concerned that Gibraltar would be divided on Friday morning.

“I think this is an issue where people hold strong views on both sides. So I think obviously coming together may take time but I am sure that will happen.”

Campaigner for the Yes vote and the Chief Minister’s wife, Justine Picardo added that Gibraltar’s final choice will be the right outcome.

“I think we are feeling quite positive,” she said.

“I obviously have been through many referendums, well at least one and the elections as well, and therefore I enjoy this democratic process where people are coming out, where they are showing what they feel and I think that whatever Gibraltar choses will be the right outcome for us and I hope it will be a positive one.”

She added the Yes campaign has managed a very positive campaign.

“That positive message and [we] have tried to make people aware and understand that yes and voting choice is voting for women and trusting women and not denigrating us and feeling that we are not able to make our own choices and not able to be trusted in these situations,” she said.

Karenza Morillo, spokesperson for ‘Save Babies, Vote No’, described the run up to referendum day as a “positive campaign” with a good level of respect, other than what was seen on social media.

“I think we have had a good campaign and we feel there has been a change of tide, in the last few weeks especially, but it is difficult to tell which way it is going to go,” Ms Morillo said.

Putting a referendum on abortion to the public has been “worse than Brexit”, she said, because it is a very emotive subject.

“There are people who have been through abortions themselves, and other people have had miscarriages or other difficulties, and the whole issue of maternity and paternity and child makes it very difficult for those involved,” she added.

“I think that it has been worse than any other referendum or even election because the topic itself is a very emotive one.”

“It is difficult to campaign for the rights of the woman and the baby as well when babies have gone through it, making it difficult not to sound judgemental or make people feel like you are judging them.”