Poor at greatest risk of injury in medieval Cambridge, study of skeletons shows

Photo issued by the University of Cambridge showing X-rays of butterfly fractures to both femora of an adult male buried in an Augustinian friary. A study of skeletons from three graveyards has indicated that poor people were at greatest risk of injury in medieval Cambridge.

A study of skeletons from three graveyards has indicated that poor people were at greatest risk of injury in medieval Cambridge.

Researchers from Cambridge University used X-ray analysis to establish that skeletal trauma was highest in a parish graveyard for ordinary working people, called All Saints by the Castle.

The team found that 44% of working people buried there had bone fractures, compared with 32% of the skeletons at an Augustinian friary that buried wealthy donors alongside clergy. 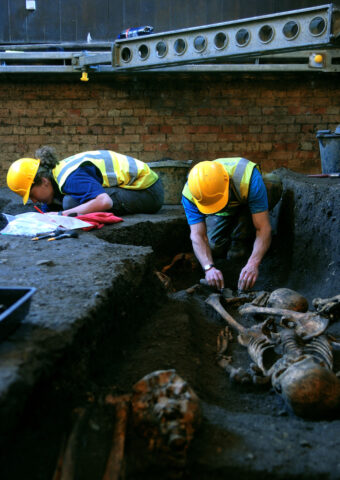 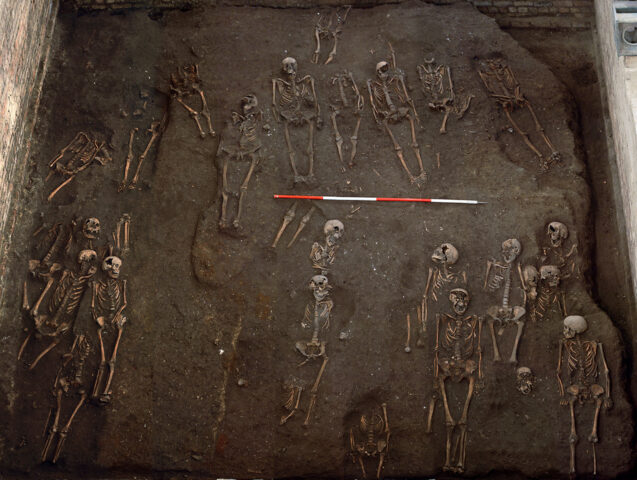 There were fewer injuries to those buried at the charitable Hospital of St John the Evangelist, where the infirm and destitute were interred, with 27% of the skeletons there fractured.

Study lead author Dr Jenna Dittmar, of Cambridge’s department of archaeology, said: “By comparing the skeletal trauma of remains buried in various locations within a town like Cambridge, we can gauge the hazards of daily life experienced by different spheres of medieval society.

“We can see that ordinary working folk had a higher risk of injury compared to the friars and their benefactors or the more sheltered hospital inmates.

“In town, people worked in trades and crafts such as stonemasonry and blacksmithing, or as general labourers.

“Outside town, many spent dawn to dusk doing bone-crushing work in the fields or tending livestock.”

All of the burial sites were within the historic city centre and the 314 skeletons, all at least 25% complete, dated from the 10th to the 14th century.

Cambridge was primarily a provincial town of artisans, merchants and farmhands at this time, with scholars arriving in 1209.

Participation in adult work often began in earnest at the age of 12, so those estimated to have been younger were discounted from the study.

Researchers catalogued the nature of every break and fracture on the 84 skeletons from the parish graveyard, 155 from the hospital and 75 from the friary.

Fractures were more common in male remains (40%) than female (26%) across all burials.

While the poor had the most fractures, the most extreme injury was found on a friar suspected to have died in a cart accident.

He was identified as a friar by his burial place and belt buckle.

“The friar had complete fractures halfway up both his femurs,” said Dr Dittmar.

“The femur [thigh bone] is the largest bone in the body.

“Whatever caused both bones to break in this way must have been traumatic, and was possibly the cause of death.”
She said that today’s clinicians would be familiar with such injuries from those hit by vehicles – it is the right height.

“Our best guess is a cart accident,” she said. “Perhaps a horse got spooked and he was struck by the wagon.”
Another friar had defensive fractures on his arms and blunt force trauma to his skull, suspected to have been inflicted by another person.

A female skeleton in the parish graveyard displayed signs of suspected domestic violence – rib, jaw, foot and vertebrae fractures that healed before death.

Dr Dittmar said the parish graveyard was, at the time, close to where urban met rural.

“Men may have worked in the fields with heavy ploughs pulled by horses or oxen, or lugged stone blocks and wooden beams in the town,” she said.

“Many of the women in All Saints probably undertook hard physical labours such as tending livestock and helping with harvest alongside their domestic duties.

“We can see this inequality recorded on the bones of medieval Cambridge residents.

“However, severe trauma was prevalent across the social spectrum.

The findings are published in the American Journal of Physical Anthropology.
(PA)

Polls close with turnout of just 52.75% in abortion referendum

After weeks of intense exchanges, Gibraltar votes today in referendum on abortion laws