The Earl and Countess of Wessex will visit Gibraltar in June to see the Royal Gibraltar Regiment parade its new Regimental Colours on home soil.

Prince Edward, the Queen’s youngest child, confirmed the trip as he presented the colours at a ceremony in Windsor Castle on Thursday.

The colours had first been approved by the Queen.

“This is your Sovereign’s personal recognition of your professionalism, skill, courage and unique contribution to our nation’s defence,” Prince Edward told the assembled soldiers, dignitaries and guests, who included families and friends.

“On behalf of Her Majesty, I hand over these colours in the confidence that you will guard them well.”

“That they will be symbols of the Royal Gibraltar Regiment’s enduring spirit and devotion to duty.” 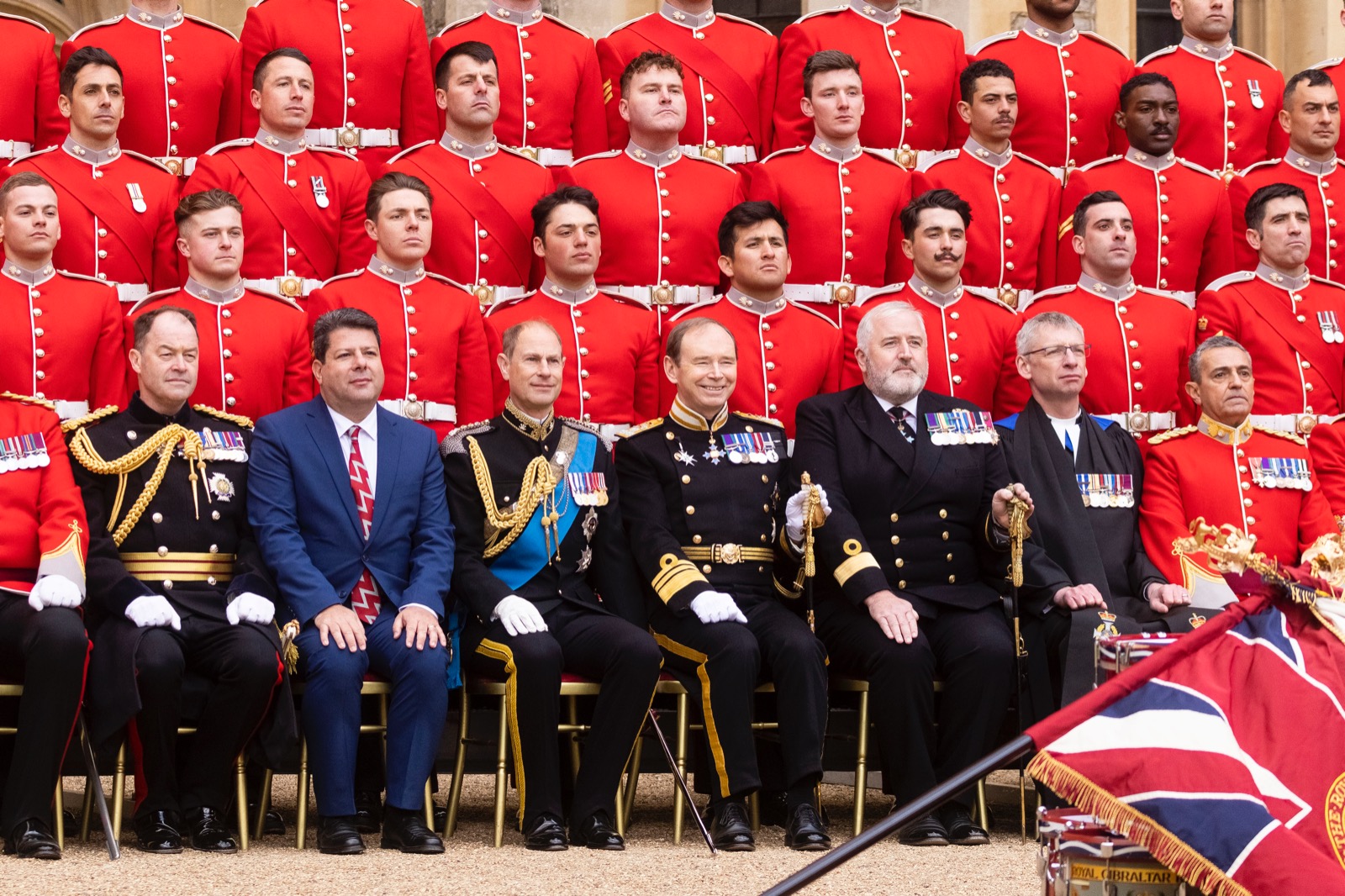 “That it will inspire you in the face of uncertainties.”

“That as an emblem of your achievements it will be an embodiment of your regiment’s traditions, heritage and ethos.”

“But most importantly, I give it into your care as a token of Her Majesty’s admiration and trust in each and every one of you and in the regiment in which you serve.”

Prince Edward said this was a proud moment for the regiment and for Gibraltar, describing it as “unique and memorable” for all involved.

It has been some 25 years since the regiment last had new colours and this is the first time the flag bears the prefix Royal, which was earned in 2009. 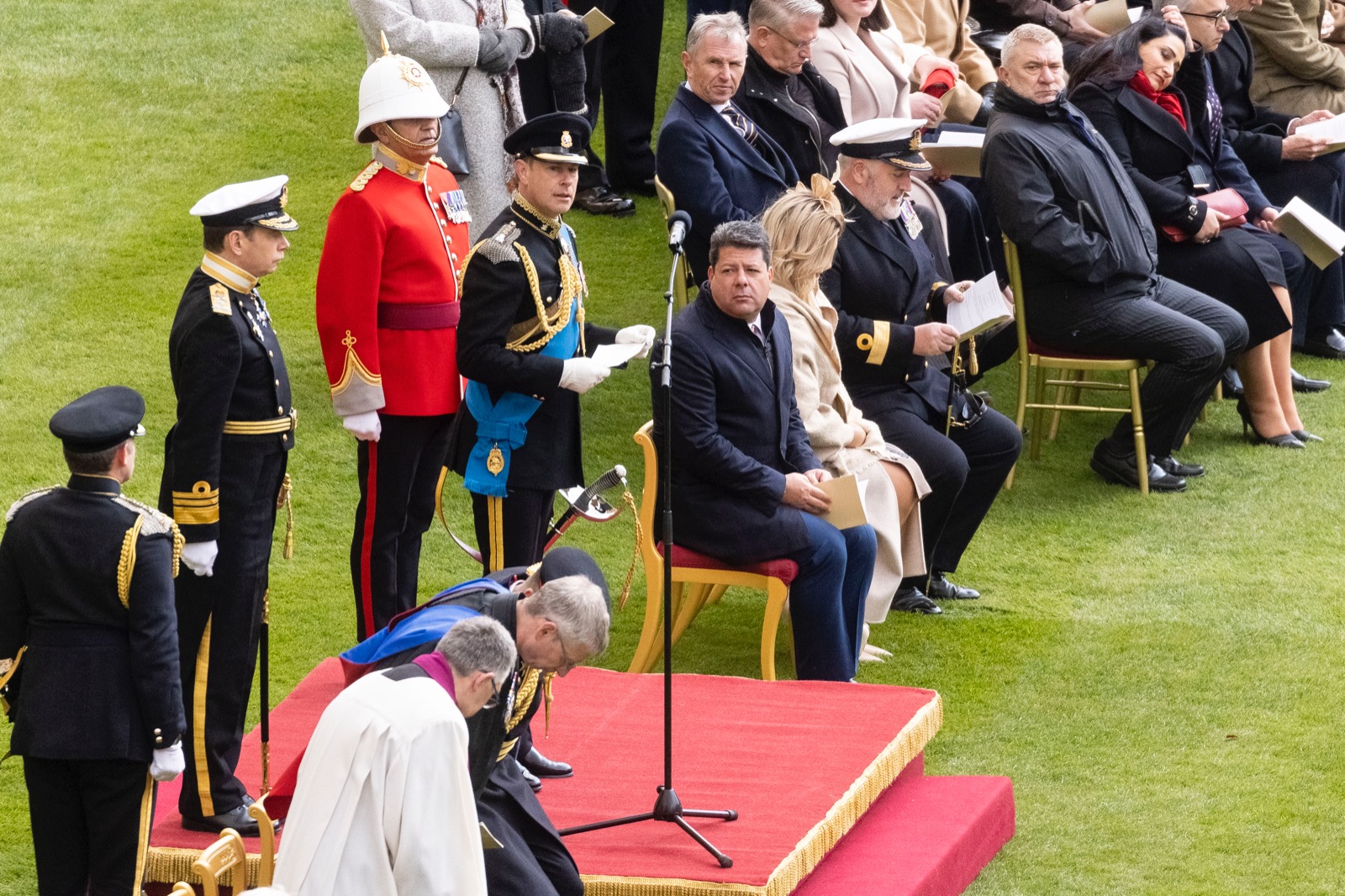 And as he presented the flag, Prince Edward reflecting on the soldiers’ role against the backdrop of international upheaval.

“With the backdrop of the horrendous events in Ukraine, the need for our defence forces and, in particular, the key role played by volunteers and reservists has been brought into sharp relief for many,” he said.

“Defence of the Rock has always been your priority, but your specialist skills means that you have been called upon to support the UK’s operations in many different theatres.”

“The Army in which we serve today may be technologically different to that of yesterday, it may have different capabilities, but it still depends entirely on the men and women who serve to make it work and to make it the best.”

Prince Edward last saw the regiment 10 years ago in Casemates for The Queen’s Birthday Parade, “and what an excellent parade that was”.

“That was also a Jubilee year and you also conducted public duties in London.”

“It’s good to see the Barbarians back and your distinctive pith helmets in this, Her Majesty’s Platinum Jubilee.”

“You should be justly proud of your successes and achievements, recognised in their own right by this presentation of your Regimental Colours today.”

“My wife and I look forward to seeing them being carried on parade on your home soil in the not too distant future. Well done today and I wish you all every good fortune.”

The Royal visit will take place from June 7 to 9, the Office of the the Governor confirmed.

“The visit in Her Majesty The Queen’s Platinum Jubilee year is a reminder of the unbreakable bond between the UK and Gibraltar," said the Governor, Vice Admiral Sir David Steel.

"I look forward to receiving Their Royal Highnesses. They will be warmly welcomed.”

"The visit of the Earl and Countess will be a highlight for us in Her Majesty The Queen's Platinum Jubilee year and will be an opportunity for the people of Gibraltar to once again demonstrate our deep and unwaivering affection for our sovereign and the Royal family as the embodiment of the British sovereignty of Gibraltar,” he said.

"I know that all of Gibraltar will look forward to the visit and that we will welcome the Earl and Countess with open arms, as only Gibraltar and the Gibraltarians know how.”

Some 80 members of the Royal Gibraltar Regiment attended the colours event in Windsor Castle, with 64 of them taking part in the parade.

The regiment is currently conducting ceremonial public duties in London, the third time its has performed these high-profile duties.

The regiment took over from the Coldstream Guards at the famous Changing of the Guard ceremony at Buckingham Palace on March 21 and have since been guarding The Tower of London, St James’ Palace and Windsor Castle.

“To receive new colours at Windsor Castle truly is an honour and will be such a memorable experience especially for the junior soldiers,” said the regiment’s Commanding Officer, Lieutenant Colonel Simon Dyson.

“It is a real highlight in the regiment’s history.”

The old colours will be returned to Gibraltar and laid up in the King’s Chapel along with the regiment’s previous flags.

“So they remain sacred and important, but they are retired,” Lt Col Dyson added.

“New colours we get once every 20 or so years, so it is a unique event.”

He reflected too on the special importance for Gibraltar’s soldiers of mounting guard duties in London.

“For most of them it is a once in a lifetime opportunity and career experience and they have been making the most of it,” he said.

“It is unique and you do get pinch yourself moment standing on the forecourt of Buckingham Palace, performing the ceremony of the keys in the Tower of London.”

“The soldiers I have spoken to have loved it.”

There is a very visible difference between the two.

The new colours will be on parade in public next week at the Queen’s Guard Mount at Buckingham Palace, when the flag will be marched on the forecourt.

Commodore Dainton said the occasion was “an exceptionally important and prestigious event”, and it was a personal privilege for him as CBF with overall responsibility for the regiment.

And amid the pomp and ceremony, he reflected on the vital operational role played by the soldiers under his command, and their contribution too to Gibraltarian society.

“Every day I see these young soldiers and officers out doing exceptional work in Gibraltar, not just the ceremonial aspects but I see them deliver operational effect every day,” he said.

“I see soldiers being ready to protect ships and submarines coming into Gibraltar harbour.”

“It’s not that long ago that they were building Nightingale Hospitals or delivering vaccines."

“So, Royal Gibraltar Regiment soldiers are absolutely in the fabric of our society in Gibraltar and it is a great privilege and a great honour for me to be the Commander anyway, but even more so with the presentation of the new colours.”

He noted that there will be an opportunity for the regiment to parade the colours on the Rock later this year, with early discussions on dates taking place at present.

“This opportunity is a really important one and one we must take,” he added.

He also told the Chronicle that the recent recruitment drive is buoyant and that the regiment is seeing a number of young recruits who will go through stringent tests to ensure they are up to the task.

“At the moment we are in a strong position as far as recruitment,” he said, adding that events such as the presentation of the colours will help recruit new soldiers.

“When they see this and they hear about this and they hear about the great honour and the privilege that the Royal Gibraltar Regiment soldiers are guarding the Queen and the other Royal palaces around London and the great privilege that comes with that - and not forgetting their day-to-day job - I think that is increasingly exciting and increasingly varied and that to me will be the thing that hopefully will entice more young boys and girls to join the Gibraltar Regiment and have a great fulfilling life.”

He reiterated the fact that the regiment wants to recruit the right people and it does not matter where they are from.

Should they come to Gibraltar from the UK, they are doing so because of the nature of the work the regiment does and the beautiful location where that work is carried out, he said.

“So for me it does not really matter where they are from,” Commodore Dainton said.

Speaking after ceremony, Chief Minister Fabian Picardo said: "Today has been one of my proudest moments as Chief Minister and the whole of the Government, and the Cabinet in particular, express our most sincere congratulations to all current and former members of the regiment on this important day.”

"Seeing the regiment at Windsor, receiving their new, blue Royal colours was a quite magnificent moment.”

"The ceremony, carried out by His Royal Highness the Earl of Wessex, was as symbolic as it was emotional.”

"The emotive words of the Earl evoked the depth of the loyalty of the people of Gibraltar and were reciprocated by the excellent response from the regiment's Commanding Officer, Lieutenant Colonel Simon Dyson.”

"It was particularly poignant that the ceremony was taking place at Windsor, within earshot of Her Majesty The Queen herself, where she is in residence, with the Royal Standard consequently flying above Windsor Castle.”

"The nature of the colours ceremony and the mounting of the guard at Windsor and other Royal Palaces by the Regiment is a vivid, technicolour demonstration of the relationship between our sovereign and the British Crown and the regiment.”

"It is therefore also an indelible demonstration of the undeniably British sovereignty of Gibraltar which has once again been evidenced in this important moment in the history of the regiment.”

"I want to also thank the members of the Bermuda Regiment who have been joining their Gibraltarian colleagues in the ranks of the regiment on these ceremonial duties.”

“They too should be very proud of the work they have done in these deeply symbolic events that carry such meaning for our people.”

"Finally, I want to thank the families of the members of our regiment for coming out to London to support those on parade and for their constant, enduring backing for the work of the regiment.”

“I know they are a sine qua non for each and every member of the regiment at every rank.”

"The pride we feel today in the regiment will be in display in Gibraltar when we welcome 'the Barbarians' back home to the Rock with their new colours, something I know we will all be looking forward to."

EDITOR'S NOTE: An earlier version of the article was updated to include the date of the Royal visit.