Both officers have been performing the role on a temporary promotion basis for an extended period.

“This now provides a more solid structure within Senior Management, allowing for the process of formal handovers to proceed as we face these challenging times,” the GFRS said in a statement.

“They will be supporting the recently appointed Chief Fire Officer Colin Ramirez in the ongoing development of a Fire and Rescue Service that is ambitious, modern and proficient in making Gibraltar a safer community.”

Deputy Chief Fire Officer Matthew Payas joined the Fire Service in 1998 as a firefighter at the Defence Fire and Rescue Service at RAF Gibraltar. After successfully completing a basic firefighting course at RAF Manston in the UK, in domestic and aircraft fire-fighting, he was awarded the silver axe for best overall recruit.

In August 2000, he joined the GFRS, formerly the City Fire Brigade, where after completing the foundation course in fire-fighting and other applicable categories, he also obtained the award for best overall recruit.

During his initial years at the GFRS he undertook and successfully passed all his statutory qualifications.

“In October 2009 he obtained his first promotion to Leading Firefighter, and immediately demonstrated his capabilities as a leader and team motivator, a clear sign of what was to come, and the start of an impressive career,” the GFRS said.

DCFO Payas has attended numerous Operational, Tactical and Strategic command courses at the Fire Service College and other UK and European training providers.

These courses have helped him acquire skills as a Fire Fighter, Instructor, Incident Commander, and Senior Manager whose primary objective is to set the standard and provide support and guidance across all sections within the GFRS in order to ensure that we comply with our obligations as an emergency service.

“DCFO Payas stepped into the Senior Management Team in 2015 where he has become an asset to the overall development of the GFRS, and has been actively involved as project manager in the elaboration of an implementation strategy for the future and ongoing development of the organisation,” the GFRS said.

“He will continue to lead on current and future projects that will take the GFRS to the next level, in addition to the daily challenges of ensuring that the performance and competence of this department is maintained at the expected level of professionalism and efficiency required to serve the community of Gibraltar.” 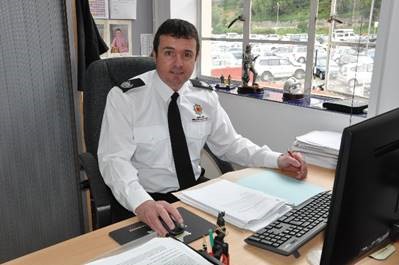 Divisional Officer Ivan De Haro joined the Gibraltar Fire and Rescue Service in January 2000. During the subsequent years he acquired all the mandated statutory examinations required to be eligible to progress through the ranks.

After his successful application to leading firefighter in 2007, Mr De Haro moved into our Fire Safety Department.

Soon after his transfer to Fire Safety, he successfully completed the fire investigation course as well as all the essential Fire Safety Courses at the Fire Service College.

“Over the years he has gained a wealth of knowledge, skills and unquestionable understanding to be able to form part of the building control planning process, whereby from a fire safety advisory perspective he has led the most challenging building projects including high rise buildings, schools and multi-use complexes that have been constructed in Gibraltar in recent years,” the GFRS said.

“DO De Haro has always shown his leadership skills and relentless pro-active approach to promoting the image of the Fire Service.”

He was part of the GFRS’ six-a-side football team that has won the world fire fighter games in this category on three occasions. During 2015 he was the prime figure and the lead drive behind most of the events organised by the organisation for our 150th Anniversary celebrations.

“He is also a vital member of the organisation’s research team involved in the scoping exercise for the development of the new fire station.”

Mr De Haro now takes on the challenging role of commanding the GFRS’ Fire Safety Department and promoting staff development so that the organisation can continue to meet applicable legislation, latest relevant codes and guidance procedures in the rapidly developing science of Fire Safety and align this department’s processes with 21st century working practices.

“These are two vital pieces of the puzzle that is the Senior Management Team and there is no doubt that they will be incredible assets to the overall long-term strategy of the department as well as role models for the new generation of Fire Fighters,” said CFO Ramirez.

“I want to congratulate both officers for what they have achieved throughout their respective careers and wish them every success as we navigate through these challenging times.”

Bars and restaurants reopen for first time this year

Caitlin Moran: My favourite books to give to your mum on Mother’s Day