The Queen, accompanied by Sir Joshua Hassan, at the Assembly Rooms where she attended a luncheon given by the Legislative and City Councils in her honour.

Some 68 years ago, Queen Elizabeth II visited Gibraltar on May 10, 1954, for the first and last time during her reign, before her death on September 8.

She was joined by Prince Philip and her children Prince Charles and Princess Anne, then just four and three years old.

According to the Chronicle’s front page on May 11, 1954, “From every home a flag, from every street and lane a cheer” was how the people of Gibraltar welcomed Queen Elizabeth II.

The event was called one of the “greatest days in Gibraltar’s history” which saw crowds of Gibraltarians line the streets waiting to catch a glimpse of the Queen. 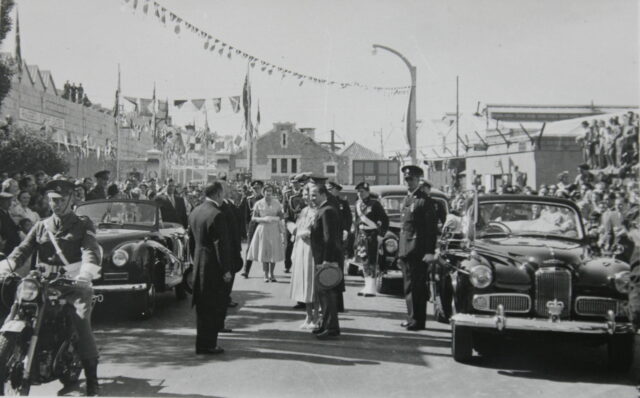 The two-day visit to Gibraltar was part of the Royal Tour that saw Queen Elizabeth travel to various Commonwealth countries including Australia and Bermuda.

Security checks at the frontier tightened during the Queens visit with a “close examination” of all 12,000 men and women that resulted in many workers two hours late.

Queen Elizabeth was just 27 years old when she visited the Rock and had held the title for under a year, with her coronation in June 1953.

The tour was a time for the young Queen to make herself known throughout the globe and was known as the “twentieth century Queen” at the time. 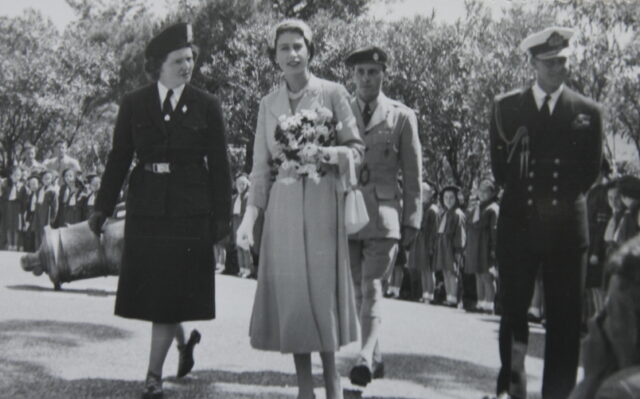 During her visit to Gibraltar Queen Elizabeth had a “heavy programme” of ten ceremonies in 13 hours.

Her Royal review of 3,000 servicemen from the Army, Royal Navy and Royal Air Force, at North Front reportedly saw some 15,000 spectators cheer the Queen.

A Royal Gun Salute of 21 guns was fired and all participating removed their headdresses and gave “three vociferous cheers”. 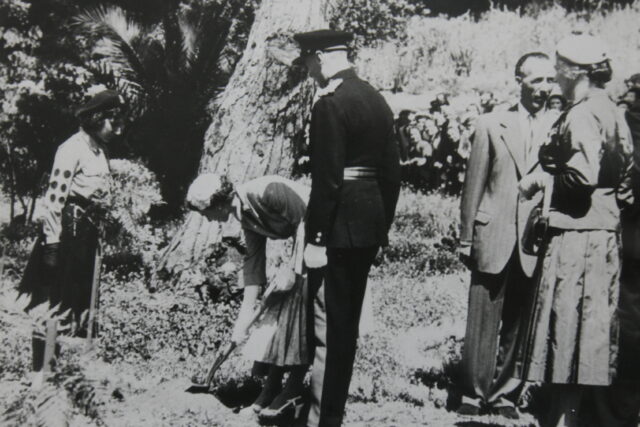 The Royal visit also saw no Spanish demonstrations across the border.

The Chronicle reported how the Military Governor of Algeciras, General Cuesta Monereo, told Reuters he would “make sure” there would be no demonstrations during the Queen’s visit to the Rock.

The Queen also visited General Eliott’s Monument and, alongside her husband the Duke of Edinburgh, planted a tree in the Alameda Gardens. 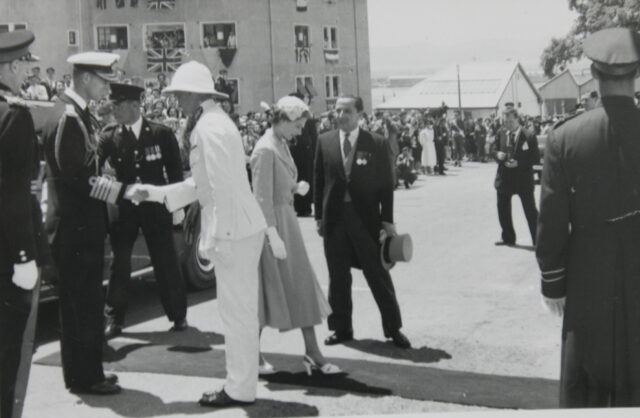 Queen Elizabeth travelled to Gibraltar on HMS Britannia and within 15 minutes her first job on the Rock was to open and rename Reclamation Road to Queensway.

From there her packed schedule starting at 10am saw the Queen review the Combined Services and then drive through Gibraltar greeting crowds of people. 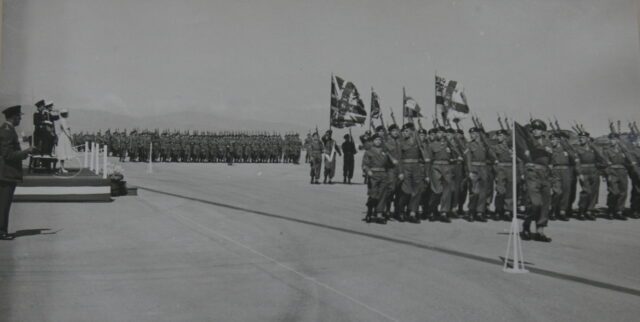 Within the next four hours from 12pm to 4pm, the Queen visited the City Council Waterworks, the Convent, the Assembly Rooms, the Eliott Memorial and the Victoria Stadium.

She dined for lunch at the Convent and presented the ‘Queen Elizabeth Cup’ at the Victoria Stadium to the captain of the winning team. 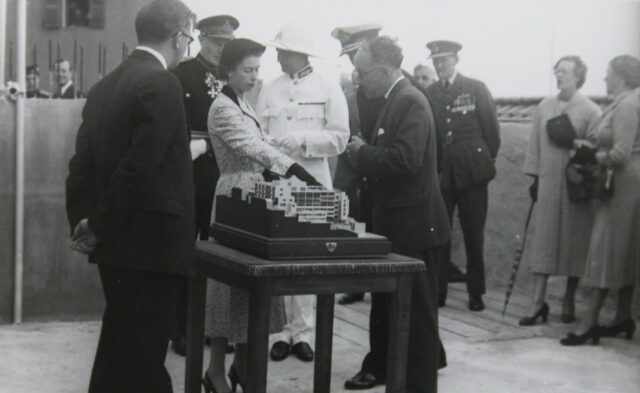 At 4.10pm, it was time teatime for the Queen at the Royal Gibraltar Yacht Club.

After a 50 minute tea she returned to her Royal Yacht Britannia, leaving later on for a three hour dinner at the Convent. 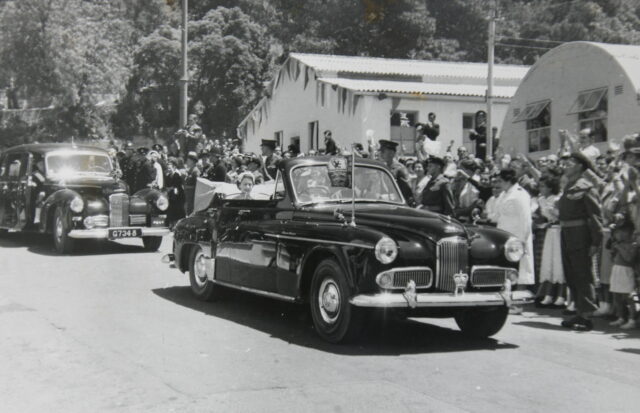 The next day the Queen visited the Upper Rock laid the foundation stone of the now defunct Colonial Hospital.

She used a silver trowel and declared the stone “well and truly laid”, according to the Chronicle. 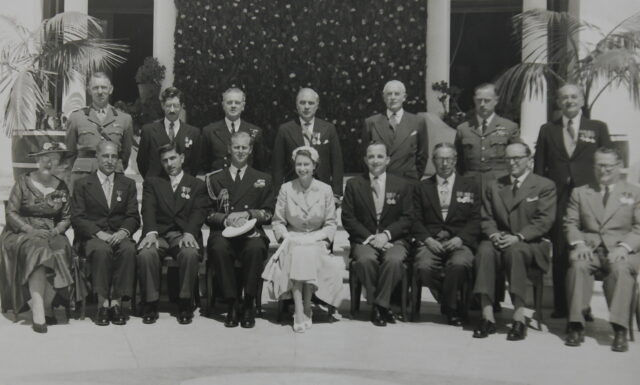 She was also shown a model of the new hospital and, with the Duke of Edinburgh, signed the visitors’ book.

Her final visit was to Catalan Bay. 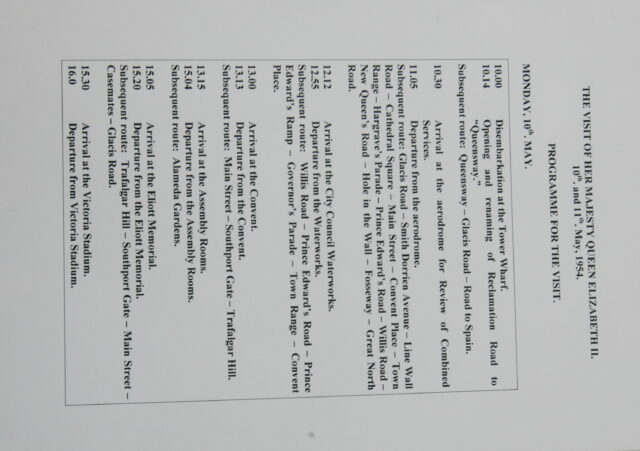 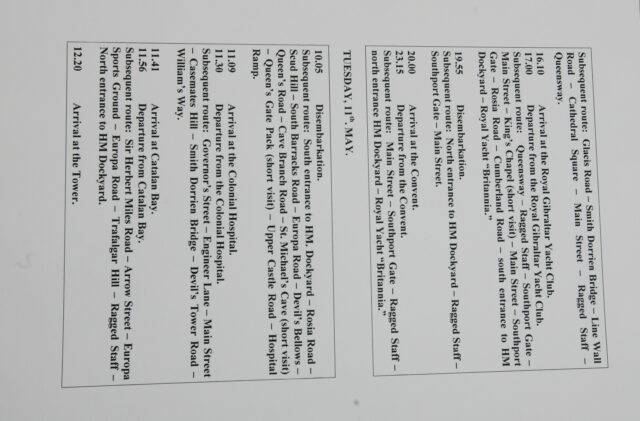 The Queens 1954 message during a lunch at the Convent:

“It is a great pleasure for my husband and me to be here together for the first time in Gibraltar.”

“The Rock in famous in history for three things: for its inviolable strength as a fortress, for the loyalty of its people and for the important strategic part it had played on so many different occasions.”

“It gives me, therefore, particular satisfaction to be attending this Luncheon given jointly by you, as the official and the elected members of the Government of Gibraltar, and to see here together the Governor and his senior officials, the representatives of the people, and the heads of the Services.”

“I thank you warmly for your most loyal and welcoming address and for the beautiful picture which you have presented to me. I am very glad that the person chosen on this occasion to deliver the address and the gift should be both the senior elected member of the Legislative Council and the Chairman of the City Council.”

“This occasion may be regarded as a landmark in your history and it indicates a determination to go forward in the future in partnership and in amity for the good government and sure safekeeping of the Colony and Fortress of Gibraltar.” 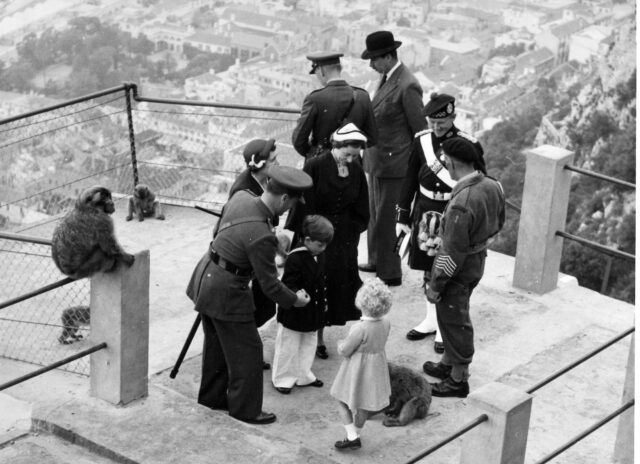 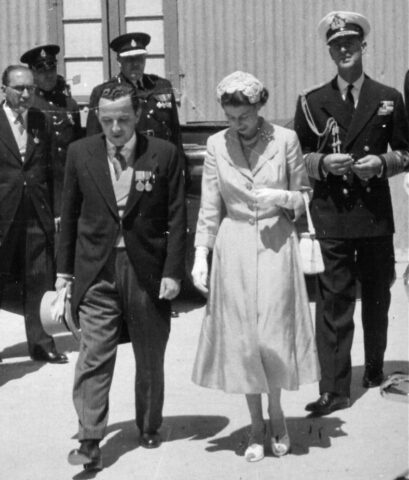 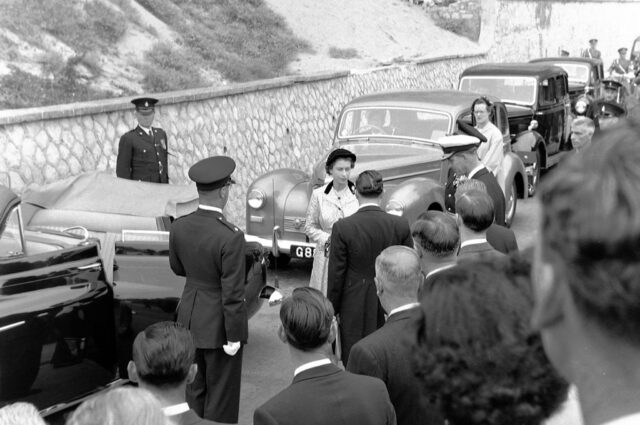 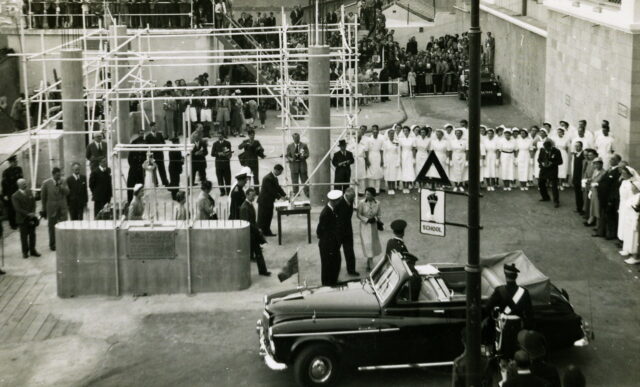 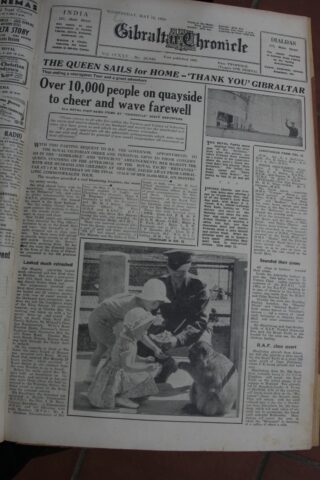 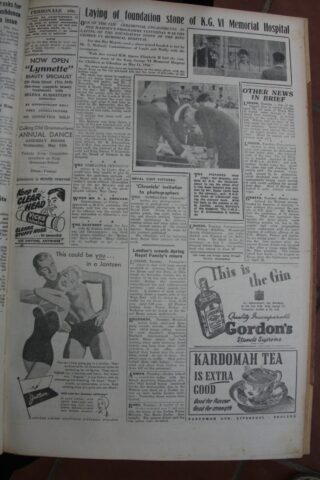 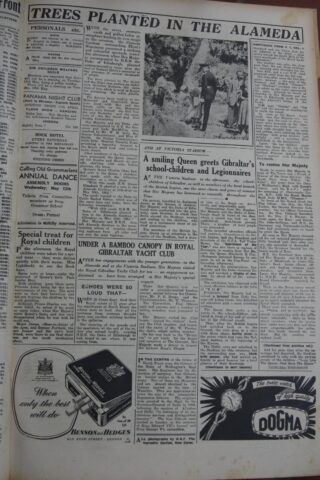 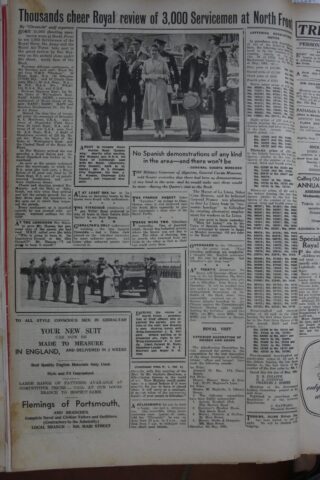 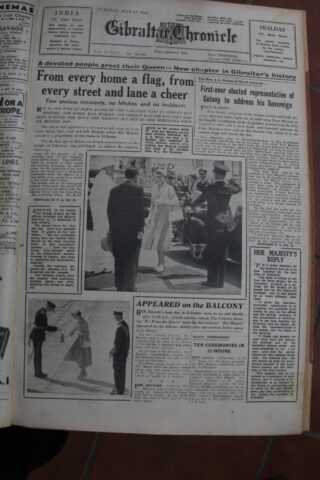 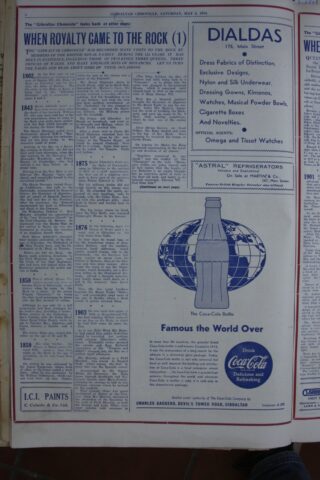 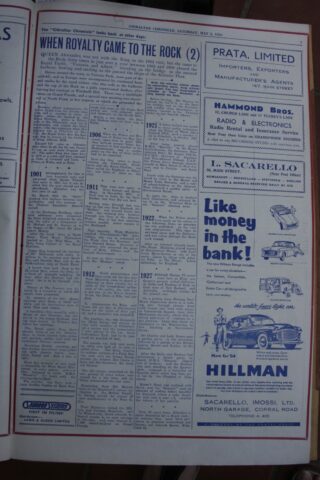 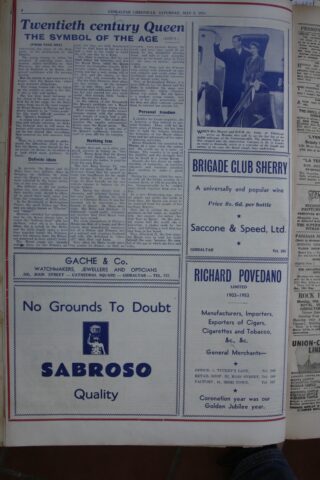 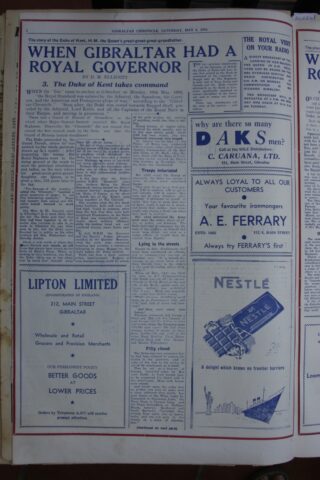 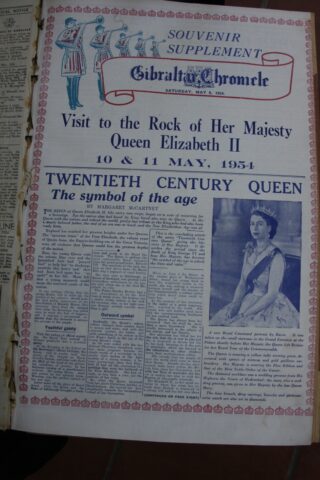 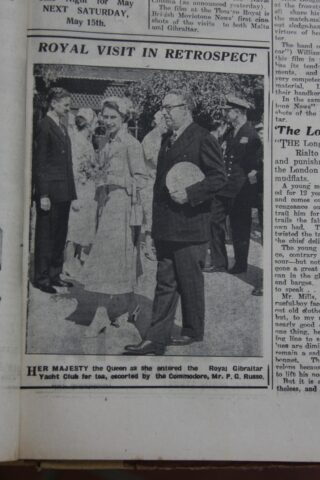 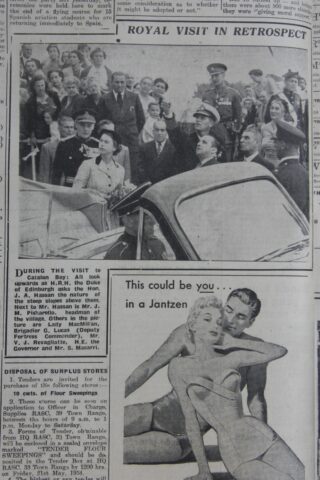 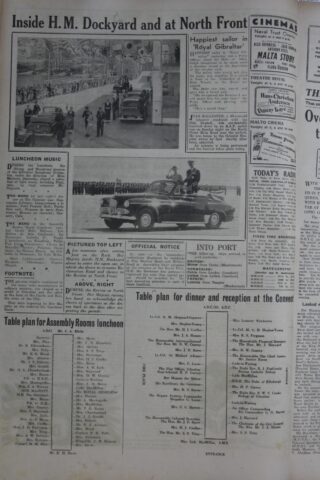