The UK, Gibraltar and Spain have “a good track” and “goodwill on all sides” to negotiate a UK/EU treaty on Gibraltar’s future relationship with the bloc, UK Foreign Secretary Dominic Raab said on Monday during a whistle-stop visit to Gibraltar.

Mr Raab flew into Gibraltar at lunchtime for a meeting of the UK-Gibraltar Joint Ministerial Council [JMC], the first time the council had convened in Gibraltar since it was established in 2016 after the Brexit referendum.

“We had the opportunity to discuss how we turn the framework that we agreed over the Christmas period into a legally-binding treaty with our EU partners,” he said during a brief exchange with reporters alongside Chief Minister Fabian Picardo.

A key item on the JMC agenda was the forthcoming negotiation for the Gibraltar treaty envisaged in a framework agreement agreed by the UK, Gibraltar and Spain on New Year’s Eve, and which all three governments hope can be finalised by the end of June.

Asked about the areas that remain to be resolved, Mr Raab expressed confidence that the negotiations would be fruitful.

“Everyone knows that these negotiations can be difficult but I think we dealt with a lot of the stumbling blocks and surmounted them in the negotiations we had over the Christmas period,” Mr Raab said.

“So the focus that we take with Fabian and his team is to faithfully replicate what's envisaged in the framework in a legally-binding treaty, and to start thinking less about obstacles and more about the potential for win-win.”

“And obviously we want to get this done in the [June] timeframe but let's strive for the right result and be flexible to allow us to achieve it.” 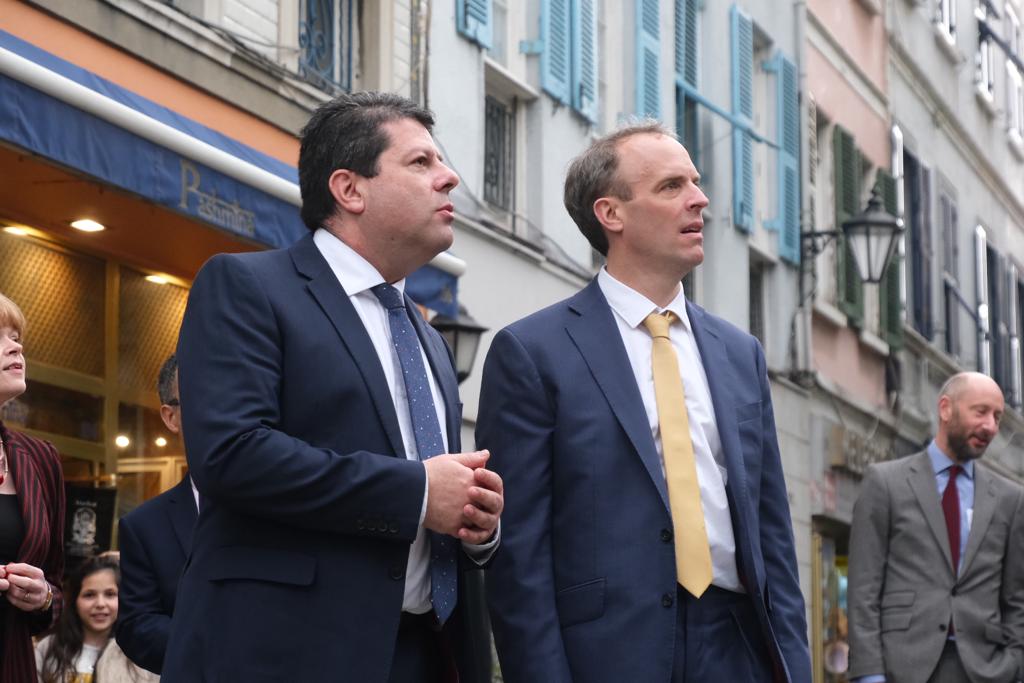 The negotiations for the treaty have yet to commence and the European Commission is finalising a mandate that must be approved by the European Council before the talks can commence.

The process comes against the backdrop of friction between the UK and the EU on issues such as Northern Ireland and the supply of Covid-19 vaccines.

Pressed by reporters on how those tensions might impact the Gibraltar negotiations, Mr Raab said he remained “reasonably confident” that the treaty could be successfully agreed.

"Look, I think we've got a good track here and I think the advantage of having had the negotiation over the December period is that we built up some goodwill on all sides,” he said.

“We're committed to resolving all of our tensions with the EU in a pragmatic, sensible way.”

“Obviously it always takes goodwill on all sides but actually I'm reasonably confident, given the process we've already been through, that we've got a good track and again, with hard work and goodwill on all sides, I think we can turn this framework into a legally-binding treaty and I think that's good news all round.” 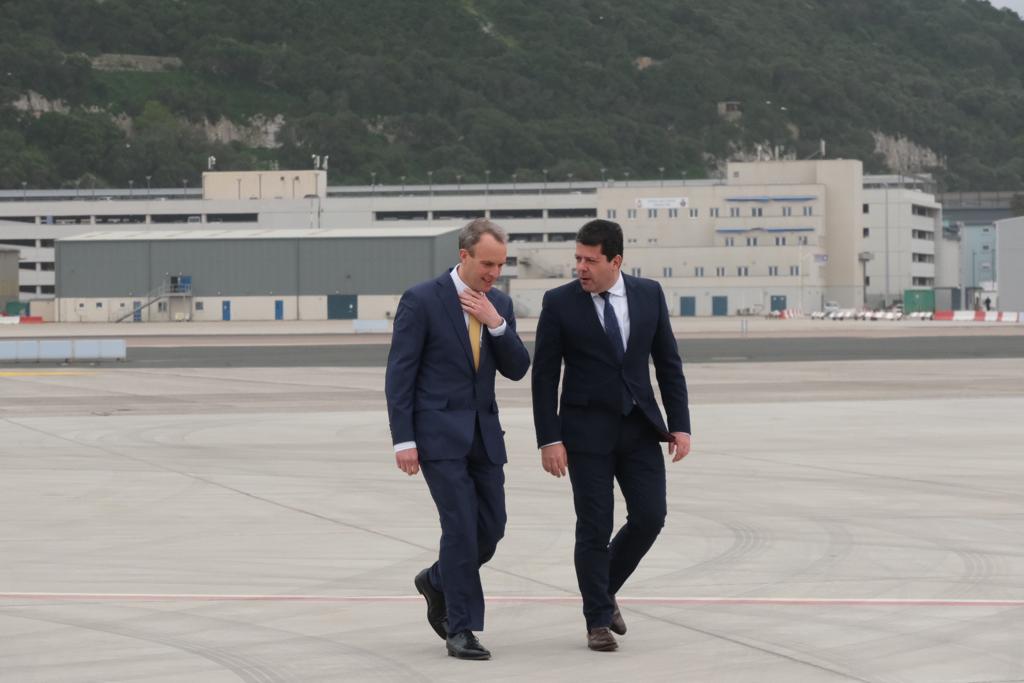 The Foreign Secretary arrived at Gibraltar International Airport at lunchtime on Monday and was greeted on the tarmac by the Governor, Vice Admiral Sir David Steel, and the Chief Minister.

Prior to the JMC meeting he toured the Upper Rock, stopping at the Queen’s lookout and the Upper Galleries for a bird’s eye view of the runway and border area, before taking a short walk down Main Street.

Mr Raab was accompanied by Wendy Morton, the Parliamentary Under-Secretary of State for European Neighbourhood and the Americas at the Foreign, Commonwealth and Development Office, as well as Hugh Elliott, the UK’s ambassador to Spain, and Theo Rycroft, the Director for EU Exit at the FCDO.

The delegation met too with the Leader of the Opposition, Keith Azopardi, and the Leader of Together Gibraltar, Marlene Hassan Nahon.

The visit was kept tightly under wraps for security reasons until Mr Raab was in Gibraltar but the Chief Minister said the Foreign Secretary’s presence on the Rock sent an important message about the UK’s close relationship with Gibraltar.

The Chief Minister expressed “the sincere gratitude” of the people of Gibraltar for the UK’s support not just in terms of the Covid-19 pandemic, the vaccination programme and the £500m sovereign guarantee, but with the Brexit process including guaranteeing continued market access for Gibraltar-based companies.

“He has demonstrated, as has his government, that he is a very good friend of Gibraltar, and the deputy Chief Minister and I have been delighted to see him in Gibraltar.”

“Gibraltar has faced many challenges in the past five years since the result of the Brexit referendum came in on the 24th of June, 2016, and an almost insurmountable challenge we might have all thought last year with the issues that were facing us with Covid.”

“Despite that, we have worked with the United Kingdom in close partnership, we are able to see a way through all of those challenges, and I think the message that I have wanted to give to the Foreign Secretary is that the people of Gibraltar have realised now more than ever how lucky we are to be British.” 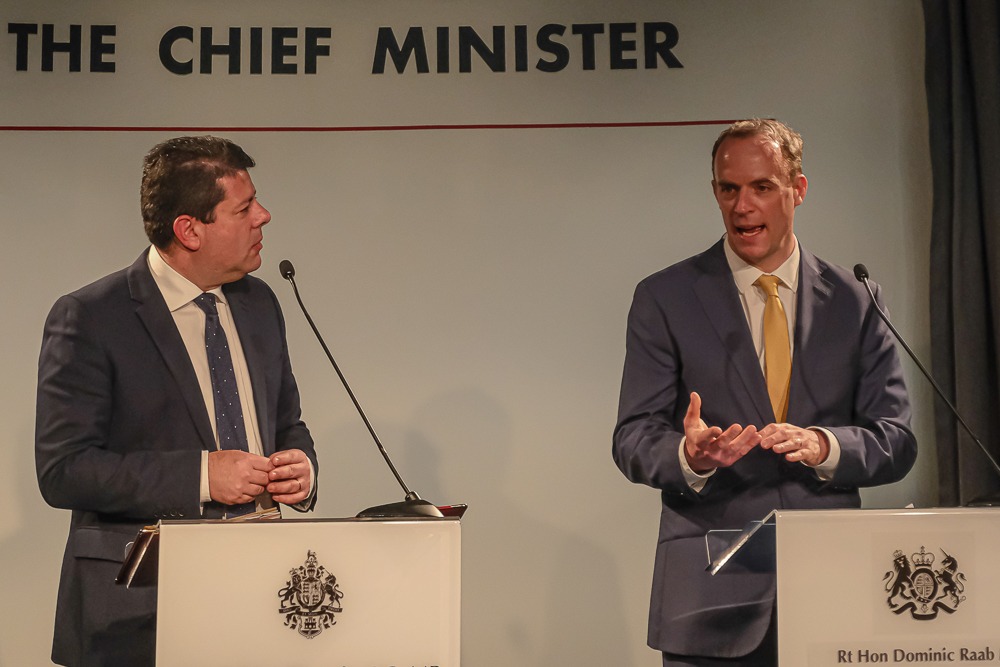 The UK-Gibraltar Joint Ministerial Council is the highest negotiating forum for ministers to come together and discuss matters of shared importance.

It was originally formed to discuss the UK’s exit from the European Union, but now also acts as a forum for “agile discussion” between the UK and Gibraltar across the range of shared interests.

Mr Raab said it was “a great honour and a great pleasure” to participate in the first JMC meeting held in Gibraltar.

“We’ve got an excellent working relationship,” he said.

“I think the Government of Gibraltar have done exceptionally well throughout this crisis and I think it helps that on a personal level we've got such a good dynamic, served so ably by the officials and the various teams that support us.”

“And I think that bodes very well for the weeks, months and ultimately years ahead to make sure that Gibraltar can realise its full potential.”

Asked during the exchange with journalists whether his visit to the Rock was a presage to unwelcome news, Mr Raab shrugged off the question and replied: “There’s no lurking bad news for you at all, sorry to disappoint you.”