Margaret Atwood has been given a rare honour by the Queen.

As part of an investiture ceremony at Windsor Castle on Friday, the Canadian author was presented with an Order of the Companions of Honour for services to literature.

Atwood, who was awarded the Booker Prize for The Testaments, her sequel to The Handmaid's Tale, earlier this month, told the PA news agency she was "emotional" as she approached the Queen to receive the honour.

After the ceremony, the writer said: "I got a bit emotional. You're really looking at a lot of history and I'm old enough to remember a lot of that history.

"Short form, she was brilliant in the war."

Atwood added: "When you see the Queen at her age and her schedule that she puts out, it's an inspiration to everybody, you just keep going."

The author said she was surprised both by her second Booker Prize win and her ongoing cultural impact.

She said: "At my age, it's not the usual thing. Usually at my age you sort of fade away and that doesn't seem to be happening yet." 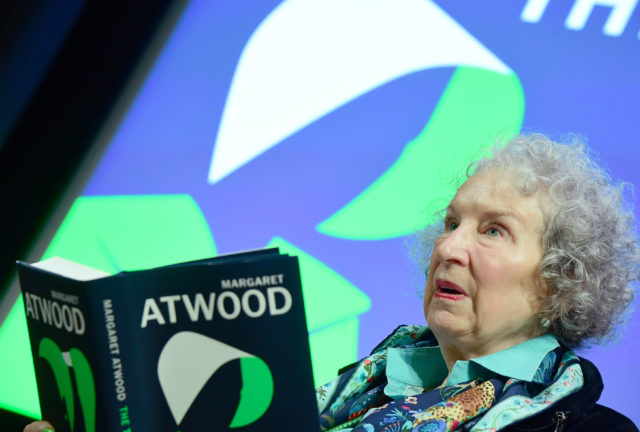 Atwood then spoke about the impact of her work worldwide.

The red handmaids from Atwood's best-known novel, set in the repressive state of Gilead, have been used as a symbol in protests and reproductive rights battles.

"I think that has happened because of the political situations, not just in the United States but because of other countries in the world," she said.

"Other countries you see moving back towards it, noteworthily several parts of the United States, and these signals being given by the president and his administration are not encouraging.

"In the '90s people weren't as worried but now they are."

Earlier this month, Atwood was jointly awarded the Booker Prize for The Testaments, along with British author Bernardine Evaristo, who explored the lives of black women in her work Girl, Woman, Other.

Asked about her win, Atwood replied: "Wasn't that a surprise!"

The decision to split the prize, which was only reached after the judges held a sit-in and refused to name a single winner, led to criticism that Evaristo's novel was given less prominence than Atwood's.

Asked about any difference, Atwood said her book had been well marketed.

She told PA: "I think she's getting quite a lot of prominence now. Did we do a good launch of the book? Here in the UK the team was brilliant, they've done a fantastic job.

"We launched the book in London and that was well before the Booker. So, thanks to my publishers one and all, they did that. Myself as a single person would not have been capable, and thanks also to the readers."

Atwood becomes one of 62 current holders of the Order of the Companions of Honour, which is awarded for achievement in the arts, literature, science and politics.

The order is limited to 65 people, and the author is the third Canadian on the list.

A total of 60 people were given honours by the Queen during Friday's ceremony.