Tribute was paid to singer and guitarist Neal Higgins recently, at The Lord Nelson in Casemates where he so often played with his band Thrifty Malone.

Neal sadly passed away at the beginning of the year, but due to the Covid restrictions it hadn’t been possible to hold the event earlier, but the celebration of his life on a balmy windy afternoon certainly did him proud, with many tributes being paid from his family and many friends, both in music and the spoken word. 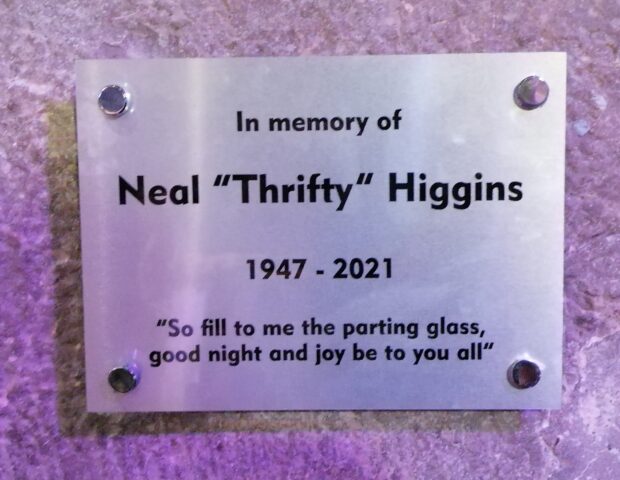 The afternoon began with heartfelt words being heard from his widow, Deborah, and his sons, Ceri and Edward, who’d travelled to Gibraltar for the event. Members of his band, including Robin Fitzpatrick, paid tribute to their former bandmate, both in recollections of his life and in their music later in the afternoon. We also saw recorded anecdotal accounts from each member of the band as well as a video of ‘Henry Street,’a song he’d co-written with Robin, and which has been aired on radio stations throughout the world. In an especially nice touch, a memorial plaque was unveiled courtesy of The Hunter Brothers by Geri Jones-Cummings.

There was also a recorded tribute from his former employer, Mesod Belilo, who gave a fascinating history of Neal’s time with the company. Of particular interest to everyone was how Mesod told how part of Neal’s job was, by frequent inspections, to ensure that the runway surface at Gibraltar airport was always safe for planes to land.

Neal certainly was a multi talented individual, who was originally born in Doncaster in 1947, and worked his way up, gaining qualifications in engineering, and being involved in various projects including supervising the building of the Gateshead Millennium Bridge on Tyneside. At this time, his partner, Deborah, who is actually a very talented artist, received a commission to paint a series of pictures covering the construction of the bridge. Despite leading a very busy working life, Neal was always able to find time for his love of music, particularly traditional Irish music, before moving to Gibraltar, to whose beating heart many talented musicians have been drawn. 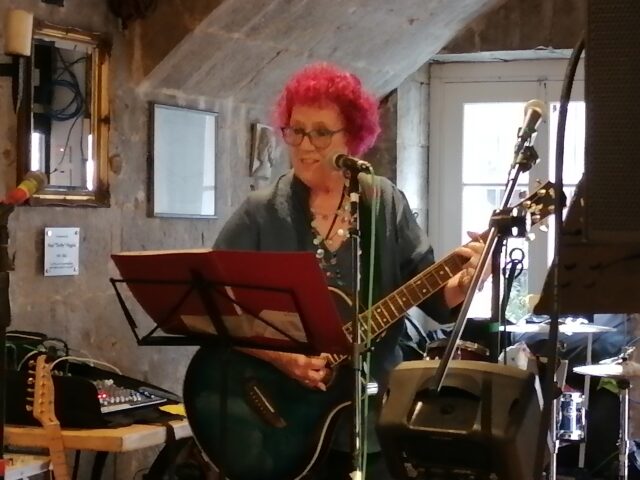 After hearing many accounts of Neal’s life, what better way was there to remember Neal, than by listening to some wonderful music, which was started by a bubbly Nottinghamshire lass by the name of Gill Chesney-Green, who sings as sweetly as all the birds in Sherwood Forest, and has often supported Thrifty Malone in their gigs at ‘The Lordy.’ Despite having a troubling cough, which was in no way detrimental to her singing, Gill gave beautiful renditions of ‘The Skye Boat Song’ and ‘Walking in Memphis.’

Another star of stage and the former Splendid Bar acoustic night, Stan Eate, did a quick number before Neal’s son Ceri played a couple of numbers, on, as he announced, his ‘Dad’s first guitar,’ with such passion that one couldn’t help but be impressed. Gibraltar is certainly represented by people from every corner of the UK; Ceri lives in Coventry, whilst his brother Edward is an erudite Royal Navy lad, who now lives in Portsmouth.

Thrifty Malone then played a worthy selection of their best played songs, of which Neal would have been rightly proud, including evergreen favourites like ‘Whiskey in the Jar,’ ‘The Wild Rover,’ Johnny Cash’s ‘Folsom Prison Blues,’ as well as Neal’s favourite song, ‘The Fields of Athenry.’ The band were in their usual good form with Tooting’s popular frontman, Trevor Emmett, with his gravelly vocals and bass riffs, whilst Robin’s mandolin complemented Alan Jenkins’ guitar superbly, and Martin Winterstein-Smith’s drumming provided an overall rock solid foundation. 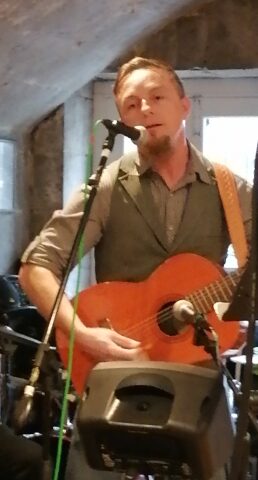 After this, there was an open mic session before Thrifty Malone, along with a stand in on drums for Martin, played a final few songs before Gill Chesney-Green, dosed with Strepsils and cough medicine, bravely returned for a final session.

Neal was certainly seen off in style; it was lovely to see so many friends old and new, who had come to remember him so well in word and song.

Personally speaking I’ll always remember him as a very capable musician; despite this he was very much a modest person who never let his many talents go to his head.