The Royal Gibraltar Police’s Drug Squad seized drugs worth £22m during 2021, as well as over 4,000 litres of fuel intended for use by drug smuggling gangs.

The figures were released on Monday by the RGP, which outlined the various operations that led to haul, many of them conducted in coordination with Spanish law enforcement agencies.

“As with most years, we were grateful for the support of the Spanish authorities in much of our work and, of course, we operated closely with HM Customs and the GDP,” said Sgt Gerry Martinez of the RGP Drug Squad.

“We now also work closely with our Economic Crime Unit – we have be able to seize high value assets such as cars and jewellery from convicted drug smugglers and money launderers.

“During last year, the tight Covid restrictions imposed by the Moroccan authorities had the effect of reducing the flow of large scale drug movements across the Strait and this allowed us to concentrate more of our attention on street suppliers within Gibraltar.”

“During the year, we carried out over 20 successful operations against these criminals who bring such significant harm to our community.”

“The RGP will continue to challenge drugs trafficking activity and all its associated criminality.”

The message was echoed by the Commission of Police, Richard Ullger, who said cracking down on drug crime was a top priority for the RGP.

Mr Ullger said he was “extremely pleased” with the results last year.

“Much of this success came as a result of the excellent cooperation we received from our partner law enforcement agencies – both within Gibraltar and across the border,” he said.

“Early in 2021, we were delighted when Parliament amended the Petroleum Act to tighten laws on the storage, transportation and possession of petrol.”

“Recent experience has shown that fuel stored in containers is often used to refuel drug trafficking launches but, whatever its purposes, it can also pose a fire risk to vehicles and residential properties.”

“Everyone in our community can be assured that, in 2022, we will continue to target those involved in all aspects of drug-related crime.”

The biggest single drug seizure last year took place on August 18 following the high speed pursuit of a rigid-hulled inflatable boat off the western side of the Rock.

With the assistance of the Customs vessel HMC Searcher, four individuals were arrested and a total of 654 bales were recovered.

These bales contained approximately 2.6 tonnes of cannabis with a street value of around £13 million.

Earlier in the year, a smugglers’ RHIB was forced to run aground at Eastern Beach following a sea chase in very bad weather.

In this operation, approximately 1.3 tonnes of cannabis resin were seized with a street value of about £6.5 million.

With the co-operation of Spanish authorities, Mourad Boulaich Mehmadi was stopped and arrested at the frontier.

He has since pleaded guilty to possession with intent to supply a Class B Drug and is due to be sentenced next month.

Resulting directly from their cooperation with the RGP, the Guardia Civil were able to carry out further operations in the Campo area in which they seized drugs valued at approximately £7.5m. 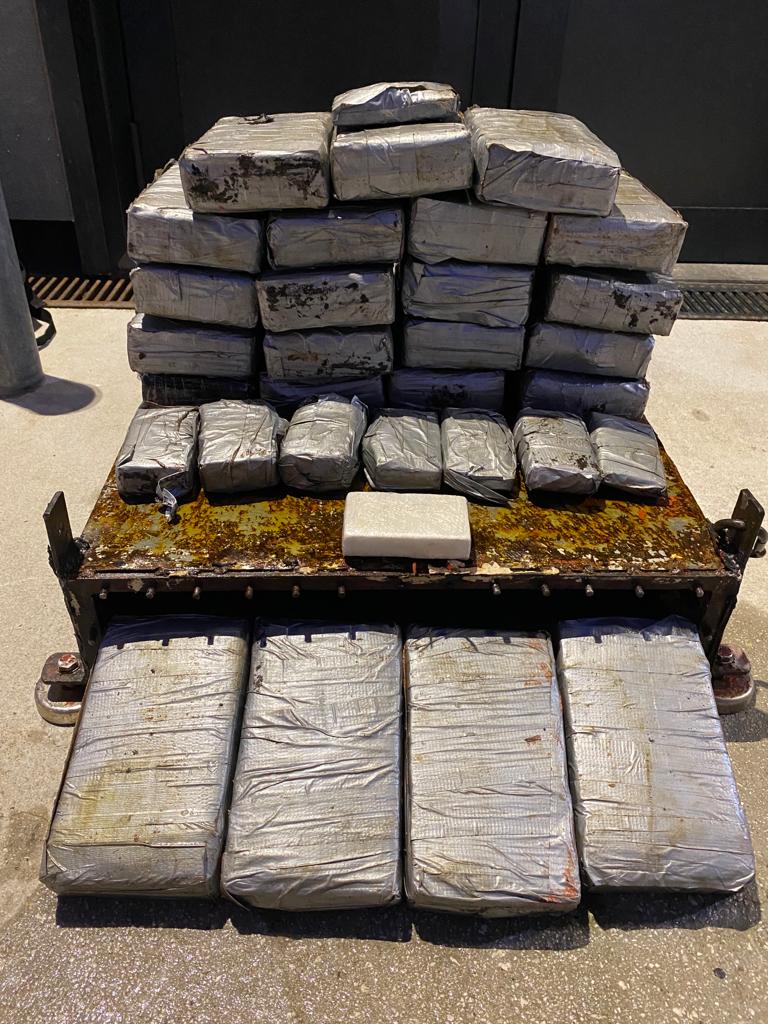 Also in January of last year, information was received of a ‘parasite’ device having been fixed to the hull of M/V Ocean Clarion, which had just crossed the Atlantic Ocean from a port in Colombia.

The Drug Squad team, supported by officers from HM Customs and other RGP departments, boarded the ship whilst it was at anchor within BGTW.

From the exterior of the hull of this vessel, officers seized the device which contained 25 kilograms of Cocaine with a street value of about £2 million.

As the ship’s crew were not complicit in this crime, the ship was permitted to continue on its journey.

On March 4, Drug Squad detectives conducted a search of the area of Eastern beach and the surrounding worksite at British Lines Road.

Supported by Gibraltar Defence Police and HM Customs Officers, as well as uniformed RGP Officers, discovered three concealed bales of cannabis resin with a value of about £450,000.

In addition to the drugs themselves, the Drug Squad also impounded a van containing a 1,000-litre industrial ‘IBC’ container, which was being used for storage of illicit fuel used in support of Drug Trafficking.

During the year as a whole, the team also seized over 200 fuel containers and over 4,000 litres of fuel – all intended for use by the criminal fraternity.