Local author Sam Benady was presented with the Lifetime Achievement Award at the Cultural Awards on Wednesday evening at the Sunborn.

The event organised by Gibraltar Cultural Services saw Dr Benady recognised for his work and efforts as a writer.

“An unassuming and humble individual who is passionate about Gibraltar and its history, Dr Benady has dedicated his free time to researching and documenting Gibraltar’s past through his writing,” GCS said.

“He has ensured that facts, myths, legends, and life stories are shared with the community. A member of the editorial board of the Gibraltar Heritage Trust Journal, he is one of the most prolific contributors, producing articles on a wide array of subjects for over 20 years.”

“His interactive online blog ‘The Keys of the City’, which has been running for over 10 years, has ensured this information has been accessible to all.”

“Described as a good literary craftsman, his fiction books and creative works are sure to stand for many years, inspiring others. His dedication to Gibraltar’s history and heritage through his writing is a tremendous gift not only to Gibraltar but worldwide for generations to come.”

The winners of the Cultural Awards were presented with their trophies at the Sunborn Hotel, in an event held to celebrate the best of Gibraltar’s arts and culture. 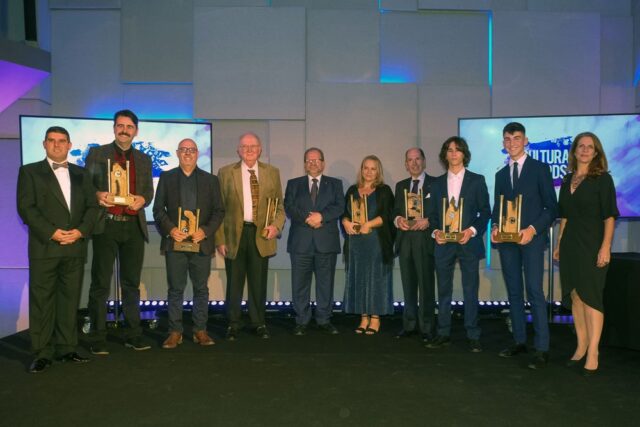 The Awards look at the achievements and successes of individuals and groups between July 2020 and June 2021.
This year the winners include Gino Ochello in the junior category, Darius Oliva in the youth category and Richard Garcia in the senior category.

The award for Best Educational Project was presented to Geraldine Martinez for her murals, while Gabriel Moreno received the prize of Cultural Ambassador.

The Special Achievement Award was presented to Michael Prescott for his services to dance and work with the Gibraltar National Dance Organisation.

“The Cultural Awards are a recognition, not just of the achievements of those who receive them, but of the richness and standard of Culture in our community, and the calibre of all its players,” the Minister for Culture, Dr John Cortes said.

“I want to thank all who have taken the trouble to nominate, all who have voted, and the panel itself for supporting the Awards and in this way supporting Culture. Gibraltarian Culture continues developing its identity further, clearly demonstrated by its resilience through Covid times, and by how it has continued to be at the heart of the community throughout this time.”

“I congratulate all nominees, and in particular the winners, young an old. As I usually do, I will specifically mention the winner of the Lifetime Achievement Award, Dr Sam Benady, who I have known for decades as a colleague in the health service, and as a neighbour, as well as for his dedication to history, heritage and literature.”

The Awards recognise and highlight potential, ability, talent and achievement, whilst at the same time supporting the community’s artistic and cultural development.

The selection process included an open invitation to the public for nominations, which led to a shortlist approved by the Cultural Awards Board. The public was then invited to be part of the process and vote for the shortlisted nominees via a telephone vote set up by Gibtelecom.

The Board also voted the awards for Cultural Ambassador, Lifetime Achievement and Special Recognition Award.