Scottish courts have “no jurisdiction” over the extradition of MEP Clara Ponsati to face a charge in Spain for her involvement in the unsanctioned Catalonia independence referendum, a judge has ruled.

Sheriff Nigel Ross agreed that the potential extradition of the former University of St Andrews academic is a “matter for the Spanish authorities”, as the MEP has indicated she will not move back to Scotland from Belgium.

As he dismissed the case at Edinburgh Sheriff Court, Mr Ross said: “Extradition in this case is impractical.

“You can’t extradite someone who is not here.”

The discharge was not opposed by the Crown’s lawyers, although they criticised a “clear breach of the position of trust that [Ms Ponsati] was in” over an alleged failure to tell the court she was resigning her post at St Andrews and moving to Belgium.

Ms Ponsati, who did not attend Thursday’s hearing, faces a charge of sedition in Spain over her role in Catalonia’s unsanctioned independence referendum in 2017.

She became an MEP after five seats in the European Parliament were given to Spain when the UK left the EU in 2020.

However in March, MEPs voted to lift that immunity.

Ms Ponsati could be sentenced to 15 years behind bars if convicted, with nine other Catalan officials given jail sentences of between nine and 13 years for the same offence in autumn 2019. 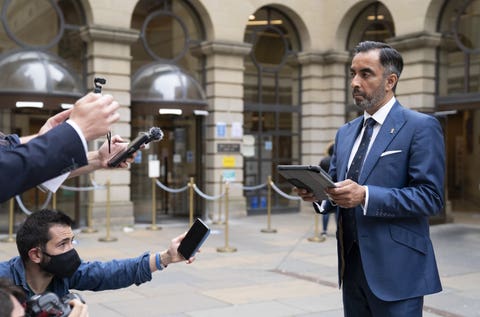 In a statement after the latest hearing in Edinburgh, Ms Ponsati’s solicitor Aamer Anwar said the MEP had her passport returned in November 2019.

She took up her MEP role in Brussels on February 1, 2020 and she now lives and works in the city.

Mr Anwar said: “This morning we appeared at court on Clara’s behalf, the court had already anticipated that Clara Ponsati was no longer in Scotland’s jurisdiction and it was agreed that she should be discharged as a requested person and these court proceedings for her extradition have finally been brought to an end.

“No rational argument has been presented by Spain which justifies the criminalisation of its citizens, who wish to peacefully argue for a different form of Government or simply the right to self-determination, recognised in terms of charter of the United Nations.

“In conclusion, Clara wishes to thank the many people in Scotland, as well as those across Europe, who have given her so much love, support and solidarity through difficult times and hopes that one day she can return from political exile to her beloved Catalonia.”

Mr Anwar said a full case on the MEP’s extradition to Spain remains to be heard at the European Court of Justice.