Still dancing under the shadows

Literature Week kicked off with a conversation between two well known men both respected in their fields, Gibraltar National Archivist Antony Pitaluga and artist Ambrose Avellano.

Joining them was Gino Sanguinetti who led the conversation on the upcoming publication of their book ‘Still Dancing under the Shadows’ to talking about the frontier closure and the world war tunnels.

It follows on from Mr Avellano’s 2014 exhibition ‘Dancing under The Shadows’ and his 2018 exhibition ‘… still dancing under the shadows’. An exhibition that focused on the modern Gibraltar history with three key aspects, historical, educational and artistic.

In describing Mr Pitaluga, the interviewer called him ‘the keeper of Gibraltar’s memories’.

“It is very interesting you using the word memory rather than history,” Mr Pitaluga replied. 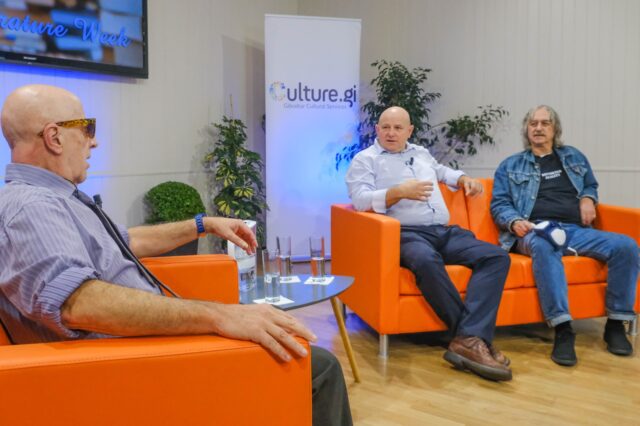 He reflected on how Mr Ambrose did not know the ins and out of the Rock’s history but that he was in a position to be able to access it.

He said Mr Avellano explained to him originally as to how this would compliment and would help convey what he wanted to say with his pieces. Especially for people who were not artistically inclined and get all of the information from the art work.

“When I initially started or tried to start writing about this I am very particular with the way I expose what I write and what I publish on the website and I write for articles and newspaper columns as the Gibraltar archivist. The remit is to gather and collect from government departments,” he said.

“The information I was sitting on is primarily viewed through a Government official side and I thought that writing from an official point of view if you were to look for your grandfather in the archives you might find him in a police list or army list and it was through an official governmental and I thought his wasn’t really so appropriate to what I think Ambrose was looking for.”

“So I decided to consult the historical official sources but then again use my own imagination,” he said.

The interview was shown live on Facebook and will be available to view via the Gibraltar Cultural Services page.