"How many of you know Breton folk dancing?" asks musician Alasdair Fraser, temporarily setting down his fiddle.

Filled with amateur enthusiasm, a couple of thousand hikers and I rise to our feet from blankets spread on the Malga Canvere grassy plain, 1,975m above sea level in the Italian Dolomites.

We have walked for almost two hours to watch Fraser and cellist Natalie Haas play Gaelic folk music - and now we eagerly attempt to follow the duo's instructions to link fingers and dance with strangers on top of a mountain.

Our clumsy attempts are more funny than flowing, but as hundreds of groups turn (roughly) in time to the reel, overhanging storm clouds hold back their threat of rain over the peaks surrounding us.

Music in the mountains
I'm at the Sound of the Dolomites festival, a summer-long series of music now in its 25th year. A day earlier, I had flown to Verona, then taken a 2.5-hour transfer to the alpine-style village of Canazei in Val di Fassa (Fassa Valley), Trentino, which was one of the host venues.

Earlier that morning, I had taken a cable car to Le Cune, in the Alpe Lusia - a popular skiing resort in the winter and part of the sprawling Dolomiti Superski region. My group had trekked down a red run then followed a well-marked trail for an hour and a half, before spreading our picnic blanket.

But as I'm here in summer, the ski slopes are grassy green or earthy brown, with wildflowers dotted yellow, blue, pink and orange through the verges, and cow bells ringing clearly over the fields.

A herd of stocky, chestnut Haflinger ponies graze, barely registering us as we pass. It sounds idyllic and clichéd. In truth, it is both. Away from the stresses of real life, I understand that relaxation need not involve sunbathing on a white-sand beach; mountain air and scenery have the same effect.

Take a hike
The beauty of visiting the Dolomites in summer is how easy they are for people of all ages to access. Even without the motivation of a music festival, cable cars remove all the strain of struggling uphill, so hikers can set straight off on the network of trails that ribbon across the ridges and summits.

My home for the week was the family-run Hotel Cesa Tyrol, which - like most of Canazei - looks like it has been plucked from the Austrian Tyrol. I can imagine its large rooms, spa and dining hall packed with noisy skiers excitedly planning or recovering from a day on the slopes. But for me, it is blissfully subdued. Aperol spritzes on the terrace as the sun sets behind the hulking Sella group of mountains unwinds my coiled mind still further.

Until 1918, this region of Italy was part of Austria-Hungary, and the influences are seen from the buildings to the menus; one day I tuck into schnitzel and chips, followed by apple strudel. My host, Marta, explains: "We say our mind is Austrian and our heart is Italian. We feel more like mountain people."

And Val di Fassa does have its own people - the Ladins - who speak their own language and are fair-skinned and pale-eyed. They look more Germanic than Italian. Many people who live in the valley work winter and summer seasons, switching from pistes to pedals as the snow falls or melts. 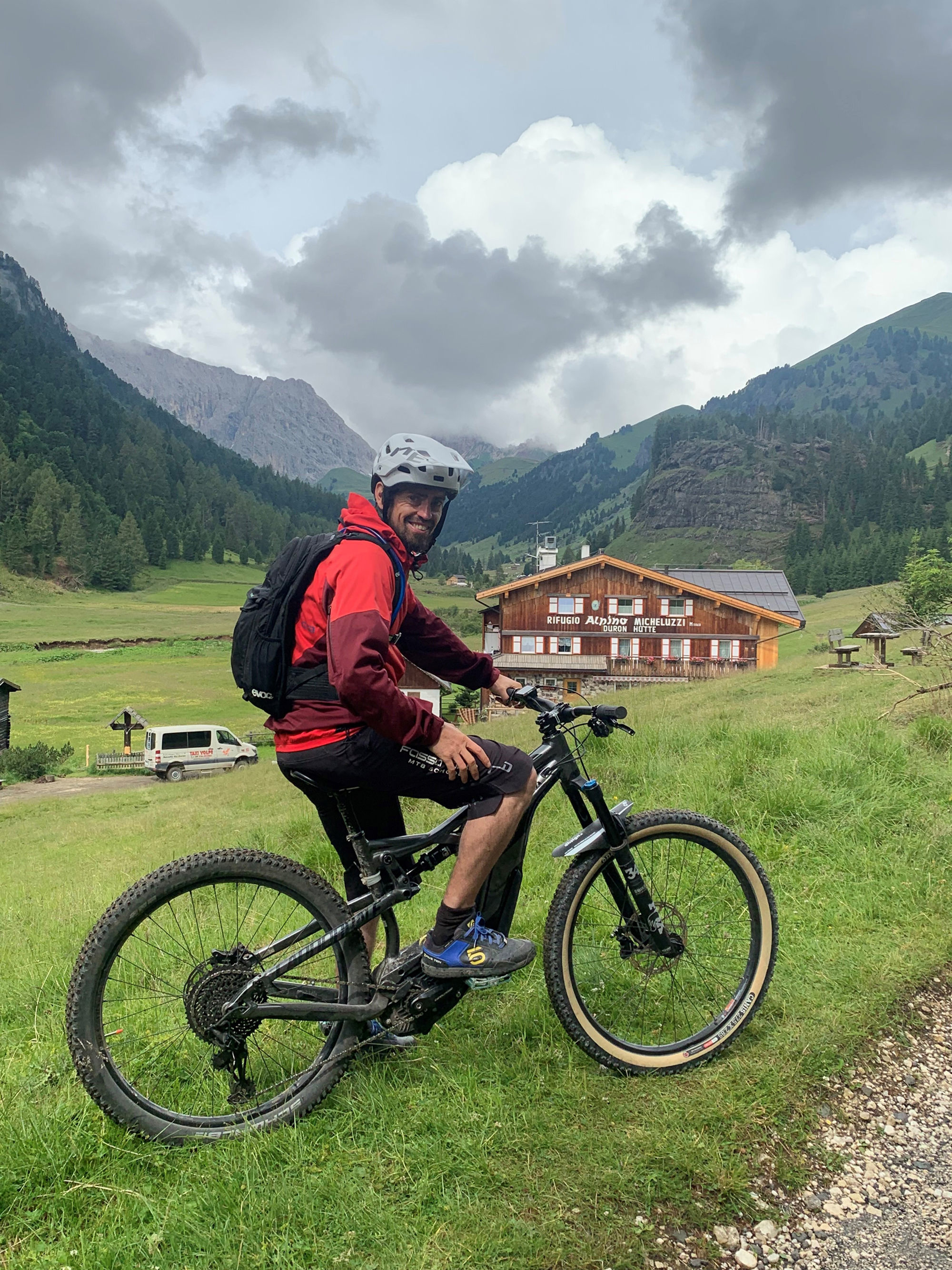 Stefano Davada, from Bikeasy (bikeasy.it) who we meet for an e-bike mountain trail the next day, is one of these; as well as boasting a decade's experience of guiding, he's a freelance graphic designer. He talks us through the settings on the bike's electric battery to help weary legs, starting with Eco (around 50% boost), then Tour (120%) and up to Turbo - a mighty 300% boost of power. This sounds fantastic, but we quickly learn that Turbo would not be welcome when flying downhill on steep gravel tracks in the rain.

Stefano leads us on a 15km cycle from Canazei climbing roughly 850m up to 2,300m to Val Duron, another valley. With a liberal use of Turbo, this isn't anywhere near as arduous as it could be, although a few stops to "admire the view" are still necessary.

Stefano uses these pauses to point out coriander, gentian (used for making local grappa) and strawberries growing wild along the route. He also explains a little more about traditional homes built in Pian, a small hamlet whose few picturesque wooden buildings sell for one million euros or more.

Food for thought
We stop for lunch (and escape the rain) at the family-run Rifugio Micheluzzi, at 1,850m, where only the antipasti platters of cheese and cured meats remind me we are in Italy. Two local cheeses stand out - one red-rinded due to being matured in wine for 18 months, and the sharp yet creamy 'Cher de Fascia' (Heart of Fassa in Ladin). Even the Ladin traditional dish is a type of dumpling.

That evening, we visited the nearby QC Terme Dolomiti spa, which has glorious views of the mountains from its outdoor pools and hot tubs. I spent hours enjoying its themed saunas, relaxation pools and hot/cold sensory experiences. The most memorable of these is a shoulder-deep pool that mimicks being outside in a storm - 'thunder and lightning' crackle as warm 'rain' falls from the ceiling. I slept dreamlessly that night. 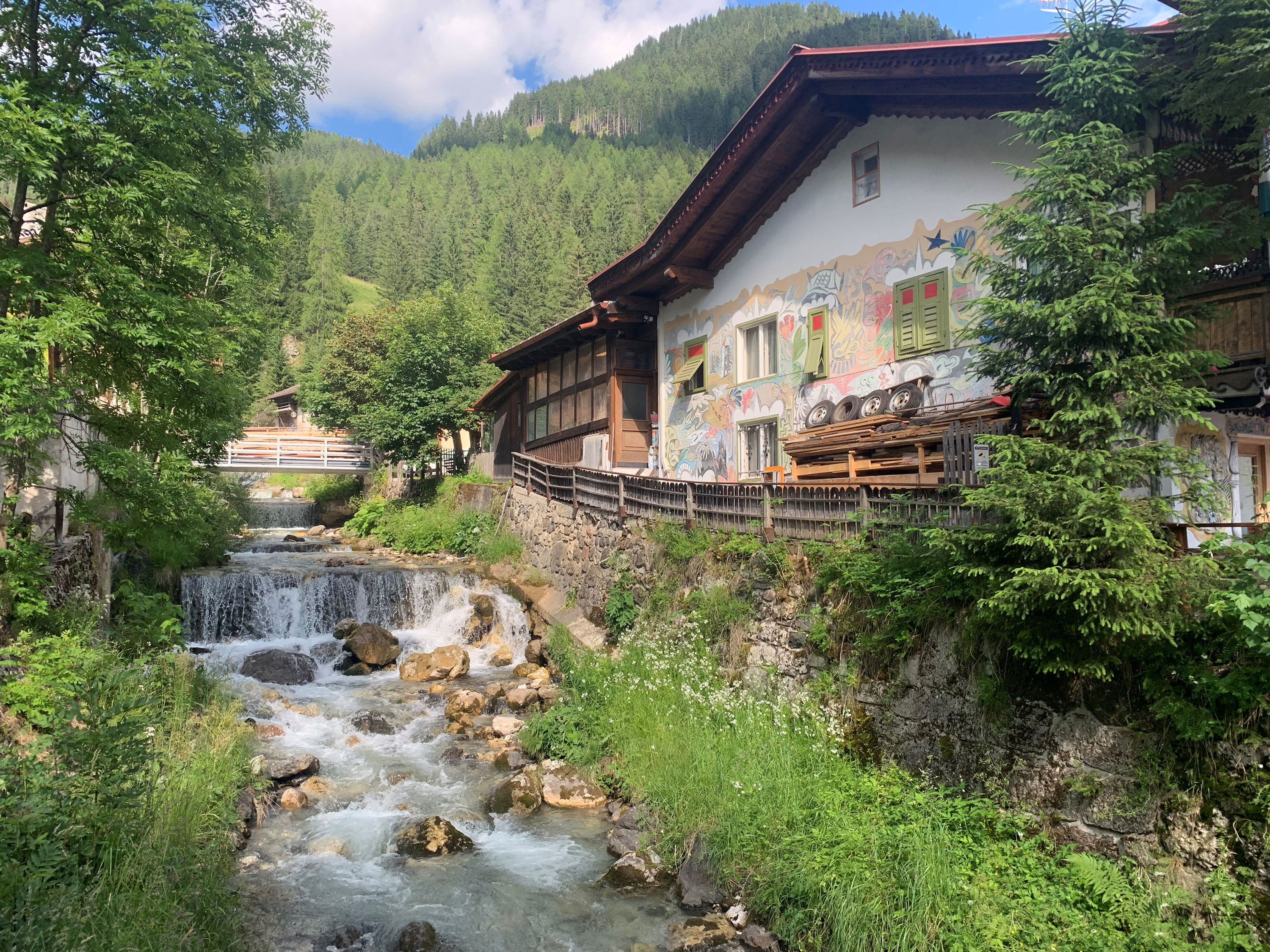 Back on the bikes
On my final day I traded my e-bike for a standard one and cycle along the Avisio River, which eventually reaches Trento, on an asphalted path. The terrain is flat and our guide, Nicolo Cincelli, threads us around young families on two wheels and older hikers carrying poles and backpacks. It is an enjoyable, sunny ride to the Buffaure ski lift, which whisks us up towards the waiting blue skies at 2020m, above Val San Nicolo.

The Lino Pederiva ridge walk stretches for two kilometres before us, directly towards another ski lift and the chalet restaurant Rifugio Ciampac Hutte. While the track is never too narrow, it is single-file only.

When we stopped for antipasti at the summit of a particularly steep climb, those with vertigo in our group have to look anywhere but down, and praise Niccolo for bringing the cheese and speck (a type of ham) up with him.

This awe-inspiring adventure is a summer pleasure, because even off-piste skiers wouldn't get to replicate the journey, as ice and snow would render the path unusable.

Off to the right, Nicolo points out the Salvan range; ahead is the Marmolada glacier and far off to the left is Pordoi, a 2,950m peak that was bisected by tunnels and trenches as Austro-Hungarian and Italian soldiers hunkered down to defend borders in the First World War.

Such an idea seems at odds with the beautiful, arresting landscape - how could the soldiers hope to attack these unassailable mountains?
As I walk along at my own pace, pondering the foolishness of war, I realise that the network of ski runs, hiking paths, via ferrata and bike trails have conquered the Dolomites peacefully - and my wellbeing is much improved because of it.
(PA)