Through The Looking Glass coin released by Royal Mint

The Royal Mint celebrates the launch of it's Through the Looking Glass commemorative £5 crown coin, featuring Tweedledum and Tweedledee, with a limited edition Alice's Adventures in Wonderland cake selection, created in collaboration with EL&N Cafe, London.

A new coin commemorating 150 years since Lewis Carroll’s Through the Looking-Glass has been launched by The Royal Mint.

The £5 crown is based on Sir John Tenniel’s original illustrations of the book, which was the sequel of Alice’s Adventures in Wonderland. 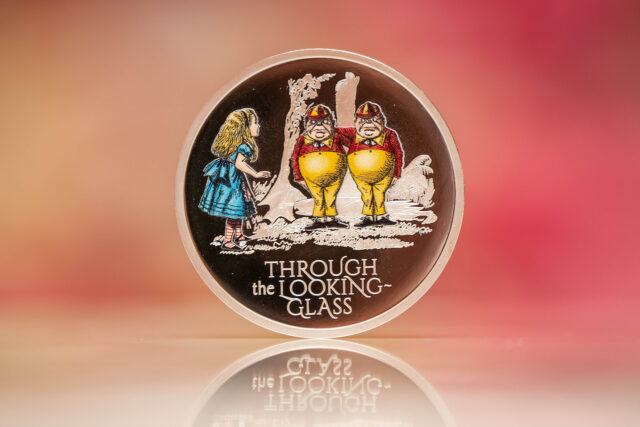 It shows the moment protagonist Alice runs into mischievous characters Tweedledum and Tweedledee.

The Royal Mint collaborated with EL&N Cafe in London to create a limited-edition Alice’s Adventures in Wonderland cake selection to celebrate the new design.

The cake selection includes designs based on the Queen of Hearts from the original book.

It comes after a coin depicting the scene where Alice meets the Cheshire Cat was released last month.

Both coins were created by the mint’s designer Ffion Gwillim and sculptor Emma Noble.

Clare Maclennan, a director at the Royal Mint, said after the last release: “Inspired by Sir John Tenniel’s original illustrations, the beautiful £5 crown has been crafted to the finest quality, combining traditional minting skills with innovation in design technology.

“I’m sure the Alice’s Adventures in Wonderland range will become a popular choice for collectors, capturing the imagination of people of all ages, and to launch at the awe-inspiring Victoria and Albert Museum during the 150th anniversary of Through the Looking-Glass is a fitting celebration.”

Memory Walk remembers those with dementia and Alzheimer's