A cottage hidden in the Nature Reserve has been transformed into an educational centre, featuring a safe area for barbary partridges to lay their eggs.
The Tovey Cottage Natural History Field Centre was previously a residence and the Government scooped it up to create a place where children can learn about Gibraltar’s natural history.
On Tuesday, the Minister for the Environment, Dr John Cortes, officially inaugurated the new Field Centre alongside Upper Rock Managers Reuben Senior and Dylan Sheriff.
Inside the Field Centre, barbary partridge eggs are incubating, nature videos are on show and educational games for children are available.
The Field Centre, located along Queen’s Road near Princess Caroline’s Battery, provides a fun learning space that will be visited by schools in due course. 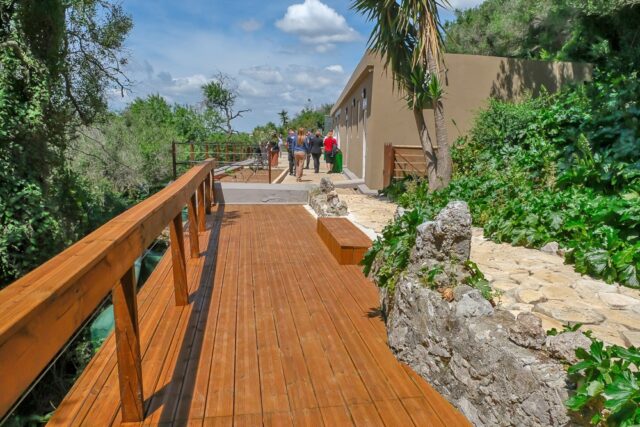 “This is a facility to be used by children and young people to learn about the natural environment and to get to love the natural environment,” Dr Cortes said.
“I remember as a young scout camping in Governor’s lookout and learning all the trails, seeing this cottage and I may have also bumped into it on one or two occasions and thinking what a wonderful resource this would be.”
“When it was vacated a few years ago now, I spoke to the Deputy Chief Minister and I suggested to him that we should convert it into a young people’s centre and he immediately agreed and he passed it onto the Department of the Environment.”
“We have, over a space of three years, so that we could do the things gradually without too much expenditure, converted it into what you see now.” 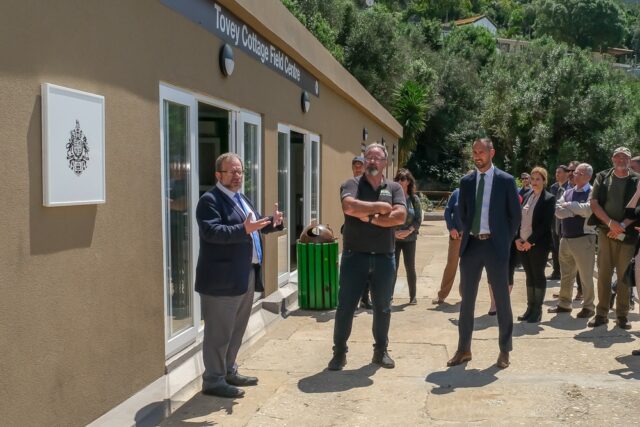 Dr Cortes thanked the Upper Rock Management team as well as the Department of Environment.
“The centre will have various parts to it, it will have the classwork set up with screens projecting different aspects of natural history,” Dr Cortes said.
“Teachers can bring their classes, the Scouts can come and use it, youth clubs can come and use it.”
The facility also includes a bird of prey rehabilitation centre, a pond and an apiary.
The beehives are hidden behind the Field Centre in a bid to keep both the bees and any visitors safe. Inside the hive is a swarm recently found on a traffic sign in Laguna Estate. 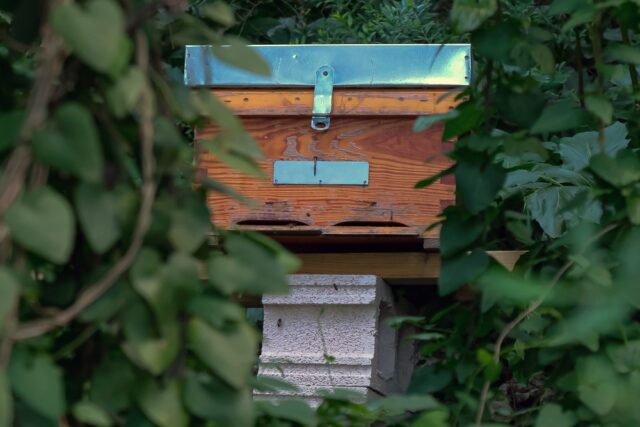 “I think it is going to be a fantastic facility for young people and for the community as a whole, so I’m really, really excited that we have got this together and I want to thank most sincerely all the members of the team,” Dr Cortes said.
He added that without all their hard work the Field Centre would not have happened.
Mr Senior told the Chronicle the cottage had taken months to clear and there was an added difficulty that the cottage was covered in asbestos.
Originally solar panels had been planned for the roof but, due to the asbestos, the roof was left intact and not drilled into. 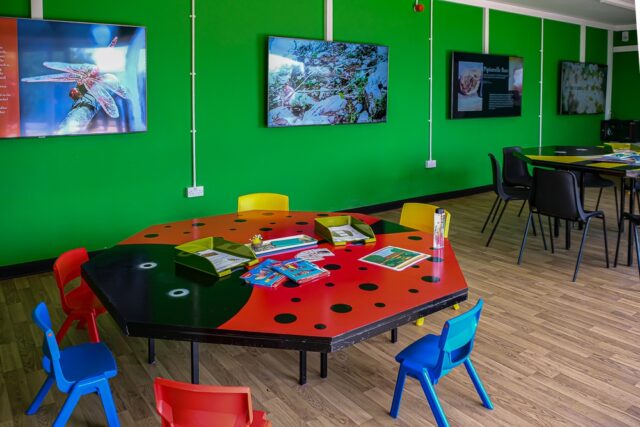 “We left it as a skeleton,” Mr Senior said.
“It was a skeleton of four-by-four wood and we had two corners, one was burnt out and one was rotten through. That had to be all replaced with recycled wood.”
Mr Senior said the team strived to use recycled material as much as possible, and 85% of the material used had been recycled.
He said some of the recycled wood panels had been reused after the refurbishment of a local supermarket.
“I decided to keep it all and use it for the decking, we used 25% of the wood to fix the rotted out areas of the building and the rest for the decking,” Mr Senior said.
Mr Senior said the project took a year and a half to complete and thanked his colleagues, Christian and Arthur Asquez, Matthew Dignam, Jonathan Avellano and Julian Ellul, for their work.
To mark the opening of the new Field Centre, the Head of the Gibraltar Ornithological and Natural History Society (GONHS) Raptor Rescue Unit, Vincent Robba, released a young male sparrowhawk that had sustained an eye injury, GONHS thinks, when it was attacked by local yellow-legged gulls. 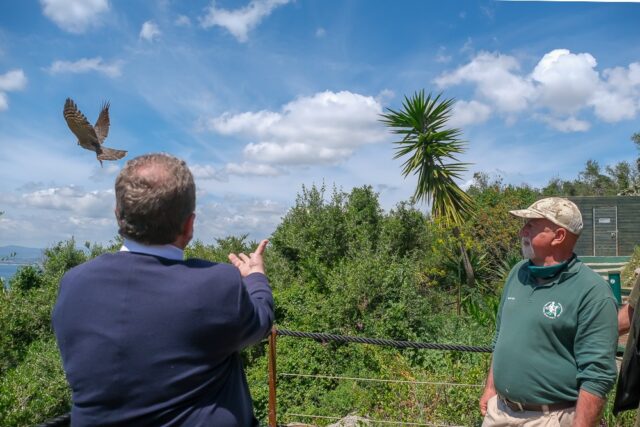 The sparrowhawk has been under the care of the GONHS since March 14 and is now fully recovered.
To keep the bird calm, covers were placed over its eyes while the team prepared to release it. 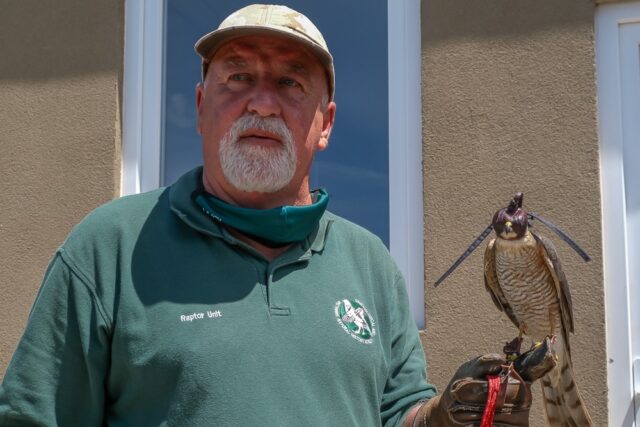 It is hoped the GONHS will be able to use this site to release more rehabilitated birds in the future.
The Field Centre will also be used to help raise awareness on the wealth of biodiversity found in Gibraltar.
Visitors to Tovey Cottage will have the opportunity to learn about different species and habitats found in Gibraltar from within the Reserve, as well as have first-hand experience of the rewilding programme being spearheaded by the Department of the Environment and GONHS. 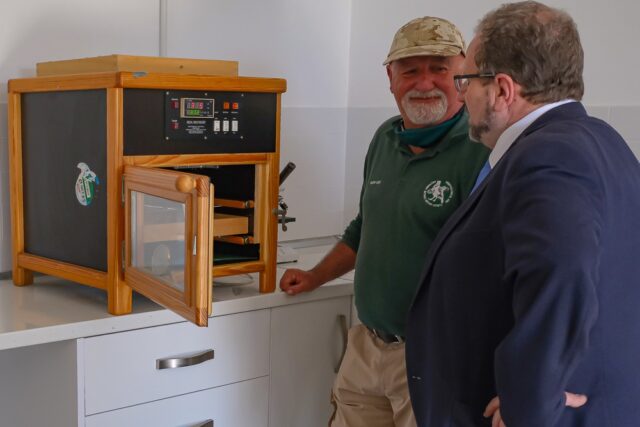 Barbary Partridges, wild rabbits, birds of prey and even reptiles form part of the rewilding programme which will be showcased at the Field Centre in the future.
As Covid-19 restrictions are eased and tourism gradually starts returning to the Reserve, it is hoped that the Tovey Cottage Natural History Field Centre can also be opened up for visitors.
“Gibraltar has long lacked this kind of facility in the heart of the Nature Reserve,” Dr Cortes said.
“I am really pleased that we have been able to provide this, which will encourage children and our people to be in close contact with Nature and learn about the importance of protecting it. I am sure it will be well used.”

WISeKey initiative could be catalyst for regional cross-border tech hub

Rowing Marine back on Rock training for next gruelling challenge