Twelve most wanted fugitives thought to be hiding in Spain named 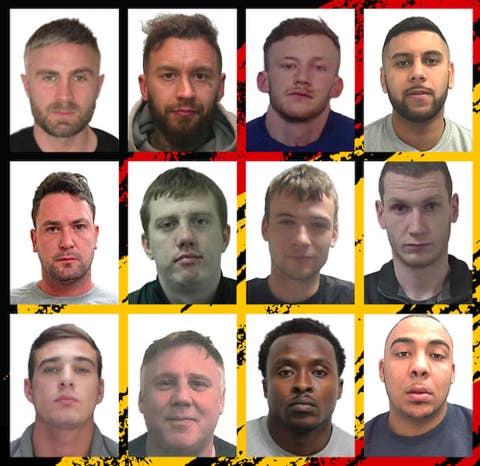 The top 12 most wanted British criminals thought to be hiding in Spain have been named by law enforcement in a bid to flush them out.

A joint campaign involving the UK National Crime Agency (NCA) and Spanish officials was launched in Madrid on Wednesday, where a rogues’ gallery of men wanted for crimes including murder and dealing in guns and drugs was unveiled.

The list of fugitives thought to be hiding in mainland Spain or the Spanish islands includes two wanted murderers accused of killing members of rival criminal gangs.

Nana Oppong, 41, is wanted by Essex Police for the drive-by killing of Robert Powell, 50, who was shot eight times with a 9mm pistol on 13 June 2020, while Callum Halpin, 27, is wanted by Greater Manchester Police for the 2018 murder of rival Luke Graham, 31, in a turf war.

There is also Jack Mayle, 30, from Croydon, south London, who allegedly sold substances including class A drug MDMA via a phone line in south London, called the Flavour Quest, and on the dark web.

When he fled the UK he had a tattooed neck, a diamond tattoo under his left eye and “Croydon” tattooed on the outside of his left forearm.

Mr Rodhouse insisted that Spain “is not a safe haven” for criminals.

He said: “Fugitives usually continue offending while on the run and these men will be known in criminal circles wherever they are.

“The last thing the fugitives’ associates will want is the combined determination and capabilities of the UK and Spanish law enforcement focusing on them.

“Many of these fugitives will be trying to blend in to the large British communities who have made their homes in Spain, and if you are resident, you may know one of them from your town or village.

“Loyalties change over time and we urge anyone with information about these men to help us find them.”

The list also includes two suspected drug dealers from Cardiff who used the secret phone network EncroChat before it was taken down in an international sting.

Asim Naveed, 29, described as muscular and 6ft 2in, is accused of being the leader of a drug smuggling gang that brought 46kg of cocaine, worth nearly £8 million, into Wales between February and June 2020.

His alleged customer Calvin Parris, 32, who has gold upper teeth, is accused of selling cocaine in the Welsh capital.

Another suspect is Scotsman James “Jamie” Stevenson, 56, who is wanted by the National Crime Agency and Police Scotland after the seizure of around one tonne of cocaine at the Port of Dover in September 2020, and 28 million Etizolam “street Valium” tablets in a raid on a suspected pill factory in Kent in June that year.

Stevenson, who is stocky and has a scar on the left side of his face, is also wanted in connection with two suspected arson attacks in Lanarkshire and Forth Valley in May 2020.

Founder of the charity Crimestoppers Lord Ashcroft said: “We know it can be difficult for people to speak up about crime, which is why our charity is here to give you an option.

“We guarantee you’ll stay completely anonymous, just like the millions of people who have trusted our charity with their crime information since we were formed back in the 1980s.

“Please do the right thing by passing on what you know about these fugitives’ whereabouts and help us ensure these criminals are no longer a danger.”

Anyone with information about the fugitives can call Crimestoppers anonymously in the UK on 0800 555 111 or from Spain on 900 926 111, or online at crimestoppers-uk.org/fugitives.