In recent years January has become the month where people try a change to their diets and lifestyle, opting for a vegan approach in what is known as ‘Veganuary’. In this series the Chronicle looks at local families, individuals and colleagues who have taken up the challenge. This is the first of a three-part series, which will run every Monday for the month of January.

The Gaillard family took up the Veganuary challenge in 2020 and never stopped, although with some diet changes in between, they have been vegan since New Year’s Day 2021.

The month of January for many years now has become Veganuary with many people aiming to eat vegan food for the month and with some people not going back to meat and dairy, once such family is the Gaillard family.

“We are animal-lovers and nature-lovers. We went vegan to align our actions with our values,” said Ms Gaillard.

“Noeli didn’t like meat from a young age and asked to stop eating meat in 2019. There was a lot of talk about the impact of industrial farming on the environment that year in the news with a focus on the loss of Amazon rainforest. Whilst looking into it online, we discovered the reality of what happens to animals before meat hits our plates.”

“The rest of us stopped eating meat for Veganuary 2020 and then fish a few months later as the kids were conflicted and pointed out that marine animals are sentient and want to live just as much as land animals.” 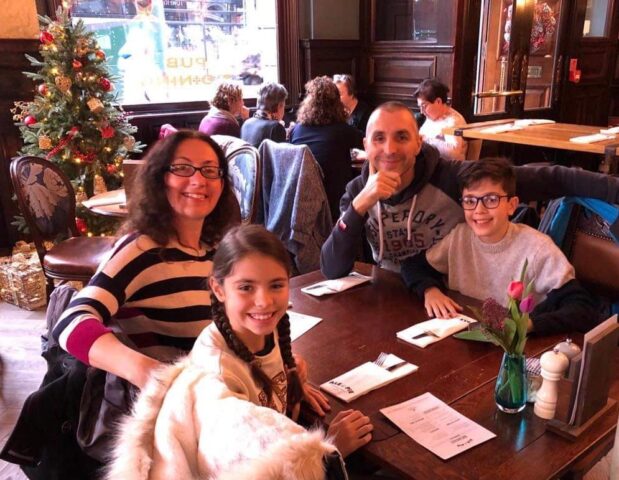 While they gave up meat they continued to eat diary and eggs under the belief it was best for the family’s health.

However, on New Year’s Day 2021 they watched the documentary ‘The Game Changers’ on Netflix prompting them all to say: “That’s it then, we’re going vegan!”

Ms Gaillard told the Chronicle that the transition has been easy for them because it was a decision they all made together. This meant they all ate the same foods and used the same products.

“Also, we are lucky to live in a part of the world where there is an abundance of food and no necessity to consume animal products,” she said.

However, like with most vegans the one thing they miss is cheese.

The family tuck into a wide range of foods from different cuisines, such as lasagne, risotto, shakshuka and curries.

“We make a lot of dips such as guacamole, sundried tomatoes and cashew, edamame and butter beans or hummus. Breakfasts are normally granola, bread with homemade ‘no-tella’ spread or pancakes at the weekend,” she said.

No-tella is the healthy version of hazelnut spread Nutella.

“One of the kids’ favourite dishes is noodles with crispy tofu,” she added.

“Eating at friends or family is different and involves a bit of pre-planning,” she said.

“Staying with family generally ends up with us cooking for everyone unless we just want to eat salad.”

And when it comes to holidays they favour self-catering holidays over all-inclusive options.

“Because, even though there are a lot of dishes to choose from, they often include bacon bits, eggs and tuna as garnish,” she said.

School is also not a problem for the family, with the kids always taking tasty nutritious packed lunches.

They also tuck into homemade snacks such as chocolate and banana muffins or chocolate chips cookies as well as peanut butter sandwiches, fruits or store-bought crackers and biscuits.

It is common for people to feel different after becoming vegan, especially when it comes to feeling healthier.

“The rest of the family has not noticed any changes in their health. As for me, I was stunned that after suffering from inflammations in my shoulders, elbows and hands for 20 years due to computer use, I was pain-free within two weeks of not consuming dairy and eggs,” said Mrs Gaillard.

As the mother of the household and therefore taking at least 50% of the responsibilities she has some advice for anyone or a parent who is trying to introduce veganism into their world.

“Veganuary is a wonderful initiative and a great introduction to veganism. Signing up to the newsletters and emails offers fantastic resources, support and community spirit,” she said.

“However, going cold turkey is not for everyone and we prefer the approach of going step-by-step as your lifestyle permits. It can take a few weeks before using up all the animal products stored in your fridge, freezer and cupboards or, you might not be able to afford the new ingredients essential to a vegan pantry all in one go.”

“Every month can be the start of a vegan life, not just January.”

Speaking directly to a parent she advises that they support their child’s decision and not to discourage them from making a positive change for themselves, the animals and the planet.

“Watch documentaries such as ‘Earthlings’, ‘Forks Over Knives’ and ‘The Milk System’ to better understand why someone might want to become vegan,” she said.

“To anyone who has a family, colleagues and a social life - you will inevitably come across the usual remarks and questions about protein deficiencies, stealing the animals’ food and desert islands.”

“We recommend looking up the social media, books and podcasts of people and organisations like Earthling Ed, Simon Hill, Joey Carbstrong, Peta or Million Dollar Vegan to learn how to best answer those questions.”

“Don’t just be a vegan, be an empowered vegan.”

Finally she recalled reading recently on a Facebook group about a 19 year old vegan who had been eating mainly pizza for three months and was asking for other options.

“Veganism is a lifestyle rather than a diet and nowadays you can be vegan on a diet of nuggets, burgers, pasties and oreos,” she said.

“However, should you wish to navigate your way out of the sea of vegan junk food on offer at the supermarket and eat a healthy plant-based diet, here’s a list of books, websites and apps we have used extensively over the past months, Bosh cooking books and website, Deliciously Ella cooking books and app, Jamie Oliver ‘Veg’ recipe book, Fit Green Mind on Instagram, The Happy Pear on Instagram and the BBC Good Food website.” 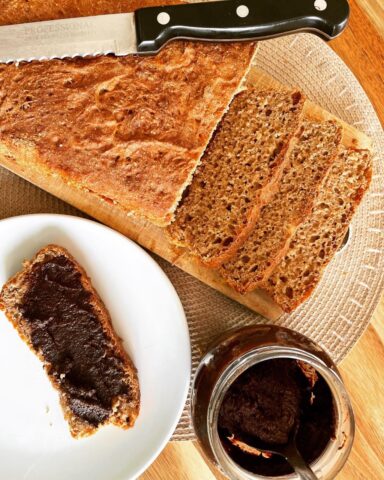 Spelt Loaf
A delicious loaf with a crunchy crust and a soft aerated crumb structure, ready under 90 minutes!
Oven 200c/ Fan 180c
500g Spelt flour (we get ours from Mercadona)
½tsp Salt
1tsp Quick yeast
1tbsp Agave or maple syrup
400ml Warm water
1tbsp Olive oil
1. In a large bowl mix together the flour, salt and quick yeast.
2. Dissolve the agave or maple syrup in the water and roughly mix it into the flour.
3. While the dough is still craggy, add the oil and mix well.
4. This dough is very wet and cannot be kneaded by hand. Work the dough in the bowl for 5 to 10 minutes with a tablespoon or wooden spoon then transfer to a tin.
5. Cover and leave the dough to rise for 30 minutes in a warm place whilst the oven gets to temperature.
6. Bake in the oven for 40 to 45 minutes. 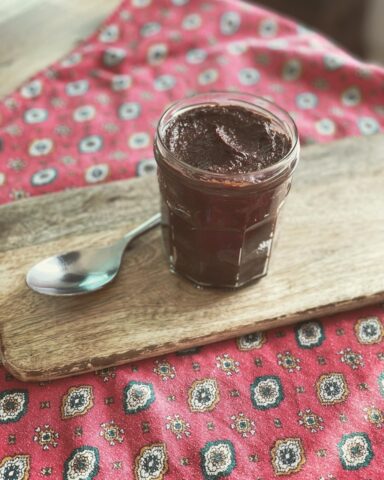 Homemade N*tella
Store-bought plant-based chocolate spreads tend to be pricey – this scrumptious version is a fraction of the price and contains no additives, refined sugar or palm oil!
Makes the equivalent of two jam jars (one is not enough!)
300g Hazelnuts (or 250g hazelnuts and 50g other nuts i.e. almonds or pecan)
150g Dates, pitted
6tbsp Cocoa powder
240ml Plant milk
2tbsp Coconut oil
1. Roast the hazelnuts in a pre-heated oven for 10 minutes at 180c.
2. Once the hazelnuts have cooled down slightly, place them in a food processor and blend until a smooth paste forms (5 to 10 minutes).
3. Add the dates, cacao powder, plant milk, coconut oil and blend again until smooth. Add more milk if you prefer a softer consistency.
4. Spoon into your jar(s) and store in the fridge for up to 2 weeks.