Drone image provided by the Government of Gibraltar.

The Gibraltar Port Authority has confirmed heavy fuel oil has escaped from the cargo ship OS 35, which is beached in Catalan Bay, with tugs deploying booms to collect the oil at sea.

The spill comes after the hull of OS 35 was "crumpled" following a collision with liquefied natural gas carrier Adam LNG in the early hours of Tuesday morning.

The salvage team onboard have identified the source of this leak to two tank vents from the vessel’s bunker tanks, the GPA confirmed.

"All vents had previously been sealed, but the seal of two vents became loose on the crumpling of the vessel," GPA said.

"Divers on scene have been able to re-establish the seals, so the GPA is in the process of stopping the release of oil from the vents."

"The Gibraltar Port Authority J formation and the Salvamento Maritimo Luz de Mar are both downstream from the vessel collecting the free floating oil that has already vented."

"Skimmers are currently being deployed onboard to start collecting what is inside the boom."

"Both the GPA and the Luz de Mar will also deploy sorbent booms."

"The slops barge will be brought alongside the OS 35 shortly to begin to pump out its fuel."

Later this afternoon the Gibraltar Port Authority said it had begun to pump diesel out of the OS 35 and in to the slops barge that has successfully been brought alongside.

"Parallel operations working towards the pumping out of fuel oil are ongoing. Simultaneously, a skimmer has been deployed and is successfully removing the fuel oil that is contained within the boom," the GPA said. 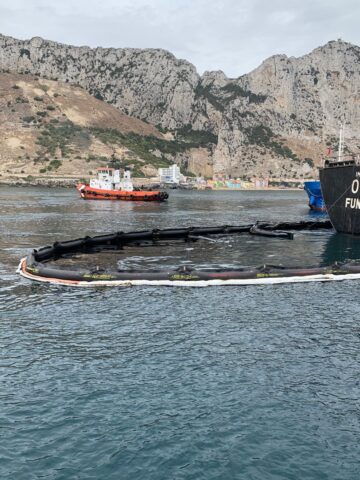 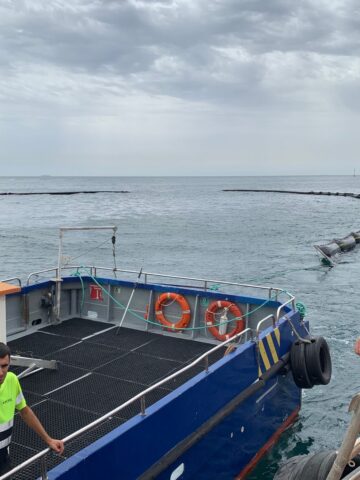 The Government confirmed approx 4,000 litres of a mix of oil and water have been recovered from inside the boom that is alongside the vessel at around 3.20pm.

This post will be updated as further information becomes available.