Gibraltarians Audrey Perez Schembri and Odette Benatar travelled to London over the weekend to pay their respects to the Queen and witness a moment in history.

On Monday, the Queen’s lying in state ended with the coffin travelling across London from Westminster Hall to Windsor.

The day-long ceremony saw thousands line up in a bid to catch a glimpse of the Queen’s funeral cortege and her children and grandchildren, including King Charles III. 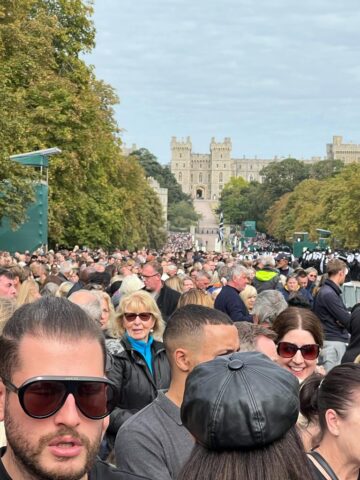 To secure their spot at Long Walk, the pair arrived at 7am, waiting for over eight hours until the procession began at 3.10pm.

“It’s been an unforgettable experience and a wonderful opportunity to pay our last respects to this remarkable woman,” Mrs Perez Schembri told the Chronicle.

As the Queen’s coffin passed by, mourners threw flowers at the hearse.

After the funeral the Queen was laid to rest in a private ceremony in King George VI Memorial Chapel at Windsor Castle.