The “beginning to the end of the Covid-19 nightmare” will commence at 8am Sunday morning following the arrival of approximately 7,000 doses of the Pfizer/BioNTech vaccine on a military aircraft on Saturday evening.

The highly anticipated arrival was followed by many across the Rock on flight-tracking software, and by officials and dignitaries who were present on the airfield apron and in the basement of St Bernard’s Hospital where the vaccines will be kept in freezers under high surveillance.

The Governor, Vice Admiral Sir David Steel, and Chief Minister Fabian Picardo were at the airfield to see the A400 land in unpleasant weather conditions.

The vaccines were carefully unloaded by members of the Ministry of Defence who then transported them to the hospital under police escort provided by the Royal Gibraltar Police. 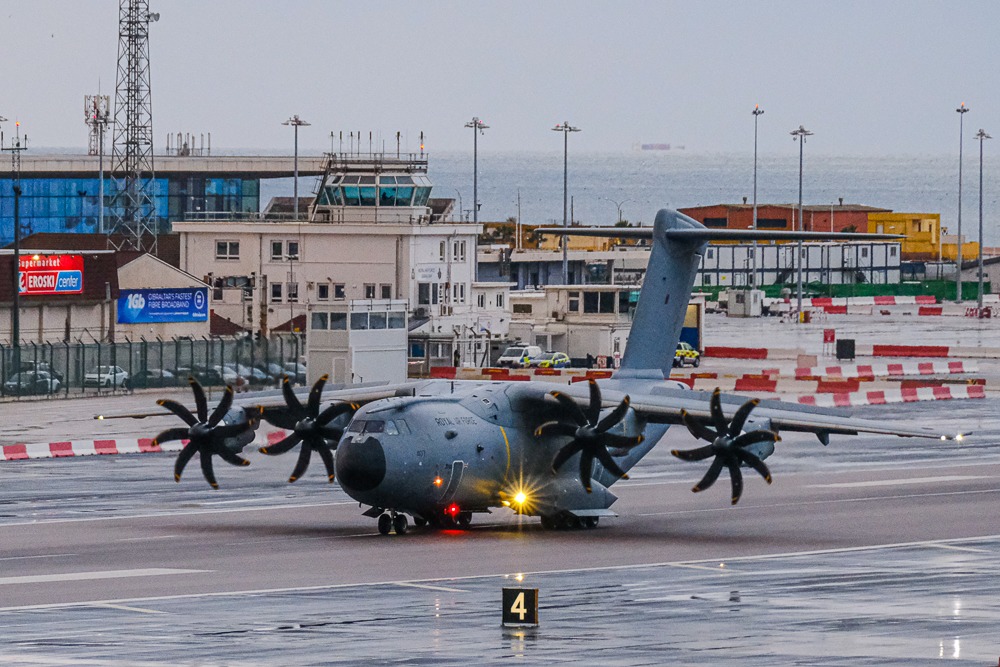 After reversing into the basement and under the gaze of dozens of eyes, the back door of the van was opened and everyone had their first look at the precious white boxes.

Once unloaded from the van they were carefully carried to the storeroom where they will be stored at the correct temperature of minus 70 degrees Celsius in a highly sophisticated freezer purposefully purchased by the GHA for the vaccines.

Acting Medical Director Krishna Rawal will be the first person to receive the vaccine at 8am Sunday morning and said he is looking forward to it.

“I am over the moon, really, really pleased,” he told the Chronicle about the arrival of the Pfizer Covid-19 vaccine.

“It has been a long, long, long journey and this is the light at the end of the tunnel which has just been switched on bright now.”

“It’s not just the months since February last year but even in the last few days and weeks since we knew the vaccine was coming and the preparation that has been involved and everyone coming together.”

He recalled having conversations with his teams who were working hard to keep the hospital going and he said to them: “This is it, this is our exit strategy. This is the moment we have been wishing for since last March.” 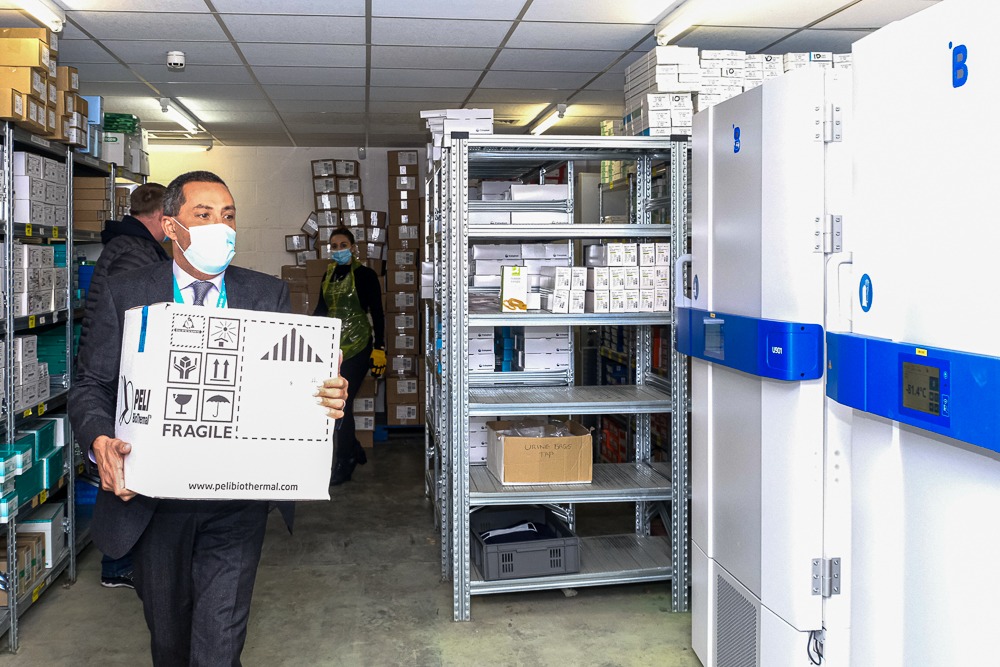 Dr Rawal said the weather had added extra stress to the operation, noting that because the vaccines were so desperately awaited, he could not help but concentrate on all the little things that might go wrong.

Even to the point of worrying about which aircraft could come and if that aircraft would vibrate too much for the vaccine, which is very delicate.

He described the journey of the vaccines to the Rock as a “massive rollercoaster”.

“Just the fact that it is in the freezer is enough. I know my teams will take care of it tomorrow morning and I will be up with them in the morning but just that it is here and it is safe that’s enough for tonight,” he said.

Dr Sohail Bhatti, the Director of Public Health, called the arrival of the vaccines “the beginning of the end of the nightmare that we have had for the last year”.

“If we can get 90% of the people that we need to get vaccinated this time round then I do think that Government will have the option to not just relieve the lockdown but restore a huge amount of normality to our life,” he said.

He explained that it takes two weeks from the vaccine administration of the first dose to get any significant immunity.

“We will and we plan to give a second dose after three weeks. it very much depends on the supply that the UK Government is giving us,” he said.

The vaccine is coming only from one source which is the UK Government and the batch that arrived on Saturday is seen as a “trial run”.

“To see if we can manage it, we don’t waste it, we make the best use of the vaccine and if we can, then I believe there is more due in the last week of January.”

“Then every two weeks after that we will get some more.” 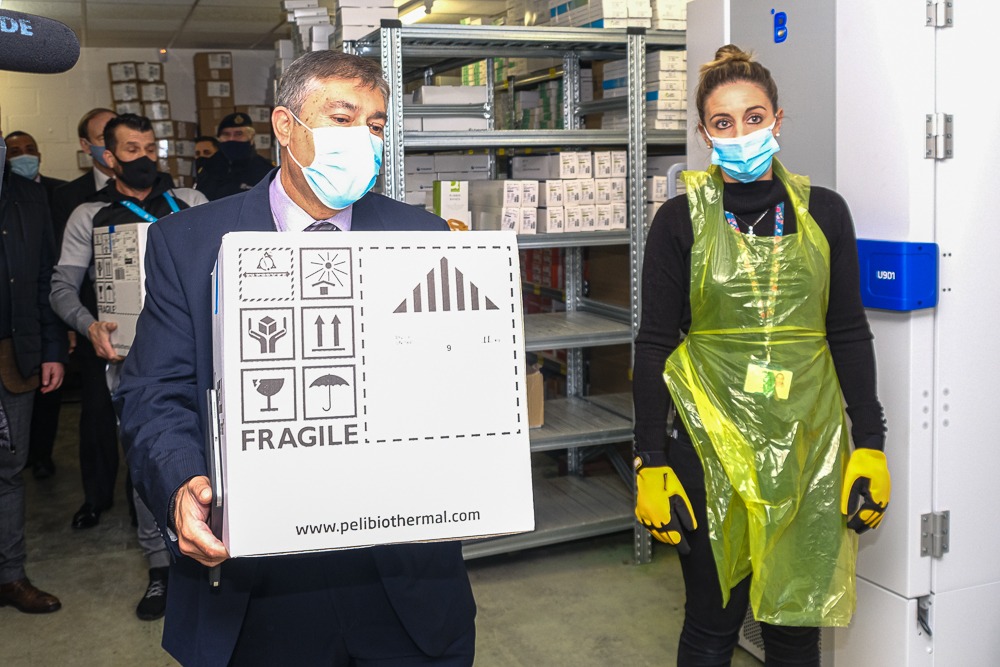 He explained that the positive aspect of the Pfizer vaccine is that nearly everyone can receive it apart from pregnant people, who are urged to get advice from their consultant, and people with multiple, severe allergies.

He noted that there is concern from some members of the public that they will not receive the vaccine.

“We will be vaccinating children but only children with neuro deficits or who are seriously ill,” he said.

“But children under the age of 16 won’t need the vaccine and everyone above that we hope to get done fairly quickly.”

How quickly people are vaccinated depends on the supply chain from the UK.

“As much as I would like to say the sooner the better, its unfortunately not all in our own hands. What is in our hands is to deliver a good vaccination service and the vaccination centre at the old PCC looks like it will deliver a significant amount of activity so we will use the 7,000 doses very quickly,” he said.

It is hoped that the first four groups who are in the priority risk group list will be vaccinated.

On people who are concerned about the vaccine and are reluctant or will not take it, Dr Bhatti said: “All I know is that we have had a year of fear and this is a way out of fear.”

“I am going to be taking the vaccine tomorrow [Sunday], and I will be encouraging my in-laws and everyone else to have it.”

“So if I believe it not to be safe, I would not be recommending it to my relatives and my loved ones,” he added. 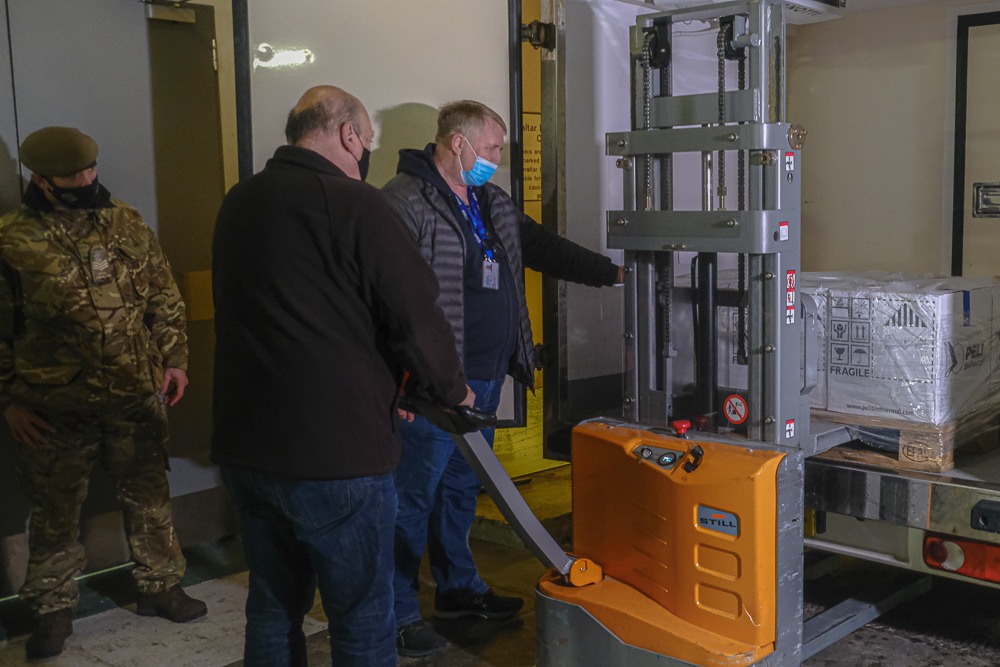 Having followed the flight departing from Brize Norton in the UK as well as receiving updates on its journey, the Chief Minister said he will sleep well tonight knowing they are safely on the Rock.

“It is remarkable how in a developed country like Gibraltar and all around the world all of us are expecting the arrival of this chemical compound which is going to enable us to turn the corner, the beginning of the end of the crisis that the whole world has faced with coronavirus,” Mr Picardo said.

“I think for most people it is a day of hope, of expectation, of really seeing the light at the end of the tunnel and people have never watched with such expectation to see a Royal Air Force A400 land at Gibraltar as the whole of the community has today.”

“For us this is really something that we could not have accessed without the United Kingdom, without the Foreign Commonwealth Office and now without the Ministry of Defence assisting us.”

“All of that British family coming together and helping Gibraltar,” he added.

On the first vaccination on Sunday morning he said: “I am looking forward to it happening whilst I hope tomorrow at last to be sleeping like a baby.” 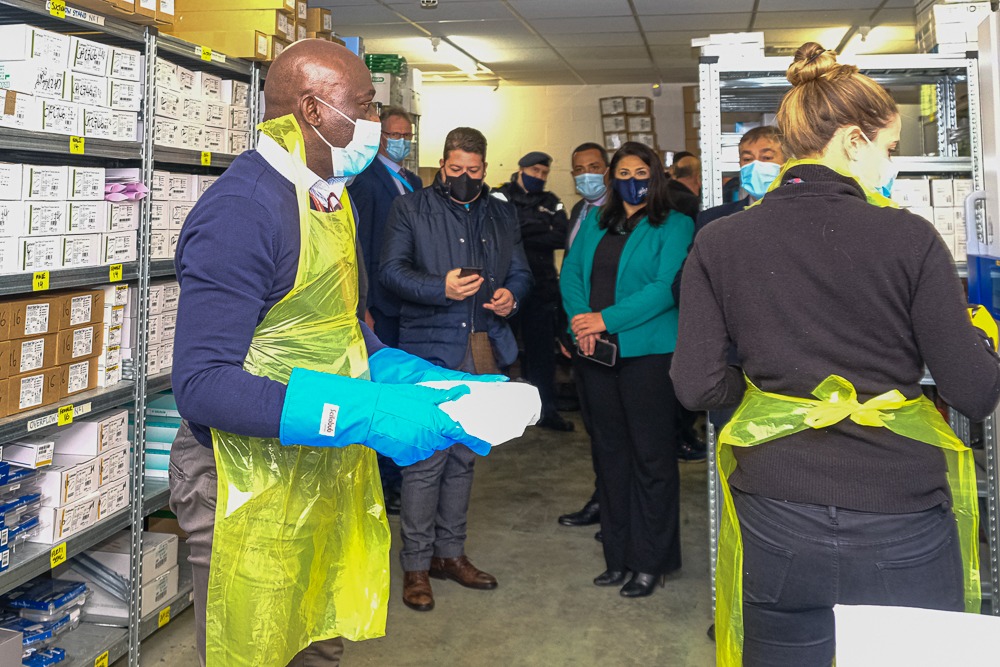 The Governor, Sir David Steel, remarked that the event was brilliant and that the coming together of so many plans and preparations for this “big day” was significant.

“I just heard the Chief Minister say and he is absolutely right it is the British family working together to make sure we are all alright and this is the beginning of the end of Covid in Gibraltar,” he said.

“So I am ecstatic. It is one of those days that you will always remember in your life.”

“When those boxes came off that aircraft I realised that in one of those boxes was a bit of liquid that was going to save somebody’s life and I think that is the most important thing about today.”

“Today is the start of the end of Covid in Gibraltar and to me that is a great relief,” he added.

The Minister for Health and for Civil Contingencies, Samantha Sacramento, also watched as the boxes were unloaded and spoke to the Chronicle about her relief now that they were secure in the freezers of St Bernard’s Hospital.

“A lot of people have been working very hard to get the logistics right to get the vaccines here. The fact that they are now here is a tremendous relief and it means we are now starting on the first phase of our plan,” she said.

She thinks that there has already been some sense of relief from the general public as well as frontline workers since the Government and the GHA started announcing that the Pfizer/BioNTech vaccines would be coming to Gibraltar.

“Everybody in the GHA has been arranging appointments for people who are members of the public who we are starting to vaccinate as of Monday morning. So those calls have been received very well,” she said.

“And I think that everybody has been on the lookout for the flight to land today. Everyone has been really looking forward to this moment I think with just that expectation that this is now where we start our programme in earnest.”

The Director of Public Health, Dr Sohail Bhatti said he is aware that some people in Gibraltar are awaiting the Oxford/AstraZeneca Covid-19 vaccine.

“While it is not 100 percent certain I believe the UK Government will want to give the vaccine first to places like the Falklands where they just can’t manage minus 70 transport,” he said.

“Pitcairn, the Falklands, Ascension, it is really logistically very hard so the best thing they can do is get that particular variety and it is not because of any conspiracy theory or anything.”