Water expected to return this weekend, as AquaGib grapples with supply

Across Gibraltar, local residents were left with dry taps, as AquaGib grappled to supply water in bowsers and divert new pipes to their reverse osmosis water plant damaged in a fire.

The tunnel fire, while under control, has yet to be fully extinguished, resulting in water disconnected every evening between 12.30am and 7am while emergency work is carried out to repair water pipes damaged by a collapse in Power’s Drive Tunnel.

Deputy Chief Minister Dr Joseph Garcia, and Minister for Civil Contingencies Samantha Sacramento, outlined how water is expected to return within the next 48 hours, once works are completed, despite the Gibraltar Government originally advising that repair works would take approximately five days.

While senior officials briefed the press, queues formed on the sides of roads around Gibraltar with staff at AquaGib handing out bottles of water to affected residents.

Dr Garcia described how the reservoirs are held within the tunnel in Beefsteak Magazine which picks up water from Little Bay, the water is transferred by pipe along Power's Drive to Governor's Cottage and the AquaGib Reserve Osmosis plant where the water is desalinated. 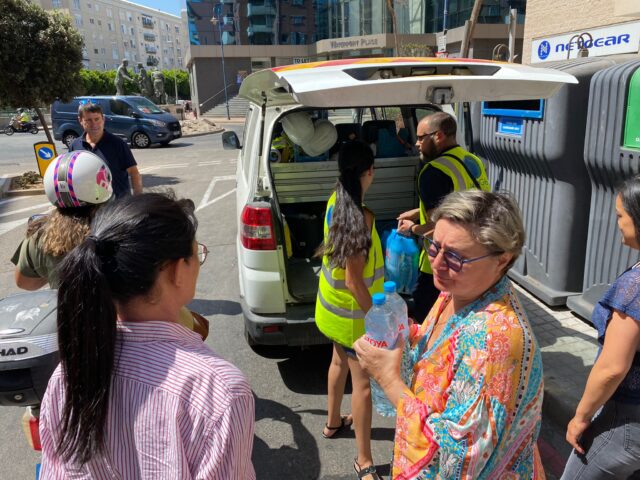 The fire was within that tunnel system which includes vaults used for storage.

The flooring for the Gibraltar Music Festival in vault four caught fire, and this led to the collapse of the roof of the corridor, which is the size of a dual carriageway, and through which the pipes to AquaGib’s plant run.
AquaGib is working to replace the pipe to Beefsteak magazine with an external pipe which will the connect to Governor's Cottage, making the Power's Drive corridor "redundant.”

"The expectation is that will be completed within 48 hours," Dr Garcia said.

He added: "Fingers crossed, it will happen as soon as possible."

"There are millions of litres of water in the system," he said.

"The problem is, you need more millions of [litres of] water on top of that to push it down through the different pipes."

Once the diverted pipe is in place, Dr Garcia said, the reverse osmosis plant should be working once again.

The North Mole plant is producing 1.5million litres of water a day, with only one pump.

"That plant has been used primarily for the hospital," Dr Garcia said. 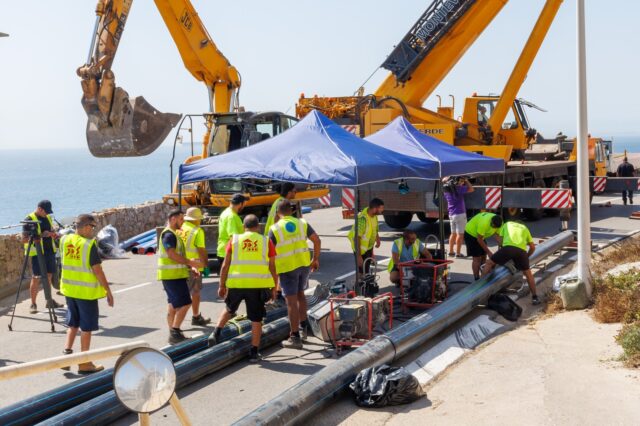 He added restrictions will continue until the system is back up and running but, critically, water supply has been preserved for St Bernard's Hospitals and Elderly Residential Services.

Some 80 owners of swimming pools have also been flagged as high users of water and contacted to restrict consumption.
Ms Sacramento added that water was not cut off in areas across Gibraltar on Thursday afternoon but, rather, the lack of water pressure saw residents’ taps run dry.

She called on the public to use water sparingly for the next couple days.

Ms Sacramento added she hopes the pipe should be working again on Saturday.

Arrangements have been made to bring water from Spain which will aid supply, and further arrangements will be made next week to catch up on reserves. 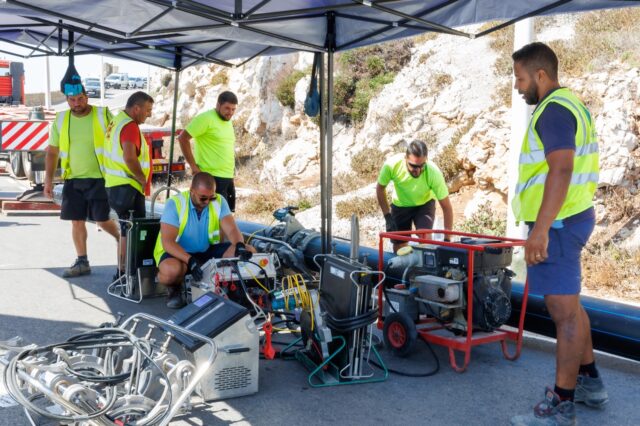 The Spanish authorities have kept the Customs channels open for a continuous supply of water, and the Government is looking at bringing water by sea from Algeciras.

AquaGib has also advised that they have opened a helpline for the elderly and vulnerable, advising those unable to access water to call 20073659.