Youngster sets out to conquer fear of heights, raising funds for children in Kenya

Dr Meenal Viz, Radhika and Shivana preparing for the challenge

After spending her last birthday in lockdown, nine-year old Shivana Tulsidas Gulraj wanted to mark her 10th birthday by doing something to help and inspire others.

But little did she know that a Facebook message to someone who has inspired her, Dr Meenal Viz, would set her on a journey that will see her climb the Med Steps this Sunday.

Shivana has a debilitating fear of heights but with much encouragement decided to take on this mammoth challenge together with her role model, Dr Viz and baby Radhika, while also fundraising with a goal to raise £10,000 for a new children’s home in Kenya.

The pair have been unstoppable since meeting less than two weeks ago, and training and preparation is underway as they prepare for the challenge.

“I was learning about inspirational people in RE and my parents told me about Meenal, and I found her story really inspiring,” Shivana told the Chronicle.

“I learnt that she also started fundraising at a very young age and I thought I could do that too.”

“I also wanted to make a difference in the world and I found her so inspiring.”

“I am hoping other children can also see that they can make a difference in the world.”

She began searching for fundraising ideas to challenge herself, and even explored donating her blood which she was quickly talked out of by her parents. 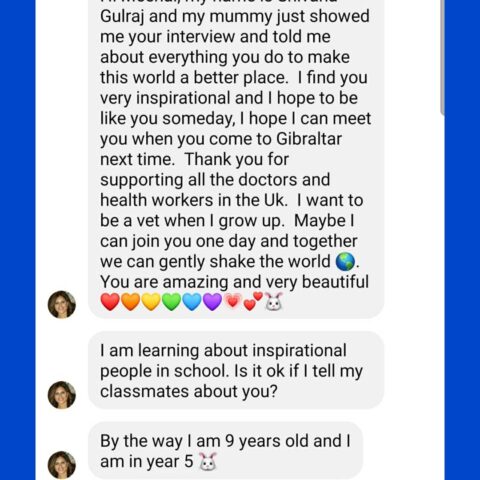 After watching Dr Viz and her family on a GBC viewpoint episode, Shivana reached out to her on Facebook telling her how she had inspired her and how she wanted to become a vet herself.

Luck was on Shivana’s side as Dr Viz is currently in Gibraltar with her family and working with the Gibraltar Health Authority.

They agreed on helping Shivana overcome her fear of heights, and began training for the Med Steps challenge, first by running to build up her stamina and also climbing one hill further each training session to give her time to get used to the height.

“Meenal has been telling me to look over to help me get used to the height.”

“I am looking forward to making it up to the top and seeing Gibraltar from that view, because I only really see the Rock from my bedroom window.”

“I know we set £10,000 goal and that is a very big amount, but if every person puts a little bit we can reach that amount.”

The money raised will go towards the Alt Cricket Foundation, a charity founded by Dr Viz when she was studying medicine at university.

The charity aims to provide education and clean water for children aged between four and 15 who have lost their parents to HIV/AIDS.

The next stop in helping these children break free from the poverty cycle is to provide them with a home so that every child reaches their full potential.

Shivana training with her sister, Krsna

Shivana’s has already raised more than £9,000 for the charity, and with less than a week to go this is the last push before her Med Steps challenge.

Dr Viz told the Chronicle: “Throughout my own journey over the past year, I have been using a quote from Mahatma Ghandi where he said ‘gently we will shake the world.”

“In her message, Shivana asked if we could gently shake the world together and that really made me realise the impact we can have.”

“Shivana is a very gentle girl, a very kind girl, and I want her to see the difference she can make and the magnitude of her strength.”

“This challenge, apart from fundraising for the children in Kenya, I hope it shows children, not just Shivana, that if you put your mind to something you can achieve it.”

“I am passing that baton on to Shivana, and I hope that one day she can pass it on to my daughter, Radhika.”

Dr Viz and Shivana have begun a social media campaign, posting videos and their fundraising amount for people to see, something which has captured the attention of people from all over the world.

Dr Viz is in Gibraltar and working with the Gibraltar Health Authority in working towards a “post pandemic future”, to help “regain the trust between the public, the Government and healthcare workers”.

“You also have the level of doctors. From my perspective we are working towards what we saw prior to the pandemic.”

“We focused not just on Covid patients and leave everyone else behind, but work towards healthcare for all.”

“It’s an honour to be back and serve the community I grew up in.”

“It is being back in Gibraltar and seeing how many people not only follow me but also encourage me in the work that I am doing.” 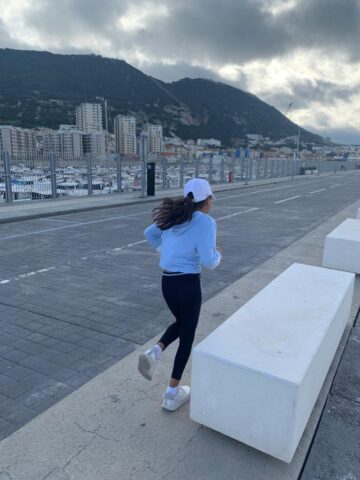 Training for the big day

Together with her husband, Dr Nishant Joshi, the couple are also involved in Team Halo, a worldwide initiative to encourage the take up of vaccines and help put an end to the Covid-19 pandemic.

Dr Viz made headlines across the world last year when she protested outside Downing Street with a sign demanding more PPE for healthcare workers.

At the time she was working while pregnant with Covid-19 patients and became the voice who needed the most protection.

Dr Viz and Dr Joshi, took legal action against the UK Government over the lack of appropriate PPE and won the judicial review.

As more time passed, more issues came to light such as how ethnic minority groups were worst affected by the virus and WHO’s guidelines were not standardised in the UK.

As a result of the judicial review, any healthcare worker from an ethnic minority group will have a risk assessment done before entering a place which is affected by Covid, and strict guidelines are in place for PPE equipment which prohibits its reuse.

She was recognised for her role in this and featured on the cover of British Vogue last summer, shortly after the birth of her baby, Radhika.

To donate and help Shivana reach her target, visit https://www.crowdfunder.co.uk/kenya-childrens-home.