130 years on, the Utopia tragedy remembered

The 130th anniversary of the shipwreck of the SS Utopia in the Bay of Gibraltar will be marked today with an online seminar that seeks to ensure the memory of this tragic incident is kept alive.

The seminar will bring together public authorities, academics, journalists, researchers and students in Italy and Gibraltar to mark the anniversary and remember those who were lost in the disaster.

It will also reflect on the efforts of rescuers who plucked survivors from the sea, and of a community that offered them shelter and warmth during the aftermath.

The SS Utopia, a 2,371-tonne transatlantic steamship, sank in the Bay of Gibraltar after colliding with the Royal Navy warship HMS Anson during a south westerly gale at around 7pm on March 17, 1891.

The steamship was sailing from Naples to New York carrying 880 people, most of them Italians who were emigrating to the US.

Out of those passengers, there were just 318 survivors. The remaining 562 passengers and crew of the Utopia were dead or missing.

“The tragic story of the sinking of the Utopia will forever be tied to our own story,” said Patrick Canessa, the Honorary Consul of Italy in Gibraltar.

“Not just because it sank in our waters but also because it was our people, our fathers and our grandfathers, who went out into the bay that treacherous evening, putting their own lives at risk, to help save lives.”

On that tragic night 130 years ago, the Utopia sailed into the bay in rough weather and was unable to avoid a collision with the Royal Navy warship, which was anchored off the port.

An investigation later put the collision down to “a grave error of judgement” by the Utopia’s captain, John McKeague, exacerbated by the strong wind and rough seas.

The collision pierced the Utopia’s hull, tearing a five-metre hole below the waterline.

As the vessel sank in the bay, efforts were focused on rescuing those on board and boats were deployed from ships in the bay and from shore.

But weather conditions were bad and the stern of the Utopia rapidly filled with water.

Within 30 minutes, the ship’s bow was also beneath the waves, sweeping men, women and children into the sea.

A vivid account of the disaster was carried in the Gibraltar Chronicle the following day and filled almost an entire page of text.

“During this half hour all those on board who had succeeded in reaching the deck crowded into the bows, where they could be plainly seen from the Rock clinging to the bulwarks, the sides of the ship, the rigging, anywhere and everywhere, until at last this portion of the vessel also sank, carrying with it many who had there taken a last refuge,” the report in the Chronicle said.

“The scene was truly appalling.”

“Even from the Line Wall, where the cries of distress from the panic stricken passengers could be distinctly heard, the horrors of the situation could in some measure be realised.”

“The electric lights of Her Majesty’s ships Anson and Rodney cast a vivid light on the sinking vessel and on the numerous launches and boats on her lee side which were plainly visible.”

“The passengers, &c., were huddled together in hundreds, and in many places entirely hid from view portions of the bows upon which they crowded; they were all in motion, striving every man to save himself or his family, and it was evident that the most intense excitement and awful struggle for life prevailed.”

The report in the newspaper praised the efforts of rescuers both from the Royal Navy fleet, from other ships in the bay and from the Port of Gibraltar, whose personnel braved the stormy conditions to save life. Two of them lost their lives. 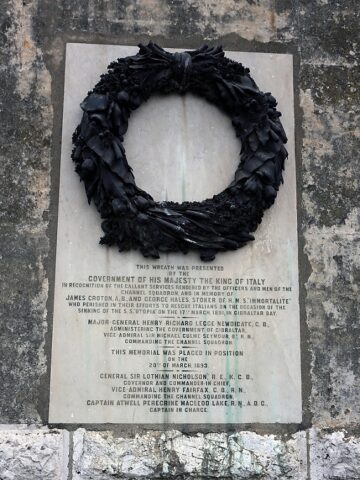 “They seem one and all to have vied with each other in the work of rescue, and if today we deplore and mourn the fearful loss of life which last night occurred in our bay, we have at any rate the satisfaction of knowing that all that could be done by our fleet and by those on shore was done to minimise this fearful catastrophe,” the report said.

The proximity of the vessel to shore meant many people watched it unfold, an indelible image on this community’s collective memory.

In the days that followed, one eyewitness told this newspaper: “The shrieks and cries were heartrending and the awful sight of eight or nine hundred panic stricken people struggling for their lives was one which can never be forgotten by those who had the misfortune to witness it.”

The shipwreck also brought the community together in a spirit of charity that remains immediately recognisable today.
The very next day after the Utopia sank, the Chronicle carried an appeal for clothing for the survivors.

It was the start of a community-wide response that would continue in the days and weeks following the collision, including a special fund that was set up to collect donations for the survivors.

There were charitable events too, the proceeds of which were also donated to the fund.

On March 24, the Chronicle carried a report on a well-attended performance in the Benatar Theatre by the Caracciolo Company held for the benefit of survivors of the Utopia.

The report notes that the disaster had cast “a gloom” over Gibraltar and that no one was in the mood for the opera. But the community rallied round in a collective show of support.

The reports in this newspaper – almost daily through to August of that year – reflected that shared grief at this terrible disaster and Gibraltar’s desire to help in whatever way possible.

Later, the Italian Government awarded decorations for bravery to servicemen and civilians who were involved in the rescue operations. 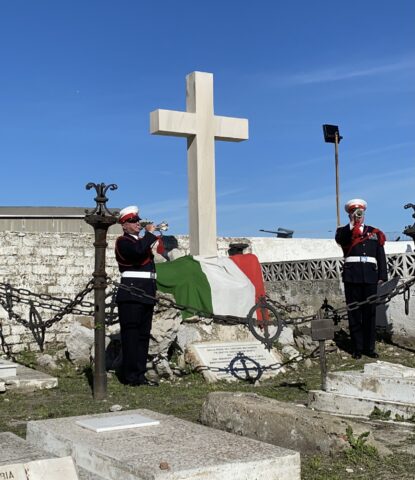 In Gibraltar this week, the 130th anniversary of the loss of the Utopia has been marked by buglers of the Gibraltar Band and Drums Association, who played ‘Il Silenzio’ at the memorial in North Front cemetery.

Members of the association have also volunteered to refurbish the memorial in the months to come.

The online seminar today has been organised by Pina Mafodda, an Italian researcher and author of historical texts, who will present her research: ‘March 17, 1891, the shipwreck of Utopia between news and stories. Giving voice and dignity to those who have left their roots, their land to seek a better life in search of a dream.’

The research will be published by Volturnia Edizioni in the Molisani Studies Series, starting from summer 2021.

The seminar starts at 1.30pm and can be viewed on Zona Rossa WebTV’s YouTube channel.

Eight clever tips to save you money when shopping online