Gibraltar’s swimmers continued to add to the list of Gibraltar national records broken at the Birmingham 2022 Commonwealth Games with the men’s 200m freestyle relay record broken on Monday.
A team of Matt Savitz, Jordan Gonzalez, Aidan Carroll and John Paul Balloqui set a new record with an 8:08.83 time in the finals.
The Gibraltar team faced stiff competition with Australia, England and Scotland taking the medals on the night.
Wales, Canada, South Africa and the Isle of Man also competing.
Gibraltar facing some of the top swimmers for this distance went out to once again break their own record knowing that there was little chance of medals due to the field they were competing against.
Entering the race with an 8:15.75 qualifying time Gibraltar’s swimmers although lagging behind from the start maintained a 1:03.87 gap throughout.
Australia, the eventual winners, recorded a games record with a 7:04.96 time closely followed in by England with a 7:007.50 and Scotland with 7:09.33.
Wales, with a 7:10.64, narrowly missed out on the medals.
Jordan Gonzalez and Aidan Carroll will be back in action this Tuesday morning in the men’s 50m freestyle heats where they will be looking to try and break further national records.
This Tuesday also sees athlete Craig Gill take to the track on the men’s 100m. 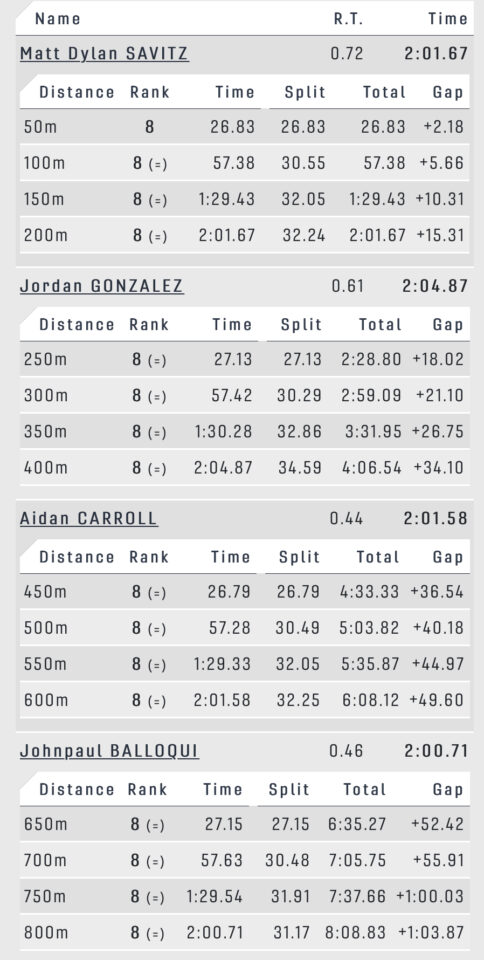