An MOD employee has received a Service Award in recognition of his 50 years’ service.

Command British Forces Gibraltar (CBF) Commodore Tim Henry presented Joseph Wink with a certificate to recognise his 50 years of meritorious service to the MOD, on July 4. 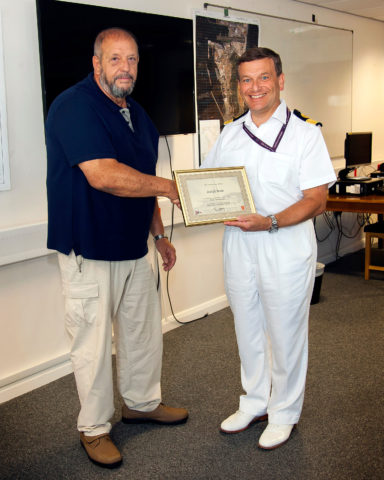 Also attending the presentation were family members and colleagues who had worked with Mr Wink during his career.

His friends and colleagues have described Mr Wink as a loyal, dedicated and utterly reliable worker. His self-motivation and desire to complete every job he undertakes to the best of his ability has been the hallmark of his career.

During his 50 years of service he has witnessed much change and has always reacted positively, often sharing his vast experience with his managers through times of change.

Highly respected by his colleagues, Mr Wink worked his way up through the civil service bandings and in 1997 he transferred from the MT garage to the Airfield MT section to work as an airfield operator - a role he still fulfills to this day.

It should be noted that Mr Wink reached the minimum retirement age in 2014 but chose to remain in service.

At the presentation Commodore Henry said: “We can all take something from Mr Wink’s incredible efforts and dedication to the MOD, it is not every day someone can say they have worked for the same organization for 50 years”.

Commodore Henry emphasized his point by adding: “I guarantee many of you in here were not born when Mr Wink began supporting the MOD in Gibraltar.”

RAF Gibraltar’s Station Commander, Wing Commander John Kane, commented that Mr Wink’s decision to remain in service was a decision that the Command had highly benefitted from. 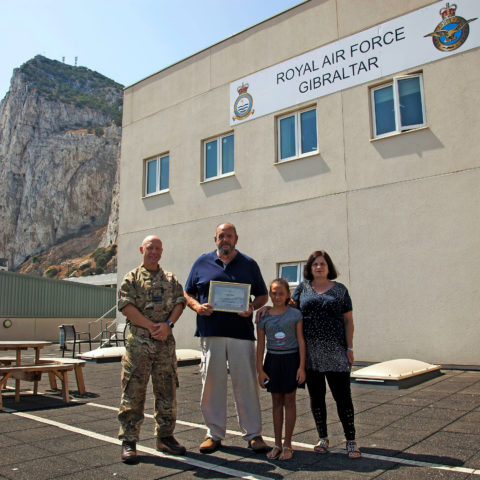 Wing Commander Kane went on to say: “It is a remarkable achievement for an individual to conduct 50 years’ service within the MOD; such selfless commitment and dedication we are especially grateful for.”

Mr Wink was thoroughly pleased with the award, stating: “It has been a pleasure working with the MOD for the past 50 years, and I want to thank you all for coming to this ceremony today.”

All members of British Forces Gibraltar, especially RAF Gibraltar, are extremely thankful for Joseph’s service and commitment to the MOD, and hope he has a fulfilling and highly deserved enjoyable retirement, now that he has decided to retire.