The third 9ball season tournament started off with a few new players, always great to see that 9ball is making a presence in the local sports scene. Twenty-three players turned up at the Europa Sports complex for the 2-day extravaganza.
The Heineken Cup, sponsored by Lewis Stagnetto, is composed of three events with the Top eight ranked players battling out for the Cup at the season finale in December.
First rounds saw some tight matches with Grant Black, last tournament’s runner up, edging through with a 4-3 win over Aidan Borg. Newcomers Sean Robba and Alejandro Muñoz both won their games 4-1. In the second round Andrew Olivero managed to get a great win against Alejandro Muñoz 4 -3, which was arguably the best game of the day.
Semi-finals started with John Skellett v Kevyn Torres, both of whom had come from the narrowest of margin wins to set up an exciting match. Both players looked drained and tired as this match started late into the evening on the Saturday and a few errors were made before reaching the deciding frame. Kevyn broke strongly potting 2balls and tried a long 1ball-9ball combo which he missed. John cleared the remainder with a lovely shot up the rail from the 7ball to the 8 which gave him an easy 9ball and a 5-4 win.
The other Semi-Final saw Michael Vasquez and Andrew Olivero. Both players started strongly, and Michael took the first frame, though Andrew bounced straight back and took the next four to edge a 4-1 lead. Michael brought one back to make it 4-2. Andrew then won the next frame to take a 5-2 win over Michael and book himself in the final.
John Skellett vs Andrew Olivero final. This match was played well into the night, and it showed as both players started making a few errors. This match had great safety play, clearances, and pressure even though the fatigue was apparent.
This semi also ended up with a deciding frame at 4-4. Both players shook hands sportingly and it was Andrew Olivero to break. His break was not fortunate and ended up in a sticky situation on the 1-ball, after a few exchanges John landed Andrew in a tight snooker to which Andrew fouled allowing John to take ball in hand. John cleared a few balls masterfully playing a nice bank shot on the 6ball, but this caused the 9ball to go down the table and end up behind the 8ball. This caused a nasty situation as John potted the 7ball and clipped the 8ball and it landed plump next to the 9ball with no clear potting option.
John decided to smash the 8ball against the 9ball to try to pot the 9 into bottom right but ended up potting the cue ball instead and that gave Andrew the perfect opportunity to win the match. Andrew Olivero calmly potted the 8ball and 9ball to be claimed Heineken Series 1 winner, commiserations John Skellett. 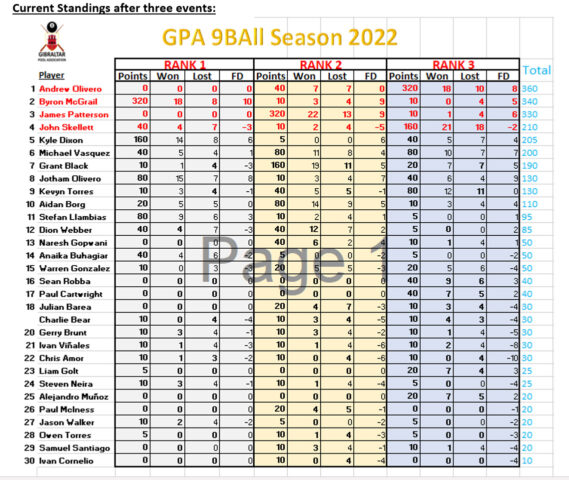 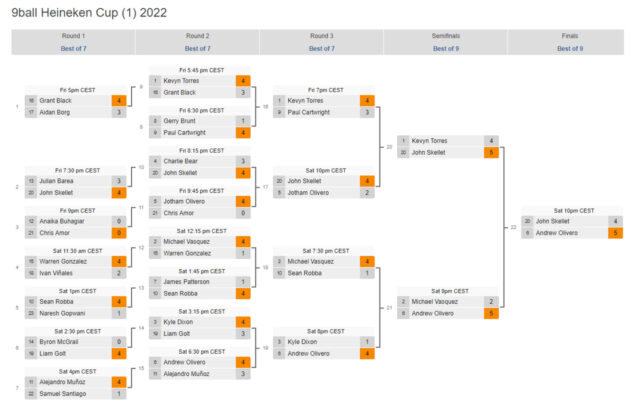 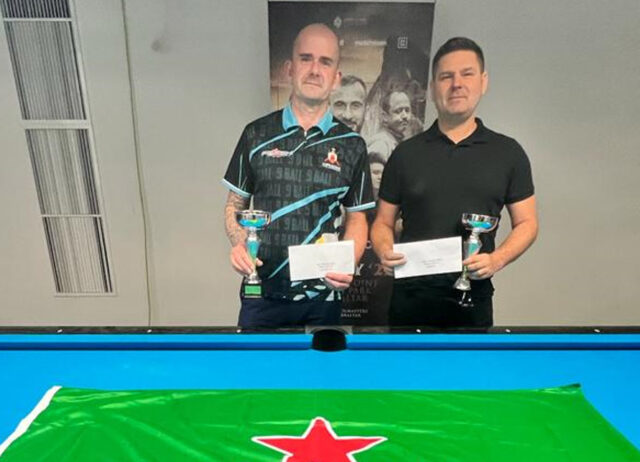