Great Britain's Benjamin Whittaker, refuses to wear his silver medal on the podium for the Men's Light Heavy (75-81kg) Final Bout at Kokugikan Arena on the twelfth day of the Tokyo 2020 Olympic Games in Japan. Picture date: Wednesday August 4, 2021.

By David Charlesworth, PA, Tokyo
Ben Whittaker settled for Olympic silver as, for the second day in a row, a British boxer came unstuck against a classy Cuban southpaw at the Kokugikan Arena.

Roniel Iglesias proved too classy for Pat McCormack in their men’s welterweight showpiece and, less than 24 hours on, Whittaker was powerless to stop Arlen Lopez charge to men’s light-heavyweight gold.

The taller Whittaker attempted to establish the range with his jab but was repeatedly beaten to the punch by his slick southpaw opponent, who won the first two rounds on four of the five judges’ scorecards. 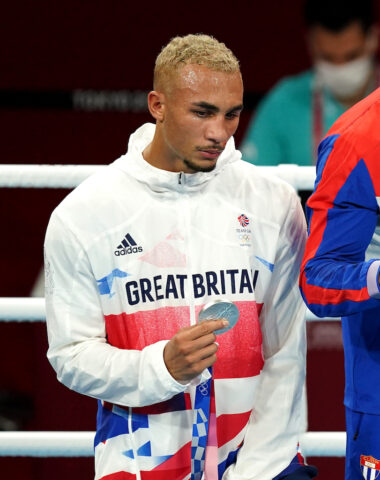 It left Whittaker with a mountain to climb and, while he edged the final round, Lopez was crowned gold medallist after getting the nod on four of the cards.

A bitterly disappointed Whittaker was in no mood to celebrate his silver medal afterwards.

“To me I feel like I’ve lost a gold. I can’t celebrate a silver yet,” he told the BBC. “I feel like a failure. For those waking up to see the result I’m sorry for letting you down.”

Meanwhile, Frazer Clarke’s bid to become the third successive Briton to reach the men’s super-heavyweight final was ended after he was stopped on cuts by top seed Bakhodir Jalolov.

Clarke was attempting to emulate Anthony Joshua at London 2012 and Joe Joyce at Rio 2016 but came into this contest with unhealed cuts above both eyes, sustained by headbutts in his disqualification win over Mourad Aliev.

He wobbled Jalolov with a bruising straight right in the second round, leading to a standing eight-count, but the Uzbekistani southpaw’s sensational movement and precision punching put him up on four of the five judges’ cards.

The cut over Clarke’s right eye was growing steadily worse in the third and final round and with Jalolov repeatedly targeting the area, the referee intervened. Clarke, however, had the consolation of claiming bronze for Team GB.