The Rock Cup draw will take place this Friday with one team already guaranteed a place in the quarter finals.
Bruno Magpies who find themselves falling short of a place in the top six of the domestic league with just two matches left to play for them secured their place in the quarter finals by winning last season’s Challenge Group division.
A total of twelve teams will compete in this season’s Rock Cup competition with Hounds Dogs entering the competition once again although playing in the intermediate league.
Eleven teams compete in the first round draw.
The first three teams drawn will also receive byes to the Quarter Finals, while the remaining eight teams will be paired into the First Round matches which are set to take place over the weekend of the 5-6 February 2022.
The winners of the Rock Cup will once again be guaranteed a place in the Europa Conference League. This becoming an opportunity for teams outside the top six to continue their bid to challenge for European club competition football.
The Rock Cup although shrouded in controversy last season saw Glacis United, who were at the time playing in the Challenge group division in the league reach the finals, losing to Lincoln Red Imps. This giving fourth placed Mons Calpe a chance to play in the Europa Conference League for the first time. 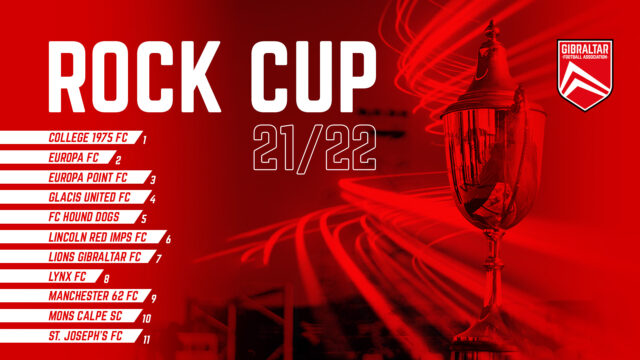