Christian Santos was invested as the new Mayor of Gibraltar yesterday, promising that City Hall will be a place where “everyone will feel welcome and at home.”
In his first act as mayor, Mr Santos will launch the “We Are One” campaign, where he will aim to celebrate the community and its diversity with a social media campaign and events in City Hall.
During the special ceremony held in City Hall on Tuesday, Carmen Gomez was invested as the Deputy Mayor for Gibraltar and the outgoing mayor, John Gonçalves, was recognised for his achievements during the past two years in the role.
Dignitaries including the Chief Minister, Fabian Picardo, the Governor of Gibraltar, Sir David Steel, and local MPs, Mr Santos’ husband, Samuel, as well as family and friends, were in attendance at the Mayor’s Parlour.
During his first speech as Mayor, Mr Santos paid tribute to his family and friends, who have stood behind him and supported him in all his personal and professional achievements.
Mr Santos thanked his predecessor, Mr Gonçalves, for the lessons he has learnt over the past two years, while welcoming working with Ms Gomez, who he described as a “woman who was ahead of her time and challenged stereotypes.”
“As a child, I was never the profile of a future mayor, or what was thought back then of what a mayor should be,” Mr Santos said.
“For my family I was a loudmouth, know-it-all, and was allowed to do my own thing.”
“I was always a dreamer who was never afraid to dream big, but I never thought those dreams could come true as I never really had a role model that I could identify with.”
“I always knew I had the eagerness and the drive to work towards my goals but, remember, this was in the 80s and early 90s and while other boys were sporty, I was artistic.”
“As a child, others around you may perceive you as different and make a choice as who they think you are and tell you about it.”
“For me, it was being gay. For other children it was their height, their weight, the way they looked, the colour of their skin, their disability or their religion.”
“Anything that made you different from the norm would be pointed out and not always kindly.” 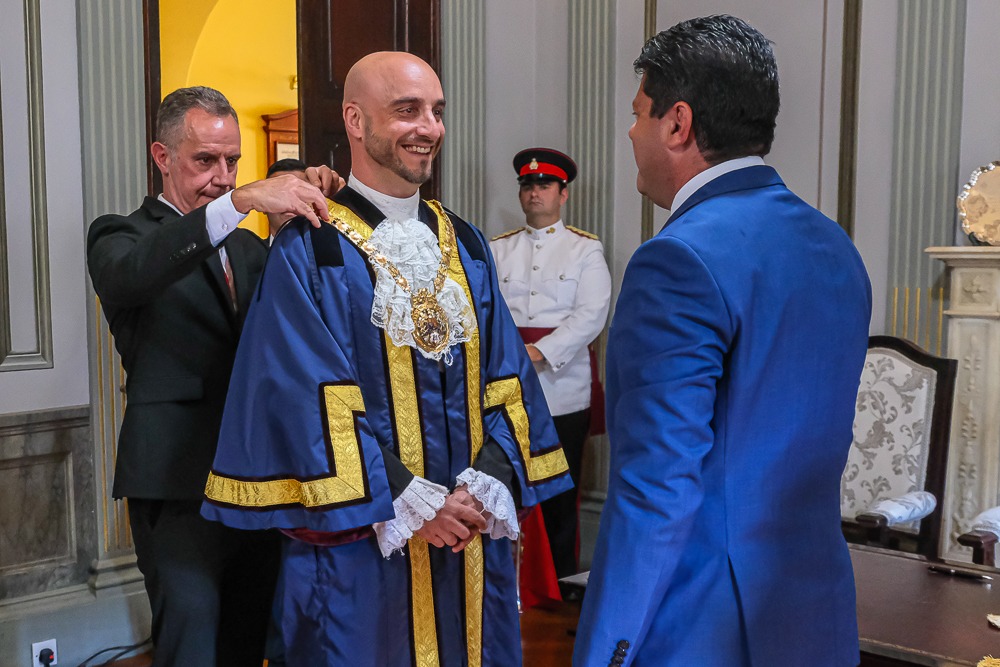 Mr Santos put it down to a strong support network that allowed him to “make the choice not to be the victim” and to love himself from a very young age.
In a message to youngsters, Mr Santos said they “should not let the opinion of others define you” while describing some of the criticism he received.
“During my time in office I will strive to represent Gibraltar with pride and respect to the best of my ability, my time at the City Hall, I pledge to all of you,” he said.
“To those young people who feel like they are not enough, to those who feel they are different, to those who don’t know what their future looks like, to those who feel they have to be a certain prototype to achieve their goals, the truth is you just need to be you and embrace your difference because that is what makes you who you are.”
“That is what makes you special and that is what will take you to where you want to be.”
“Once my tenure is over, I will look back at my time in office and tell that little boy with a head full of dreams that still lives inside of me ‘well done, you have done good.’”
Ms Gomez told the Chronicle she felt “very happy” at being honoured with the role of Deputy Mayor of Gibraltar and is looking forward to learning the intricacies of the role.
“It has been a very beautiful experience, and this will be a challenge, and I haven’t had a challenge for a very long time,” she said.
In his outgoing message, Mr Gonçalves described becoming mayor as the “greatest honour” bestowed upon him, with many unforgettable moments.
His time as Mayor was disrupted by the Covid-19 pandemic but, nevertheless, Mr Gonçalves was able to achieve his goals with the youngsters in the community and represent Gibraltar. 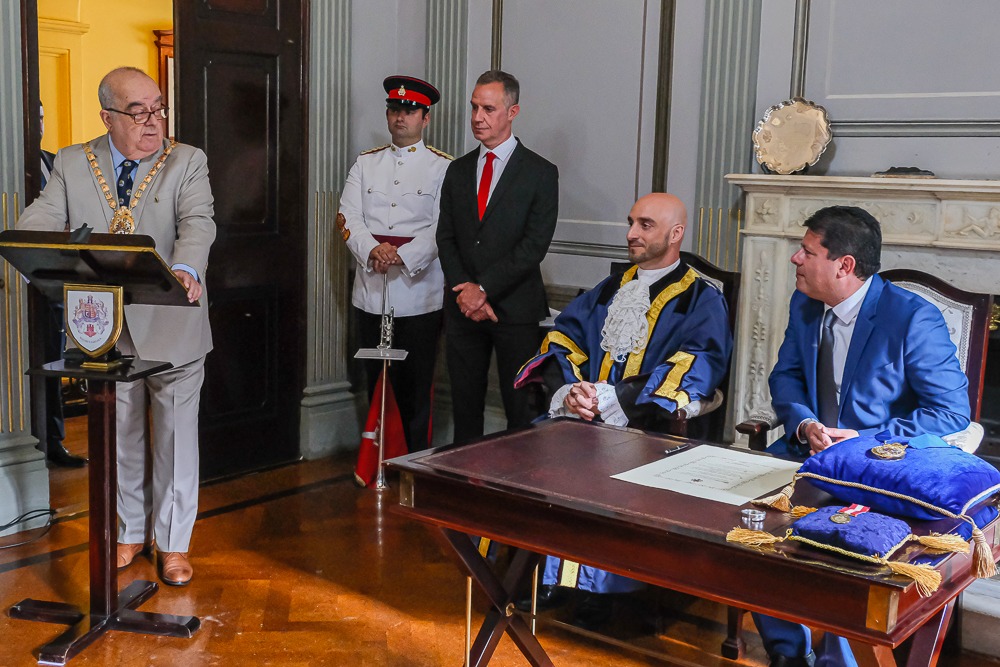 Addressing the Chief Minister in his speech, he said he would be “eternally grateful” for becoming the first Mayor that was “neither born in Gibraltar nor being British at birth to hold this prestigious position”.
Mr Picardo thanked Mr Gonçalves for his work over the past two years and for “picking up where he left off” after the Covid-19 lockdowns, especially in his work with the youth.
Mr Picardo said it is important that the “Mayoralty continues to be open to young people”, and is someone young people consider “approachable.”
He paid tribute to Mr Gonçalves, Mr Santos and Ms Gomez for their work in representing Gibraltar on an international platform in sport, music and drama. 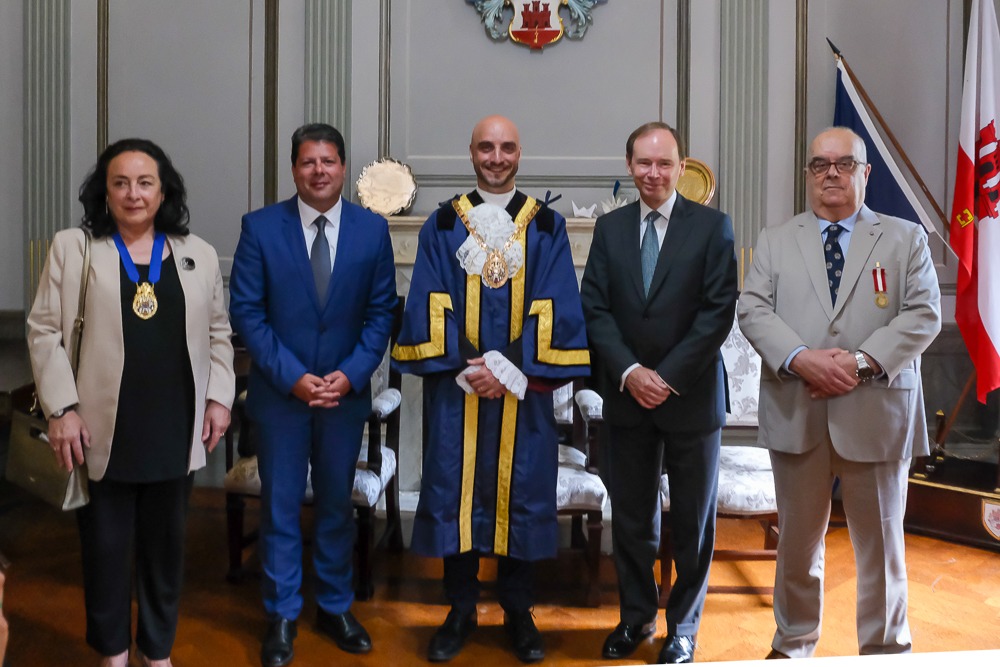 “It is appropriate that Christian Santos’s investiture as Mayor of Gibraltar should take place today, June 1,” Mr Picardo said.
“As Equality flags fly from some of Gibraltar’s main flagpoles in celebration of the start of Pride Month, we celebrate our own diversity by welcoming to this Civic Office our first openly gay Mayor.”
“Christian Santos is perfectly placed to spread the message of equality and diversity that we so cherish in Gibraltar.”