College 1975 keep Europa Point at foot of the table

Things could not have started any worse for Europa Point against College 1975. A match which saw two teams forecast as the most likely to be playing for places at the foot of the table saw College 1975 step forward with the first goal within the first ten minutes. A header from an unmarked Llaves Sanchez left much to be desired from Europa Points defence who had left him totally alone at the heart of the penalty area.
Europa Point struggled to find a pathway to College 1975’s goal. There was however, some good moments coming from players such as youngster Ellis Wilson who showed great confidence on the ball making it hard for defenders when he was on the ball. There was, however, little support for playmakers as they stepped forward.
College 1975 extended their lead on the twenty-first minute. Cawthorn was to receive a nicely placed pass across field setting him free on the run against his marker. Controlling well and turning his marker he put the ball well out of reach of Tuleda for College 1975’s second.
Europa Point who had shown little bite in attack when it came to the final finish had to wait until the 67th minute for a goal.
This time it was College 1975 who failed to mark their opponents leaving McCoy to receive unmarked at the top of the area to header past the keeper with nobody challenging him.
An unnecessary foul by Matto in front of the linesman as His team attacked saw him get his second yellow and left Europa Point with just ten men. With just seven minutes left for the full ninety minutes and with the match at a very scrappy stage it was an uphill struggle for Europa Point who looked for the equaliser. McCoy came close with a freekick but this was the only real chance Europa Point was to have before the final whistle. The match seeing more stop and starts than ever. Even with six minutes of injury time given it was not enough for Europa Point who sit at the foot of the table and will be counting the cost of their defeat against College 1975. 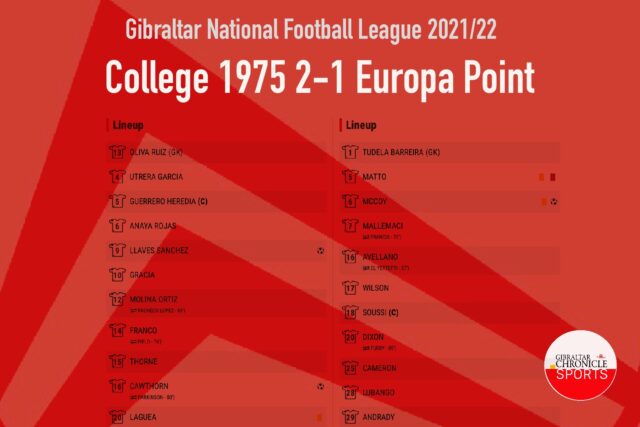