Gibraltar dressed in black and gold lined up for the national anthems where a handful of Gibraltar fans had travelled with the team and sang along with the them just before kick off in Andorra.
Gibraltar women’s starting eleven, with many of the names that had played against Liechtenstein and achieved their first victory included a debut for Ellie Mason. The latter a player presently based in England playing for Lewes FC women in the FA Championship. The England based player receiving many congratulations from organisations in the U.K. and also debuting on her birthday.
Mason was immediately in action testing Andorra’s midfield after combining with another player playing abroad, Charlyann Pizzarello. They were to prove to be among the two top players bringing confidence in a match which started to run away from them after three defensive errors.
Gibraltar entered the match with confidence trying to control possession and taking the game to the hosts.
Winning the ball from an Andorran throw-in Tiffany Viagas placed a through ball after just three minutes to Robba for the first opportunity. The Andorran keeper forced to intervene.
Gibraltar had Andorra penned back in the first five minutes with Pizzarello, Olivero and Mason all presenting a strong left flank for Gibraltat with Viagas and Robba in support.
Masons presence in midfield added that extra edge to Gibraltar’s presence on the pitch.
Andorra had their first chance after six minutes a through ball down the centre allowing their attacker to go one on one against the keeper. Revagliatte coming out well.
Gibraltar regained possession and went on the offensive again putting Andorra under pressure.
Pizzarello running down the left broke through to the byline her pass unfortunately not well met by Gilbert who was tightly marked running into the centre.
The hosts upped their game and started to place Gibraltar under pressure earning a corner and forcing a scrambled clearance from the goal mouth after ten minutes of play.
Gibraltar’s response was to regain possession and break fast but found themselves with Andorra also responding fast.
Kyrelle Revagliatte was a double hero for a moment after Andorra’s keepers long clearance left Kyrelle to have do fend off a double attempt after the ball had gone over Gibraltar’s defence. A double save saving Gibraltar from a first goal.
She was however, unable to do much when Andorra struck just a minute later on the 13th minute with a shot from outside the penalty area placed beyond Revagliatte’s reach. The player left unmarked as the ball reached her.
Andorra who had not had too much of the possession were not forgiving in their first direct hit to goal.
Andorra added a second on the sixteenth minute when a mistake in defence saw the ball given away easily leaving Andorra with a simple goal on a second attempt after Kyrelle had been able to block the first attempt. The second consecutive attempt was an attempt too far and she was but to do much as the ball fell to a second player also waiting in the centre unmarked.
The first yellow came after Robba was pulled to the ground deliberately as she broke from the halfway line. This stopping Gibraltar’s offensive run in its tracks.

Gibraltar started to get back into the match working through the left with Robba now on the left flank. There were calls for a penalty for handball after the Andorran captain blocked a freekick and looked to have done so with her arm. The calls ignored by the referee.
Just moments later Gilbert was denied a chance after being judged to be marginally offside as she broke free into goal.
A lack of marking in the centre of defence as Andorra moved the ball inside the penalty area led to the third goal by Gonzalvez on the 25th minute. With players not chasing back quickly enough to support the centre of Gibraltar’s defence, and a lack of adequate marking the defence found itself overwhelmed quickly and allowing ample space for Andorra to find goal.
With Andorra riding high in confidence with a three goal lead Gibraltar struggled to find a route into Andorra’s half.
Gibraltar were dealt a further blow when on the 38th minute Andorra played in a floated cross from a corner kick into the goalmouth area. Winning their header with ease the ball was glanced to the near post past the reach of Revagliatte for Andorra’s fourth.
Mason was to have an attempt for goal from a free kick driving a low drive past the far post just moments later.
Charylann Pizzarello was to bring on a moment of magic driving Gibraltar forward from defence and taking the ball into Andorra’s half. Receiving from Robba in a one touch move she was left to run into Andorra’s penalty area and forced a pass to Gilbert in the centre who made no mistake in diverting to goal.
Gibraltar able to cut the gap to 4-1 before half time through what was a moment of individual magic by Charylann Pizzarello.
Gibraltar started with some confidence in the second half Mason sending a through ball but being dumped on the ground in the subsequent challenge. This gave Gibraltar a chance to try their luck going forward. The freekick cleared but falling to Mason whose attempt fell comfortably into Andorra’s keepers arms.
A combination between Viagas, Olivero and Gilbert produce a nice sweeping passing move which earned Gibraltar a corner. The corner swung to the back of the defence saw Kayleigh Ferro coming in to head but glancing wide as she was challenged.
Gibraltar found themselves at the edge of Andorras penalty box as the match closed in on the hour mark. Shania Robba dribbling pass two was unable to find the final pass but just moments later received again and tried to set up Gilbert who was just inches from getting to find the shot at goal.
With greater confidence on the field, although still with a three goal deficit Gibraltar were gaining ground and pushing forward.
Naomi Victor was to launch another offensive driving forward from defence after Revagliatte had blocked well after an Andorra break. Victor was to feed Robba who was able to find her way to the edge of the box but again Andorra were able to clear the danger as Gilbert was crowded out.
Gibraltar momentarily had the run of play but were pushed back by Andorra who forced a freekick. captain Keisha Doody earning a yellow card.
A scramble inside the penalty area ended with a strike at goal from Andorra which once again saw Revagliatte making another good save.
Tiana Borrell was to come on for Tiffany Viagas on the 68th minute as Gibraltar were successfully winning ground on Andorra although still to find a clear route to goal. The young player having played well through the middle of the field although she had come onto the field just days after
Olivero was denied a goal after she was put through by Ferro. The officials judging Olivero to have been offside when she received.
A tighter defensive play by Gibraltar in the second half ensured that Andorra’s chances were limited with few chances as they reached the 75th minute.
Mason, who was playing further back added some strength in defence. She was however, to step forward on many occasions with Andorra struggling to take the all from her but able to steer her away from goal as they closed her down.
Further changes saw Laguea and Ballantine come on for Gibraltar on the 78th minute as Gibraltar added fresh legs on the field.
Mason and Ballantine were unfortunate with a long driven pass just going inches over Ballantine’s head after going over Andorra’s defence.
Gibraltar head coach Janssen Olivero was to make a further change on the 82nd bringing on Molly Karp for Shania Robba.
Gibraltar came close to goal with a corner from Gilbert gliding across the goalline and to goal kick on the 87th minute.
It was Gibraltar who was the more offensive in the latter moments as they searched to cut the deficit. Youngster Molly Karp showing her strength by winning the ball back for Gibraltar in midfield and launching a attack which was cut short by a string tackle. Gilbert taking over the offensive play but falling foul to an accident trip of a player.
Karp was to receive a yellow for what was construed as a strong challenge. Similar challenges against Gibraltar not receiving the same results although finishing with the same impact on players.
Gibraltar in the second half demonstrated that they were more than a match for Andorra although with a four goal deficit it had been an uphill struggle.
The second half was to see no goals, but was to leave Gibraltar with a positive feel as they now prepare to play Faroe Islands on Sunday at the Victoria Stadium.
The two friendly matches are an opportunity for Gibraltar players to gain international experience after a prolonged wait in arriving on the international football scene. 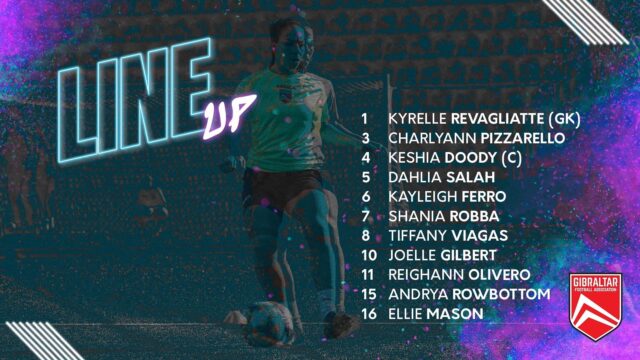