Could Similar policies to those used by the FA bring about the abolition of the home grown player rule?

Opinion and analysis by Stephen Ignacio

Can the home grown player rule be abolished without impacting on the protection of home grown players? These is among one of the many questions football has posed to itself in recent season as many clubs continue to resist the rules and consider them a harsh policy which has tied their hands behind their backs in many cases.
As was see just this past week the home grown player rule has seen clubs stumble, like in the case of Lions this week, and forced upon them points deductions when they have failed to implement the rules. In lions case an error in substitution earning them a forfeit and the loss of three points.
In the past years clubs such as Boca fell through the net after failing to meet the HGP requirements and finally losing their licence due to the number of forfeits they had earned.
The rules now forces clubs to have five players on the field, plus the use of two under 23 players if they were to make up to five changes instead of the traditional three, effectively forcing clubs to have up to eight home grown players within their playing list during match if they are not to risk breaching the rules. Detrimentally the rule itself now dictates the choices a coach has during his selection process and leave little margin for changes or even to create a competitive environment within teams with homegrown players, if limited in numbers, guaranteed a place on the field. This itself seen by many as detrimental to the progress of the game.
The rule which was meant to be in place to safeguard and protect home grown players, however, with the current pool of talented home grown players still small, has seen it being turned around where some home grown players have used it to increase their earning power providing at times little back in return knowing that with limited numbers clubs will be forced to use them.
At present the rule itself provides protection for up to eighty-eight home grown players plus a large majority of the under 23s who would need to be used within the intermediate league teams. It, however, has done little to increase competition for places or helped to improve the overall quality of football.
However, as was recently published by a social media platform catering for Spanish player playing abroad, Gibraltar football already employs over 196 Spanish nationals within the player and coaching ranks, twice as many in number as the number of home grown players protected by the present regulations.
Some clubs, faced with the prospect of increased wage demands from home grown players who use the rule as a bargaining chip have relied on keeping the numbers low whilst supplementing the rest of the squad with players from abroad, mainly regional clubs, whose wage demands are far lower in many cases but provide similar or greater experience on the field.
The abolition or reduction of the home grown player rule is, however, not something which is seen as possible. Few in football wishing to see a return to the days when Gibraltar’s football fields saw matches played with no home grown player on the field on many an occasion.

One of the Solutions
The rule was implemented at a time when Gibraltar football was unable to introduce a foreign player cap as it looked at respecting the Bosman ruling and European Union employment laws which were effective in Gibraltar.
With Gibraltar now effectively out of the EU the possibility of making changes has once again emerged, and using the same criteria the FA in England has used.
Last December The FA, the Premier League and EFL came together to agree a plan for entry requirements for overseas players post Brexit. 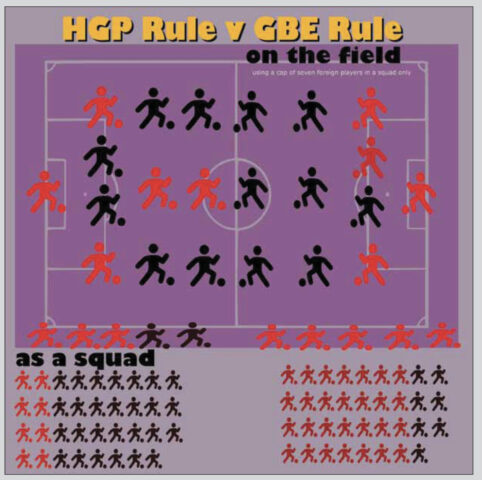 The Football’s Governing Body Endorsement (GBE) proposal were submitted to the UK Government by the FA, as the governing body for football, and were approved by The Home Office.
The criteria will provide the framework for Premier League and EFL clubs to sign overseas players now the UK has left the European Union (EU) after 31 December 2020.
Post Brexit, clubs will not be able to sign players freely from the EU. Players from EU countries who want to play in the Premier League or EFL will be required to gain a GBE, like all other overseas players without the right to work in the UK.

The GBE will operate a points-based system, where points are scored for senior and talented young players based on:
• Senior and youth international appearances
• Quality of the selling club, based on the league they are in, league position and progression in continental competition
• Club appearances, based on domestic league and continental competition minutes
Players accumulating the requisite amount of points will earn a GBE automatically, while players just below the threshold may be considered for a GBE by an Exceptions Panel.
The system meets the joint objectives of the Premier League, EFL and the FA allowing access to the best players and future talent for clubs, as well as safeguarding England teams, by ensuring opportunities for homegrown players.
Similar criterias have also been put in place for technical staff and woman’s football.
Although transposing the FA’s GBE criterias directly onto Gibraltar football is seen as impractical, with most if not all foreign players presently playing or involved in football being far from meeting the criteria, the potential scope to tweak the criteria to meet Gibraltar’s needs is present.
This would ensure that players and coaches entering Gibraltar football from abroad would require to be of a certain quality and experience which could only benefit Gibraltar football.
Similarly, Gibraltar’s exit from the EU also means that a home grown player cap can be replaced with a foreign player cap which could be introduced as on overall limit within a squad. Whilst the GBE criteria will itself lower the number of foreign players and technical staff that can be employed by clubs due to financial constraints a limit on the numbers of foreign players within a squad could replace the existing home grown player rule.
By limiting the numbers within a squad and not enforcing any policy on the numbers on the field this would effectively free up the choices coaching staff can make on their selection process and bring back the competitive environment for players to challenge for positions on the field.
Problems such as those which have seen clubs default on substitutions would also be a thing of the past with players chosen solely on footballing decisions and not on the politics surrounding it.
The introduction of the GBE, tweaked to meet Gibraltar standards, would enhance not only the quality of players on the field but also the technical staff, including coaches which clubs would be using if brought from abroad.
With financial constraints among one of the biggest challenges clubs will face, such a change would also force clubs to look inwards towards the local player and coaching pool and focus their attention towards the development of players. 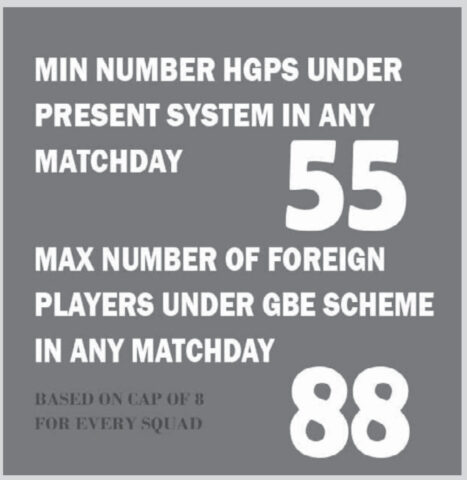 Whilst the home grown player rules are only effective during the domestic season and have played no role in the choices made during European club competition time for those involved. The introduction of a GBE policy would operate all year round whereby clubs would need to meet the employment criteria for players to be able to play for local clubs. Therefore protecting home grown players and providing greater access to involvement in European club competition football.
The introduction of the GBE would also effectively stop the mass migration of free agents from Spain into Gibraltar with clubs forced to look at the quality of the player and not just the financial costs.
In the English Premier League, the number of overseas U21 players a club can sign was also limited to three in the January transfer window and six per season moving forwards. This now enables the recruitment of the best players from around the world to train and play together with homegrown talent. Under FIFA’s rules, the UK’s exit from the EU will also mean that clubs will not be able to sign players from overseas until they are 18. The latter also applicable to Gibraltar. Similar conditions for the Under 21s could be proposed for Gibraltar ensuring that Gibraltar can attract young developing talents but at the same time protect its own.
The one thing that many in football are certain about is that there is no room in Gibraltar football for the exclusion of foreign players or coaches from its leagues. Many highlighting that many of the improvements seen come from the experience many have brought to the local game which has been transposed to local players. An increase in the quality of player attracted to Gibraltar likely to see this further developed.