The George Federico Darts Hall was a hive of activity once again for the fourth of seven Ranking Tournaments, the Europa Stadium Singles.

Early rounds of this seeded tournament are played as best of 7 legs and played over 8 boards, with 8 seeded players.

Seed Nos. 1 Dyson Parody, 2 Antony Lopez & 7 Justin Hewitt all reached the Quarter Finals without losing a single leg. Seed 3 David Francis had a tough game Vs 10 year old Nico Bado who is surely a star of the future but was able to win 4-3. No4 Seed Roy Asquez was unable to keep up with Carlos Muñoz who beat him 4-0. Seed No5 fell at the first match losing 4-1 to veteran George Ramos, & No.6 Seed Craig Galliano won his board against Justin Broton 4-1.

Dylan Duo kept up the pace with strong scoring against Carlos Muñoz winning 5-2 and claiming his 1st Ranking final spot of the season.

Craig Galliano faced off against his former Youth Team-mate and was able to keep ahead of him securing a 5-2 win. 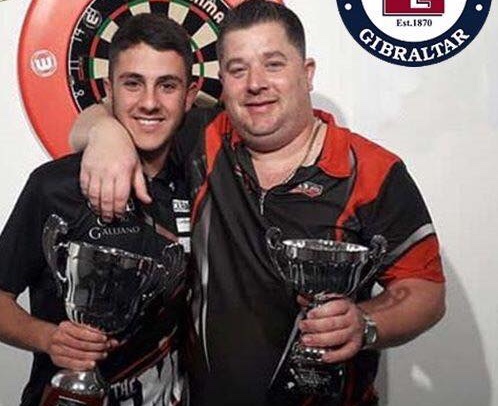 Dylan won the Bull throw but some erratic scoring from him meant that Craig threw for a double first checking out D10 with Dylan trailing on 259.

The next 2 legs were much closer affairs with a few missed doubles but Craig managed to mark-up a 3-0 lead. Dylan then took out a D10 to take his 1st leg of the Final.

From then one Craig pulled ahead in each leg and hit D20 in the 7th to claim the title.