By Lisa Salmon
As a GP and someone who works in the holistic health field, Dr Jerry Thompson has long been interested in the things that keep people well.

In his new book – Curing The Incurable – he delves into some astounding stories of recovery, including people with cancer and neurodegenerative diseases who went on to beat the odds, and looks at what these remarkable cases have in common. 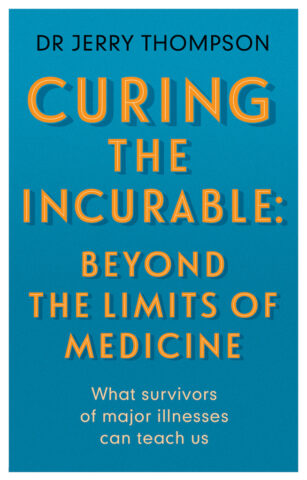 Thompson, who is also a member of the British Society for Ecological Medicine (BSEM), says in the book: “By far the commonest experiences are recoveries from cancer. These have typically been against their doctors’ expectations.

“I have long wondered if there was a common thread to these cases. I believe these discoveries can shed light on how our body heals. How much untapped healing potential exists within the human body? Is medicine missing something fundamental?”

One of the ‘miracle’ stories recounted in the book is that of middle-aged cancer patient Elaine Nussbaum, who developed a uterus sarcoma. After two years of treatment, including surgery, radiotherapy and chemotherapy, the cancer spread to her bones and lungs, leaving her wheelchair-bound, depressed and in pain, taking multiple pills a day and “waiting for death”.

But she started a macrobiotic diet that had helped a doctor with prostate cancer become pain-free. “After six months, she was walking, happy, optimistic, free of pain and not taking any pills,” says Thompson. “Two years later, X-rays confirmed the tumours in her bones and lungs had gone. Twenty-two years later, she was alive and well.”

In the book, he outlines a set of principles he believes play a crucial role in healing. These include the need for specific types of nutrition, exercise, life purpose, and avoiding stress, electromagnetic smog and toxicity.
Here, Thompson tells us more…

What are your general principles of healing?
“The life force (vitality) of the body needs to be greater than that of the disease. Put another way, if we increase what the body needs, which may be physical, psychological or spiritual (nutrition, exercise, love, sleep, sunlight, purpose in life) and decrease anything that reduces the body’s vitality (stress, electromagnetic smog, inflammation, toxicity) then the body can reach a tipping point when it can overcome an illness.”

Are there people who follow these principles and still don’t get better?
“Absolutely – and this is why stories of those who did well but relapsed are important. Dr David Servan-Schreiber is an example. He had a brain tumour and was given less than six months to live. He died nearly 20 years later and agonised about whether the advice he gave in his book, Anti Cancer, was correct. He concluded his advice was correct, as he’d lived an exceptionally long time, but realised he’d not taken his own advice and was living a hectic schedule, giving lectures all over the world.

“There are other reasons [too]: people’s ability to detoxify specific chemicals can vary a thousand-fold.”

Do you think mindset plays a part?
“A positive mindset is important” says Thompson – although he doesn’t think it should be the only thing we’re relying on. Plus, various other individual factors still form part of the overall picture – which is always important to remember. “Most people should use mind power as an adjunct to healing, rather than as a sole method,” he says.

Are some people genetically more able to recover from serious illness than others?
“Without a doubt. If you have the APOE type 2 gene (sometimes known as the ‘immortality gene’), you might live a long life despite a poor diet, smoking, drinking and taking little exercise. The opposite occurs with type APOE type 4, where even a good diet and good habits might not be enough. However, people will still do much better if they use these principles.”

Do people need to understand that cases such as Elaine Nussbaum’s are very rare and it’s unlikely most people will cure themselves, or do they need to think, ‘They can do it, so can I’?

“These cases are certainly very rare and everything needed to be right for Elaine Nussbaum’s cure to take place: nutritionally right (in her case macrobiotics), mentally right (she believed she’d get better and believed in her therapist) and energetically right (she used shiatsu). But these cases are getting far more common nowadays and survivors have acted as guides, telling us what we once thought impossible is possible. So yes, these cases are rare but I hope the book encourages an attitude of, ‘She did it, so can I’.”

What’s your advice to someone who’s just been diagnosed with a very serious or incurable illness?
“I’m often faced with people in this situation. I give them as much information as they need and tell them where they can get more information, but don’t push this. I find most patients will just do what their specialist tells them to do and nothing more. They’re only slightly interested in what I say. They don’t want to take control of their health. That certainly surprises me. But there are a few patients who want to know everything they can do to help themselves get better – and my book is for these people, as there’s a great deal they can do.”
(PA)

Andalucia seals off region in Covid-19 move, with knock-on impact at border with Gibraltar

‘The Air that I breathe’ in the UK album charts again

The Calpe Conference 2020: A personal view Part One