Cyclists complete over 3,000km trip from Slovenia to Gibraltar

Over 20 cyclists pedalled into Gibraltar recently marking it the end of their 3,040km month long trip from Ljubljana, Slovenia.

Assisted by the crew along the journey the tour operator TDA Global Cycling brought together cyclists from all four corners of the globe.

The ride was one of the longer ones undertaken on the route and started in Ronda, Spain. 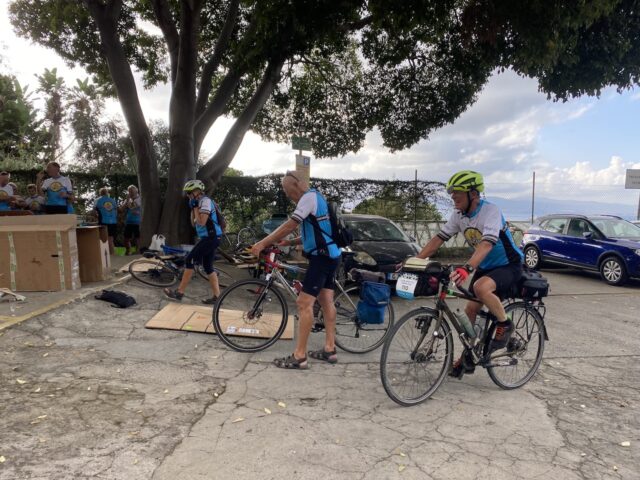 However, one cyclist, Brenda Trenholme, who is from Rossland in British Columbia, Canada, travelled from even further away.

“I started in Athens and I went through the Greek mountains and I was in the interior of Greece, I crossed the Apennines three times on this trip self-supported. And, then I met up with this group and we have had a fair amount of climbing but I am used to climbing,” she said. 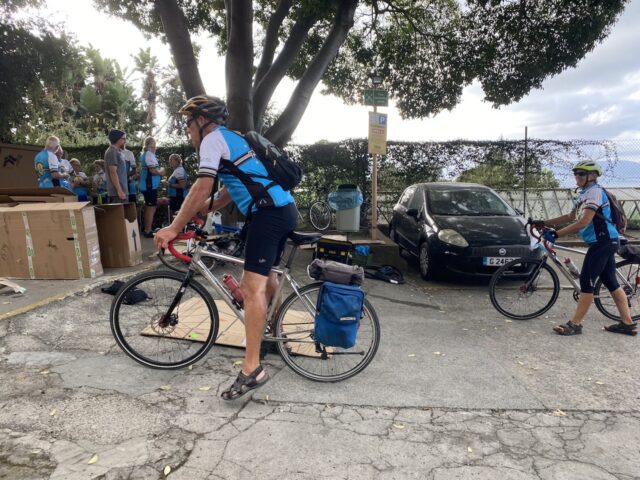 This was her third TDA tour and she usually does self-supported tours on her own. Her previous tours with the company were from Beijing to Istanbul, 13,000km and from Cairo to Cape Town, 12,000km, camping most of the way.

“This tour was kind of a piece of cake, there was hotels, it was very gentrified, it was very fun. It was great to get out of Canada and go on another tour,” she added.

Also from Canada was Wallace King who is from Tuktoyaktuk, an Inuit village on the Arctic Ocean.

“It was wonderful,” he said.

“The weather was great, we had first class hotels, first class meals and the crew was exceptional.”

“This is the tenth organised group ride I have been on with different outfits and this group of four guys [the crew] and their dynamics as they got along so well, joking and the next thing we are all involved joking and laughing so it made a great relationship base. It starts almost right from the crew and how they treat us and prepare our meals.”

He believes the beauty of some of the Mediterranean coast was the highlight of his trip.

“Looking down on the little towns that surround it. Just the natural beauty of it. There was a lot of highlight but that would probably be it. We did lots of climbing so we then get these tremendous views down on the coast of small town and sandy beaches,” said Mr King.

Simon Boyd is originally from Burton Upon Trent in the UK and has always been a cyclist. When asked why he decided on this tour he simply said it was meant to work.

“This tour was meant to have started in Budapest [Hungary] two days after a golf charity tournament which I always do in Budapest every year. So I signed up for it but because of Covid regulations and everything they had to shorten it by another week so we ended up starting in Ljubljana. So the plans got a little messed up but it fun anyway. Ljubljana to Gibraltar is a long way,” he said.

This tour makes it the longest one Mr Boyd has undertaken, before Covid he had cycled with the company from Dublin, Ireland to Copenhagen, Denmark but the recent tour is roughly 500km longer.

“I was also surprised by Southern Spain and Andalucía going through those plains and sierras was absolutely wonderful. And, the group of people have been great, I have really enjoyed it,” he said.

Hailing from the other side of the world, Bondi Beach, Sydney, Australia was Kim Wright who was cycling alongside her Canadian partner Kevin.

“So as you know Australian borders have been shut for nearly 18 months so I have pretty much been trapped overseas for over a year now and so I decided to just cycle around Europe with my partner. So I am pretty much marking time until I can go home,” she said.

“It is a fabulous trip. I have done lots of cycling touring but this trip has been really interesting from Slovenia a beautiful country and all the way through, so yes I have fully enjoyed it.”

Her highlight of the trip was the Spanish section from Granada.

“It has been amazing through the mountains, gorgeous scenery, tough climbing but it has been fun,” she said.

As the group cycled into the Rock Hotel car park the crew were there ready to start breaking down the bikes and placing them inside carboard boxes ready to ship them back home.

Champagne and nibbles also greeted the cyclists as they arrived to their destination.