The GSA got the Christmas period off to a fine start with its annual Christmas Jamón tournament kindly sponsored by Damex, the festively named teams all competing for the coveted jamón prize.
The tournament started with a league section to determine the teams that would progress to the knockout. Six of Santa’s reindeer-named teams pulled through to the knockout phase (Rudolf, Vixen, Dasher, Prancer, Dancer and Comet). They were joined by the Elves and the Fairies. Vixen and Dasher looked like the teams to beat, both winning their pools convincingly and continued their form in the quarter finals to take them into the semi finals.
Team Rudolph lost the quarter finals to the Elves and were unable to even win the reddest nose competition, team Comet taking that particular prize and the remaining semi final place by beating team Dancer 79-78! Vixen saw off the Elves 82-69 in the first semi whilst Dasher continued their good pool form to continue to the final, beating Comet 79-63.
The final consisted of three games, first up in the third string game was John Potton (Dasher) and Ricardo Cravo (Vixen). Potton was playing his characteristic mix of well placed lobs and delicate drops, but Cravo’s speed and agility around the court allowed him to take both the first game and second games 11-6. The third game was closer, going to a sudden death tie break, Cravo taking the game to give team Vixen the advantage. 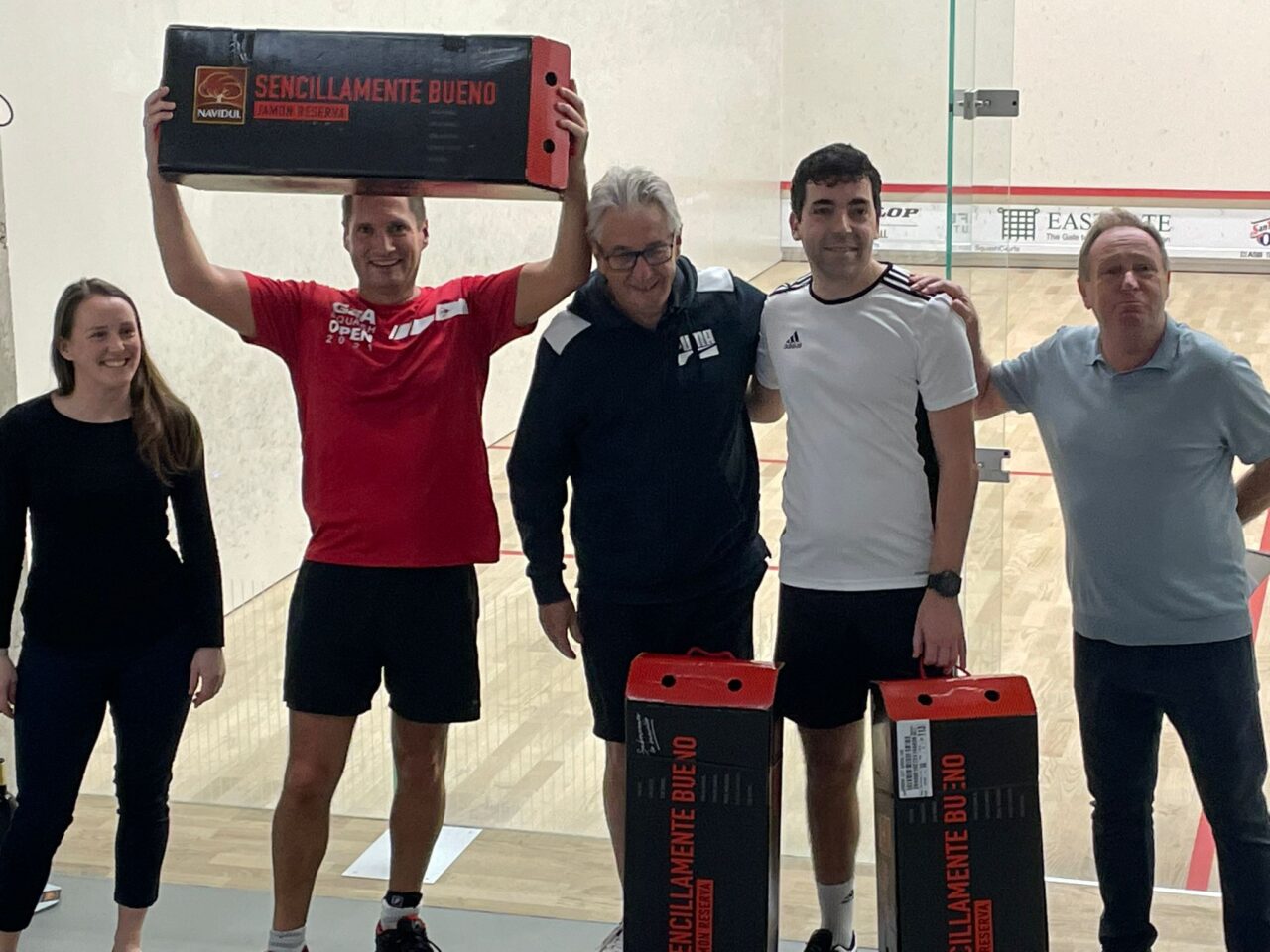 Next up was Pat Nerney (Vixen) against Michael Valarino (Dasher). In a close-fought match, Nerney took the first game in a tie break 11-10 to set up a narrow lead, but Valarino fought back to take the second game in another tight game, 11-7. In the final game Valarino managed to accelerate away building a comfortable lead to take the third 11-2.
The match was to be decided on points difference, so Dasher went into the final match with a slender one point advantage. Liam Bedford (Dasher) taking on Graham Ray (Vixen), the match pitted Ray’s wile against Bedford’s accuracy. Ray crafted a strong lead in the first game which he converted to take the first, 11-6. A second game following the same pattern gave Ray a 9 point lead in the match. Bedford would need to win the match 11-2 to take the title. Ray quickly secured the title using all parts of his racquet to clinch it, Bedford getting a consolation prize of winning the final with the best shot of the night!
Damex Jamón Christmas tournament winners:
Team Vixen: Graham Ray, Patrick Nerney, Ricardo Cravo.
Runners Up: Liam Bedford, Michael Valerino, John Potton.